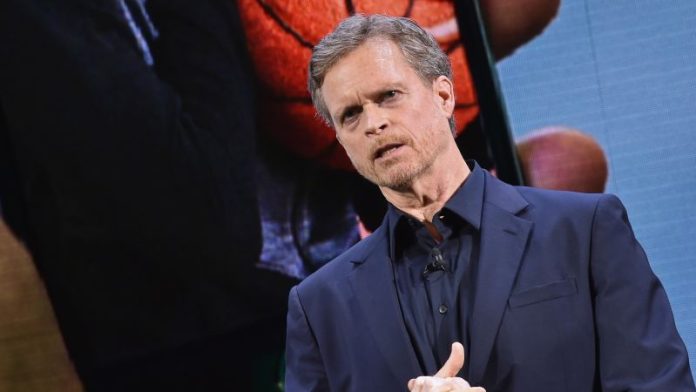 Parker, a Disney board member since 2016, takes over Disney’s board at a time of transition for America’s largest media company. Bob Iger recently returned as CEO after a brief hiatus.

“Mark Parker’s vision, incredible depth of experience and wise counsel have been invaluable to Disney, and I look forward to continuing working with him in his new role, along with our other directors, as we chart the future course for this amazing company,” said Iger in a statement.

In 2019, Parker stepped down as Nike’s CEO after 13 years at the helm. Disney said among Parker’s qualifications as board chair is that he navigated a successful CEO transition at Nike. Disney announced Wednesday the formation of a CEO succession committee to replace Iger, who said in November he would return as chief executive for only a two-year stint.

“It is the top priority of mine and the Board’s to identify and prepare a successful CEO successor, and that process has already begun,” Parker said in a statement Wednesday.

Among the problems facing Disney: Its streaming business lost $1.5 billion in the fourth quarter. And Disney’s media networks are struggling as cord cutting accelerates and once lucrative outlets like ESPN lose viewership. Dan Loeb, the activist investor and Third Point CEO, made headlines in August when he suggested “a strong case can be made that the ESPN business should be spun off to shareholders with an appropriate debt load.”

Another activist shareholder group, Trian Partners, nominated its leader Nelson Peltz as a director. Disney said Wednesday it will work with Peltz but opposed his appointment to the board.

“Mr. Iger’s mandate is to use his two-year term and depth of experience in the industry to adapt the business model for the shifting media landscape, rebalancing investment with revenue opportunity while bringing a renewed focus on the creative talent that has made The Walt Disney Company the envy of the industry,” the company said in its opposition of Peltz.

Arnold, the outgoing chairwoman, had served on Disney’s board since 2007. She was announced as the board’s leader on December 31, 2021.

She praised Parker for helping lead Disney through a difficult period for the company and the broader media industry.

“Mark Parker is an incredibly well-respected leader who over seven years as a Disney director has helped the company effectively navigate through a time of unprecedented change,” Arnold said in a statement.

Iger praised Arnold for “superb leadership … and for her tireless work over the past 15 years as an exemplary steward of the Disney brand.”

News - April 1, 2022 0
Labour leader Sir Keir Starmer has suggested the Government’s double U-turn on the banning of conversion therapy was meant as a distraction from the...

Earnings reports show the Fed is making progress on inflation

News - October 20, 2022 0
CNBC's Jim Cramer on Thursday told investors that the market is finally seeing signs that the Federal Reserve is succeeding in its fight against...

News - July 9, 2022 0
We're just days away from Amazon's annual Prime Day extravaganza beginning July 12th which is sure to offer some great savings on just about...
© 2022 Venture Current is a Flag Media LLC Publication. All Rights Reserved.
VC is part of the FLAG Token rewards network. Clients and partners can use FLAG Tokens for VC products and services.
VC runs 'Automatic' software. Stories posted here come from generic-topic Google news RSS feeds as well as client and partner-approved content.
If a story appears on this page that needs to be deleted due to licensing issues, please message us immediately so we can help you.