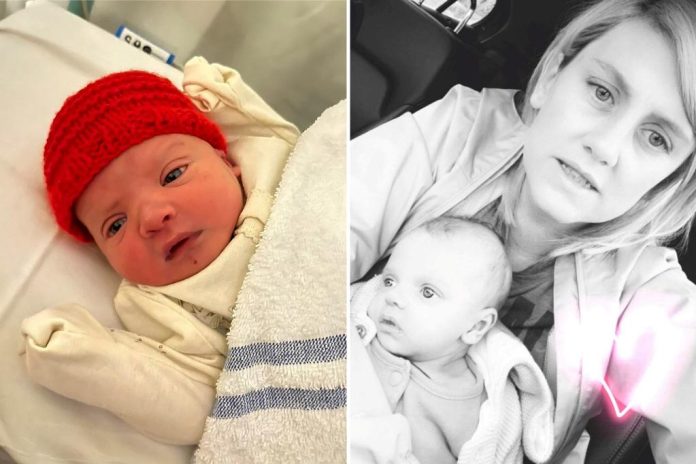 A mother says her “gut instinct” told her something was wrong with her baby boy immediately after she gave birth — and doctors soon delivered a devastating diagnosis.

Hannah Doyle’s son, Zander, was diagnosed with Chromosome Deletion Syndrome — a condition that can cause severe congenital anomalies, as well as significant intellectual and physical disabilities.

Doyle, 36, welcomed baby Zander back in October but says she was certain something was unusual as soon as she held him in her arms.

“When I did skin-to-skin contact, he was just different to my other babies and I instantly knew there was something different,” the mom-of-four told South West News Service.

“When I looked at his eyes, they were very swollen and did look a bit almond-like,” she added. “I do believe to this day that it was him telling me, because his eyes look totally different now.”

Doyle first became concerned about her unborn baby when she was 26 weeks pregnant. At that time, she found out he had two holes in his heart.

But after giving birth and realizing that baby Xander looked nothing like her other children, she begged doctors to carry out further tests.

Sure enough, the newborn was diagnosed with Chromosome Deletion Syndrome, which results from a loss of parts of chromosomes.

Depending on the location and size, there are several known variations of chromosome deletions. According to Stanford Medicine, 22q11.2 deletion syndrome is the most common, occurring every 1 per 4000–6000 live births.

In children with this syndrome, a tiny piece of chromosome 22 is missing, which can cause a variety of problems, ranging from heart defects to developmental delays and seizures. There may also be physical abnormalities that affect the appearance of eyes, nose and ears.

“It was a shock and it felt really daunting and really scary because your mind goes into overload and you just start thinking the worst,” Doyle stated. “It was harder because there wasn’t really much explanation to it.”

Indeed, Doyle is yet to learn the severity of Zander’s symptoms and says it will take time to learn how much Chromosome Deletion Syndrome affects him in the future.

“Waiting is the hardest thing because with any other medical condition there are more answers,” she explained. “I can’t find anyone else with the same particular deletion that Zander’s got missing so there’s not even anyone else to compare him to.”

“It could have no impact on him whatsoever or it could,” the mama added, “But the not knowing is hard because you read things and wonder if it will impact him.”

For now, however, the 10-week-old tot is just like another ordinary baby.

“He’s doing really well and he’s a happy little baby,” Doyle declared. “He’s on the prescription formula which is helping him grow.

IMF warns of need to be ‘very, very vigilant’ over rising inflation risks

News - October 12, 2021 0
The global economy is entering a phase of inflationary risk, the IMF warned on Tuesday, as it called on central banks to be “very,...

Nasdaq Inc. stock outperforms competitors despite losses on the day

News - October 15, 2021 0
This week, Microsoft and Nvidia announced that they trained what they claim is one of the largest and most capable AI language models to...

What is America’s end-game for the war in Ukraine?

News - May 29, 2022 0
Shortly before Russia launched its invasion of Ukraine in February, General Mark Milley, the chair of the Joint Chiefs of Staff, gave a pessimistic...

News - August 23, 2022 0
Ukrainian U.N. Ambassador Sergiy Kyslytsya is pictured during a meeting of the U.N. Security Council on August 23, 2022. Kyslytsya denounced Russia for accusing...
© 2022 Venture Current is a Flag Media LLC Publication. All Rights Reserved.
VC is part of the FLAG Token rewards network. Clients and partners can use FLAG Tokens for VC products and services.
VC runs 'Automatic' software. Stories posted here come from generic-topic Google news RSS feeds as well as client and partner-approved content.
If a story appears on this page that needs to be deleted due to licensing issues, please message us immediately so we can help you.