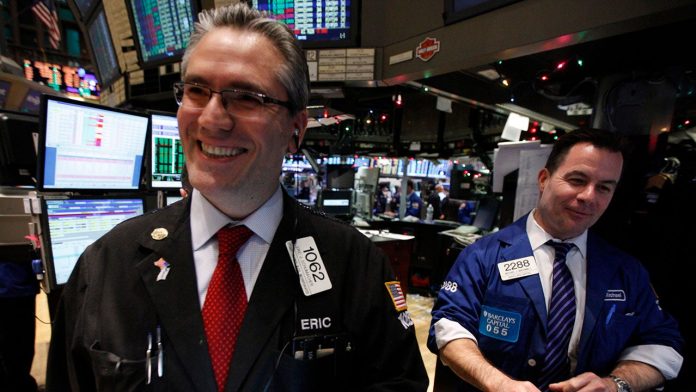 The major U.S. benchmarks are rebounding from Thursday’s losses as stocks look to end the week on a high note with commodities like oil and gold jumping well into positive territory.

Just before the closing bell, the Dow Jones Industrial Average was up roughly 700 points, or 2.1%; the S&P 500 was approximately 2.40% higher; and the Nasdaq Composite was up around 2.7% as beleaguered tech stocks find big gains on Friday.

U.S. nonfarm payrolls rose by 223,000 jobs in December, Labor Department data showed, while a 0.3% rise in average earnings was smaller than expected and less than the previous month’s 0.4%.

America’s employers added a solid 223,000 jobs in December, evidence that the economy remains healthy yet also a sign that the Federal Reserve may still have to raise interest rates aggressively to slow growth and cool inflation.  (AP Photo/Nam Y. Huh / AP Images)

DECEMBER JOBS BREAKDOWN: WHICH INDUSTRIES ARE HIRING THE MOST WORKERS?

“The stock market’s wondering today did Goldilocks just enter the room? Did the Fed pull it off? Did they slow the economy and not employment?” said John Augustine, chief investment officer at Huntington National Bank in Columbus, Ohio, who saw the services and jobs reports as investors’ cue to resume buying.

VINCE MCMAHON IS BACK AT WWE, SHAREHOLDERS HOPE TO BENEFIT

After trading in the red for much of the week, shares of Apple, Meta, Amazon and Nvidia are all roughly 3% in the green, helping lift the Nasdaq to a session win.

Blue-chip stocks like American Express, Boeing and Nike are all above the redline to move the Dow even higher, while energy stocks across the Standards & Poor’s has the index positioned for a win on Friday.

Reuters contributed to this report.

GET FOX BUSINESS ON THE GO BY CLICKING HERE

News - March 8, 2022 0
Poland is prepared to put all its MiG-29 fighter jets at the disposal of the US, the foreign ministry said on Tuesday, amid a...

News - July 20, 2022 0
Weakening economic outlook, high inflation and affordability challenges took a toll on buyer demand, leading to a drop in both purchase and refi applications...

News - November 8, 2022 0
As inflation continues to impact Americans, many experts fear the country is headed for a recession. Last week, interest rates were raised for the...
© 2022 Venture Current is a Flag Media LLC Publication. All Rights Reserved.
VC is part of the FLAG Token rewards network. Clients and partners can use FLAG Tokens for VC products and services.
VC runs 'Automatic' software. Stories posted here come from generic-topic Google news RSS feeds as well as client and partner-approved content.
If a story appears on this page that needs to be deleted due to licensing issues, please message us immediately so we can help you.