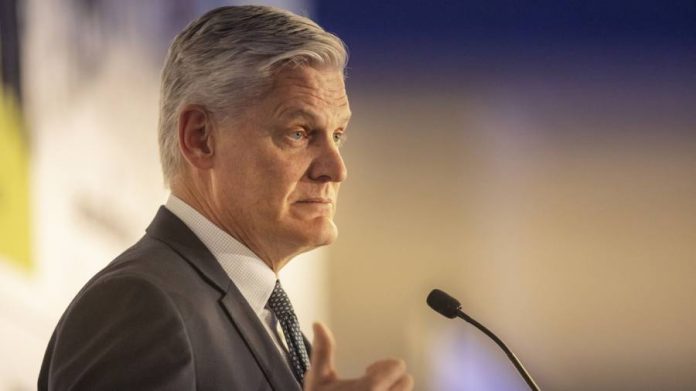 The chief executive of South Africa’s troubled Eskom state power monopoly told police that he survived an attempt to kill him with cyanide-laced coffee, according to a government minister.

André de Ruyter was allegedly targeted a day after he submitted his resignation from the blackout-prone utility last month, just before his exit was made public. He blamed lack of support from within President Cyril Ramaphosa’s government in a battle to stem the worst ever blackouts in Africa’s most industrial nation and to tackle rampant graft within the company.

Pravin Gordhan, the minister overseeing Eskom and other state companies, on Saturday confirmed that de Ruyter had informed him of the alleged attempt to poison him. “This attempt on his life will be thoroughly investigated and those responsible must be charged,” Gordhan told the Financial Times.

De Ruyter, who will stay on as Eskom chief executive until the end of March while a replacement is found, did not immediately respond to a request for comment.

The alleged poisoning underscores the threat to a campaign by Ramaphosa to clear out corruption from South Africa’s state-owned companies, linchpins of the economy, even after he strengthened his grip on the ruling African National Congress in December with his re-election as leader.

South Africa’s EE Business Intelligence first reported on Saturday that de Ruyter had fallen violently ill after drinking coffee at Eskom’s headquarters and been rushed to doctors who found he had elevated levels of cyanide.

De Ruyter told the publication: “I have reported the matter to [the South African police] on 5 January 2023, and the case can be assumed to be under investigation.”

Eskom’s crisis is seen as the single-biggest threat to the South African economy and to the ANC’s decades-long grip on power ahead of national elections next year.

In 2022 South Africans endured twice as many power outages as the year before as breakdowns mounted in Eskom’s workhorse fleet of ageing coal power stations. Newer coal plants also constantly malfunction. The power cuts continued throughout South Africa’s holiday season and into the new year.

De Ruyter made many enemies after his appointment in late 2019, as he launched investigations into alleged criminal syndicates that he accused of worsening the blackouts by pilfering supplies from coal power stations and sabotaging attempts to fix problems.

He is protected at all times by a bodyguard, as are other senior executives and even some power station operators at the company.

“Make no mistake Mpumalanga is a gangster province,” de Ruyter told the FT in October, referring to the coal-producing region where many of Eskom’s power stations are located. “We’ve had contractors shot in their cars on the way to site because they didn’t give jobs to the right people.”

The alleged attempt to murder de Ruyter “shows the intense battle taking place between those who want South Africa to work and thrive; and those who want to corruptly enrich themselves,” Gordhan said.

Heavily indebted Eskom has struggled to fund plant maintenance and replenish diesel that is needed for emergency power reserves.

In delayed annual financial statements that were released last month, Eskom’s auditors warned of “significant control deficiencies” in the supply of coal, fuel and spare parts to power stations. In one incident, the auditors added, key documents “were purposefully destroyed in a fire” after they requested them.

South Africa has seen a marked increase in politically linked killings in recent years, from ANC politicians to state officials and whistleblowers against graft. Activists have warned of the spread of assassinations as reprisals for probes into corruption and threats to patronage networks.

News - March 31, 2022 0
Morale among Russian troops fighting in Ukraine continues to suffer amid growing dissatisfaction across all ranks, the head of the British armed forces said,...

How tech layoffs are transforming the job market – GeekWire

News - August 16, 2021 0
Haiti updatesSign up to myFT Daily Digest to be the first to know about Haiti news. Tropical Storm Grace reached Haiti on Monday and was...

News - October 19, 2022 0
Nestlé increased its prices by 7.5 per cent in the first nine months of this year, the biggest amount in decades, enabling the world’s...
© 2022 Venture Current is a Flag Media LLC Publication. All Rights Reserved.
VC is part of the FLAG Token rewards network. Clients and partners can use FLAG Tokens for VC products and services.
VC runs 'Automatic' software. Stories posted here come from generic-topic Google news RSS feeds as well as client and partner-approved content.
If a story appears on this page that needs to be deleted due to licensing issues, please message us immediately so we can help you.