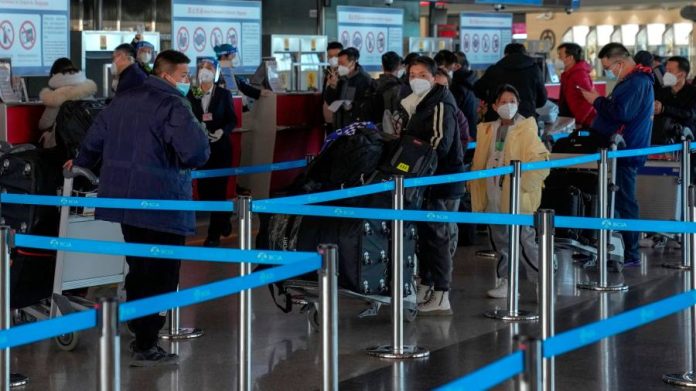 The EU is debating a bloc-wide response to the abrupt end of China’s zero-Covid containment policy, as capitals across the world seek to contend with surging infections in the country.

Giorgia Meloni, Italy’s new prime minister, called on Thursday for the EU to follow Rome’s move to test all air arrivals from China for coronavirus as member state officials met for urgent talks on a common approach.

Meloni said Italy’s mandatory testing, announced on Wednesday, would be “ineffective if it is not followed at a European level”. She added: “We wish Europe would move in this direction.”

The European Commission convened a meeting of the EU’s health and security committee, made up of member state officials, to “discuss the Covid-19 situation in China and possible measures to be taken in a co-ordinated way”.

“Co-ordination of national responses to serious cross-border threats to health is crucial,” the committee said after the meeting had concluded. “We need to act jointly and will continue our discussions.”

A huge increase in Covid cases in China and a rush of international travel bookings from the country has already prompted the US to demand negative test results for new arrivals from China in addition to the moves by Italy and other states. Japan, India and Taiwan have also imposed testing requirements for Chinese arrivals, in anticipation of a wave of visitors.

The sudden reimposition of such travel restrictions, lifted in western countries for most of the past year, is the latest repercussion of Beijing’s decision to scrap its draconian zero-Covid policies, which has sparked a coronavirus wave infecting tens of millions of people in China each day.

Equities fell in Asia and Europe on Thursday as investors worried about the surge’s impact on the global economy.

Italy, which said that 52 per cent of passengers on one post-Christmas flight from China to Milan had tested positive for coronavirus, has written to the commission in its push for a bloc-wide policy on Chinese arrivals. The EU’s free-travel Schengen zone means there are no restrictions on people moving around most of the continent.

Orazio Schillaci, the country’s health minister, said Italy would use genetic sequencing of positive test results to determine whether new variants were emerging in China. There are fears any new strain could pose a higher health threat than variants already in circulation for which vaccines in use in the west offer good protection.

Any EU decision would only be advisory for member state governments, although the health and security committee was critical in sharing information and agreeing joint approaches during the height of the pandemic in Europe.

After Thursday’s meeting, the French health ministry said it was seeking to act in a co-ordinated manner with its European counterparts. It added that the meeting underscored the need for a coherent EU strategy, as well as for more data and for further work on measures to protect people and keep travellers informed.

But it added that “at this stage, the number of Chinese travellers to Europe is limited and will remain so for several weeks, while China’s reopening measures are put in motion and take effect”.

Governments in the Nordic countries, Germany and the UK also said they had no current plans to follow Italy’s lead or were waiting for further information.

​​Norway and Finland are not considering imposing any conditions on arrivals from China because there is already a significant amount of Covid infections in the Scandinavian countries and few travellers from the Asian nation at this time of year, according to health authorities.

The German health ministry said it was “watching the situation closely and co-ordinating closely with our international partners.” Spokesperson Sebastian Gülde said: “Up till now the health ministry has no indication that any kind of worrying variant has emerged in the context of the outbreak in China, compared to the variants that are currently circulating in Germany.”

The British government also said it was reviewing whether to carry out Covid checks on arrivals from China, but has insisted there are “no plans” currently to reimpose controls at the border.

One government official said that Britain had already experienced the Omicron wave gripping China, adding: “Our vaccines work and our vaccination rate is superb.”

However the UK’s Health Security Agency is monitoring the prevalence and spread of harmful variants and Downing Street said all available international data would be kept under review.

Additional reporting by Giuliana Ricozzi in Rome, Richard Milne in Oslo and Guy Chazan in Berlin

News - January 27, 2022 0
Marcelo Claure, the SoftBank executive who led a turnround at struggling office sharing group WeWork, has become the most senior person yet to quit...

News - January 20, 2022 0
Vice President Harris promised that any further Russian violation of Ukraine’s territory would be met with “severe costs” during an interview on NBC’s “Today”...

News - November 4, 2022 0
Electric cars are to be subject to vehicle excise duty for the first time under measures to be introduced by Jeremy Hunt, the UK...

News - February 18, 2022 0
UK banks are enjoying an unusually hospitable environment. The housing market is red-hot, the Bank of England is imposing back-to-back rate rises and the...

Amazon to Introduce Venmo As a Checkout Option in 2022

News - November 10, 2021 0
© 2022 Venture Current is a Flag Media LLC Publication. All Rights Reserved.
VC is part of the FLAG Token rewards network. Clients and partners can use FLAG Tokens for VC products and services.
VC runs 'Automatic' software. Stories posted here come from generic-topic Google news RSS feeds as well as client and partner-approved content.
If a story appears on this page that needs to be deleted due to licensing issues, please message us immediately so we can help you.