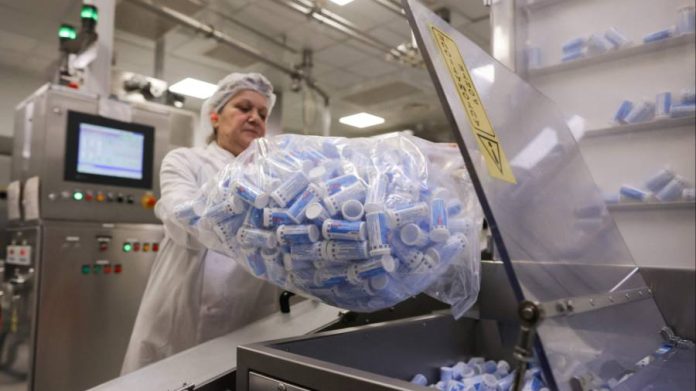 Brussels is seeking to end a Europe-wide medicine shortage by stockpiling drugs and obliging manufacturers to guarantee supplies.

The EU will also try to reduce reliance on China and increase domestic production capacity, the European Commission told the Financial Times.

A surge in winter sickness in the northern hemisphere and reduced exports from China have meant patients have found it difficult to get hold of some basic medicines such as penicillin and paracetamol. Almost all 27 EU member states and the UK have reported shortages.

Under pressure from governments, the commission has said it will intervene to ensure “strategic autonomy” in basic medicines through a “systemic industrial policy”.

It said it would soon propose legislation to “secure access to medicines for all patients in need and to avoid any market disruption of medicines”. The reform would require “stronger obligations for supply, earlier notification of shortages and withdrawals and enhanced transparency of stocks”, the commission said.

The move is the latest in a series of EU measures to reduce reliance on imports after the Covid-19 pandemic disrupted supply chains. The bloc has proposed huge subsidies for domestic silicon chip production and emergency export bans on strategically important products.

It is likely to be fiercely resisted by the pharmaceutical industry, which says governments should pay more for drugs and loosen labelling and market authorisation rules if they want to boost supply.

The commission said the shortages were not a temporary problem but “a systemic challenge with numerous vulnerabilities”, including overreliance on a few countries for certain products, and the way drugs are regulated and bought.

The EU’s Health Emergency and Response Authority (Hera), established in response to the Covid-19 pandemic, could organise joint procurements for several countries to improve supply.

Health commissioner Stella Kyriakides outlined the plan in a reply to Greek health minister Thanos Plevris, who had demanded action in a letter to her last week.

“There is a shortage in certain branded drugs containing paracetamol, antibiotics and inhalers . . . particularly for children,” Plevris said at a news conference last week where he announced a series of measures that would tackle the shortages.

The Greek moves include an export ban — something the EU is not considering for the moment. Many wholesalers buy drugs in Greece because it has low prices and then sell them on to other EU countries. Those companies now have to provide a list of inventory and stockpiled products.

Another Greek measure was to list alternatives to the drugs that are in short supply, a tactic also adopted by the UK and other countries.

Kyriakides said in a written statement that the commission was suspending some regulations and working with EU companies to increase capacity.

“Discussions with industry have already taken place and they are aware that they must rapidly step up production of these medicines,” she said.

Industry trade groups said the main cause was a surge in demand because of a high rate of respiratory conditions and infections, especially among children.

The Covid lockdown meant that many were not exposed to infections to build up immunity.

It called on governments to share more information about their disease forecasts and loosen trade restrictions to allow drugs and raw materials to move more freely to countries with shortages. They should also force wholesalers, pharmacies and hospitals to stop stockpiling antibiotics.

“The current policy models are not conducive to investment in sustainable production for the future,” it said.

The European Federation of Pharmaceutical Industries and Associations, another Brussels-based trade group, told the FT that China’s export operation was “gradually improving as the domestic supply situation is getting better”.

News - February 13, 2022 0
German chancellor Olaf Scholz is preparing to launch a last-ditch attempt to deter Vladimir Putin from invading Ukraine, after US officials warned that Russia...

Why Medtech Leaders Are Leaving Paper Where It Belongs: In the Past

News - October 8, 2022 0
“Digital transformation” corresponds with the missions of medical technology companies, but the “when and where” of implementation depend heavily on the expected efficiency gains...
© 2022 Venture Current is a Flag Media LLC Publication. All Rights Reserved.
VC is part of the FLAG Token rewards network. Clients and partners can use FLAG Tokens for VC products and services.
VC runs 'Automatic' software. Stories posted here come from generic-topic Google news RSS feeds as well as client and partner-approved content.
If a story appears on this page that needs to be deleted due to licensing issues, please message us immediately so we can help you.