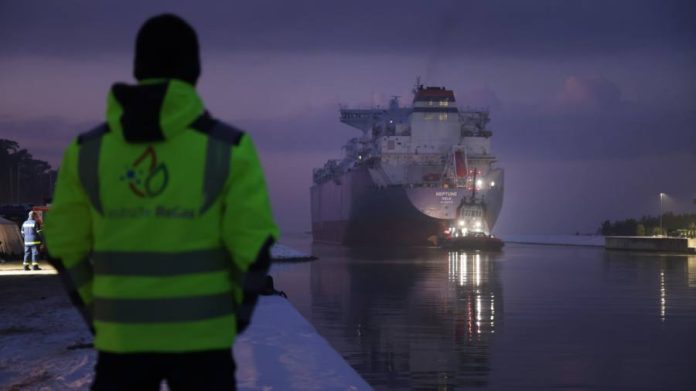 Europe was the largest customer in the global liquefied natural gas market in 2022, with the region importing substantially higher volumes than rival buyers as it seeks to replace dwindling Russian pipeline gas supplies.

In previous years, the EU lagged behind Japan and China on LNG imports, but Russia’s weaponisation of energy since its invasion of Ukraine has forced the bloc to seek alternative fuel supplies.

With Europe’s need to import greater volumes to fill up its storage facilities in 2023, the global LNG market is set to remain tight, potentially pushing up prices for gas users worldwide.

“When the price rises in Europe, Asia then has to [increase the amount it pays] accordingly, to be able to compete to attract LNG cargoes,” said Olumide Ajayi, senior LNG analyst at Refinitiv. “Europe has become the premium market.”

EU nations imported 101mn tonnes of LNG in 2022, 58 per cent more than the previous year, data from Refinitiv show. The bloc accounted for 24 per cent of global LNG imports during the period.

Europe’s quest was aided by a reduction in demand in China, said Namit Sharma, global co-leader of oil and gas at consultancy McKinsey. Beijing’s strict zero-Covid policy led to a deceleration in the economy and reduced demand for energy in 2022. “Had China purchased more LNG, it would have been difficult for Europe to actually source that gas,” Sharma said.

China’s LNG imports in 2022 totalled 64.5mn tonnes; in 2021 it was the largest importer globally with 79mn tonnes. The country also re-exported some excess LNG to Europe this year, helping to top up the bloc’s gas storage.

The EU’s LNG import last year is equivalent to 137bn cubic metres worth of natural gas, close to the approximately 140bn cm of pipeline gas it received from Russia in 2021. Analysts warn, however, that Europe will need to import more LNG in 2023, as it starts the year largely void of Russian pipeline gas, as Moscow moved to halt supplies.

Meanwhile, China has also dropped its zero-Covid rules, which analysts expect will lead to a revival of LNG demand — albeit not to the same level as 2021, as Beijing has deployed huge amounts of renewable energy and is building up its domestic gas supply.

LNG now makes up around 35 per cent of Europe’s gas supply, up from 20 per cent last year, according to data from think-tank Bruegel.

The International Energy Agency warned in December that the EU could face a potential gas supply-demand gap of 27bn cm in 2023 in a scenario where Russian pipeline gas deliveries drop to zero and China’s LNG imports rebound to 2021 levels.

Improvements in energy efficiency and a more rapid development of renewables would help to fill the gap, the IEA said. These shifts will be needed “to satisfy the conditions of refilling gas storage levels to 95 per cent and maintaining gas supply security through to the spring of 2024 without excessive strains on markets and European consumers”.

News - September 23, 2021 0
Mining updatesSign up to myFT Daily Digest to be the first to know about Mining news. Sir Mick Davis, the former head of mining group...

News - August 27, 2022 0
When Luba Lesiva created the Palantir Alumni syndicate on AngelList, she thought it would be a small project to help a handful of LPs...

News - September 1, 2022 0
U.S. stock futures were flat Thursday as investors await a key jobs report for August due Friday that will give more information about the...

News - April 20, 2022 0
Number of people fleeing Ukraine now exceeds 5 millionRussian ultimatum at Mariupol plant lapses, againUkrainians say 'battle for Donbas' is in full swingApril 20...
© 2022 Venture Current is a Flag Media LLC Publication. All Rights Reserved.
VC is part of the FLAG Token rewards network. Clients and partners can use FLAG Tokens for VC products and services.
VC runs 'Automatic' software. Stories posted here come from generic-topic Google news RSS feeds as well as client and partner-approved content.
If a story appears on this page that needs to be deleted due to licensing issues, please message us immediately so we can help you.