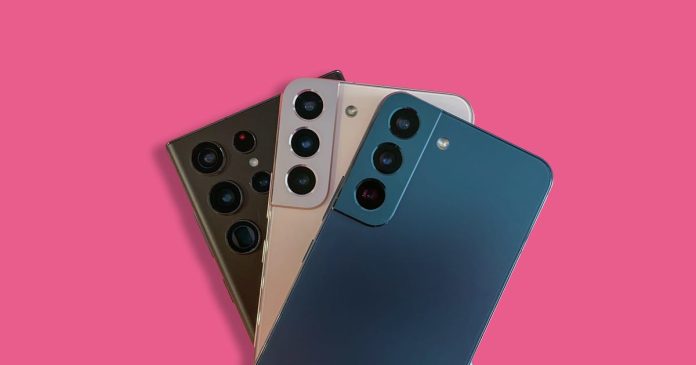 It’s almost February, which means it’s time to turn our attention to what’s next for Samsung. The company just announced its next Unpacked event will take place on Feb. 1, and the Galaxy S23 lineup is expected to be the star of the show.

The Samsung Galaxy S22 range includes some of our top phones from 2022. The base S22 impressed as a more affordable option, the S22 Plus is a superb all-rounder while the all-powerful S22 Ultra blew us away with its stellar camera skills. We even gave the Plus and Ultra CNET Editors’ Choice Awards.

If Samsung maintains the pattern it’s followed for the last three generations, we can expect to see a Galaxy S23, Galaxy S23 Plus and Galaxy S23 Ultra. We’ll likely know more on Feb. 1, but here’s what we’re expecting based on rumors, leaks and Samsung’s previous product launches. As for what we want to see from the Galaxy S23 lineup, longer battery life and more clever camera features are at the top of my list.

Samsung will likely announce the Galaxy S23 series during its next Unpacked event on Feb. 1, which will take place in San Francisco. The event announcement follows previous leaks, including this report from Korean newspaper JoongAng Daily, suggesting an early February launch for the Galaxy S23. A Jan. 6 tweet by prominent leaker Ice Universe also claimed to show a Galaxy Unpacked teaser image with a date of Feb. 1.

Whether the phones are available in stores to buy that month is another matter, as global supply chains are still struggling and it’s possible that there may be a longer delay than usual. But Samsung is already offering promotions for customers in the US who want to reserve a phone early. You’ll get $50 in Samsung credit if you sign up to reserve one device or $100 if you ask to reserve two.

We firmly expect Samsung to continue its strategy of launching multiple phone models, each with different specs and prices to appeal to a wide variety of people. Based on Samsung’s history, we’re confident we’ll see an entry level Galaxy S23 model, a step-up S23 Plus with a larger screen and the top-end S23 Ultra. It’s the Ultra that will pack the best tech, including extra cameras, the biggest display and almost certainly the S Pen stylus.

Samsung’s Unpacked event invitation also includes what appear to be three spotlights, which may be a subtle nod to three new incoming Galaxy models.

Reputable leaker Ice Universe posted a detailed rundown of the sizes of the three upcoming phones (via GSM Arena), which put them almost exactly in line with the current sizes of the S22 lineup. As such, we don’t expect any notable differences in screen sizes of any of the range over the predecessors.

Assuming Samsung launches multiple models, the S23 range will come at three main prices. We don’t expect Samsung to stray from last year’s prices. For reference, the base S22 launched with a price of $800, while the Plus model started at $1,000 and the high-performance S22 Ultra debuted at $1,200 in the US last February.

The cameras look like they might be one of the key areas of focus for the new series. That’s likely to be especially true for the Ultra model, which is usually where Samsung’s biggest camera innovations can be found.

We expected the S22 Ultra to include a whopping 200-megapixel image sensor, considering Samsung has launched two of these image sensors and they can be found in other phones. We didn’t see it on the S22 Ultra, but it seems likely that a 200-megapixel sensor will be one of the key bragging rights of the S23 Ultra. Ice Universe also predicts that the Galaxy S23 Ultra’s will have a 200-megapixel sensor. It remains to be seen whether it’s the HP1 or HP3 sensor the company already produces or a new variant built specifically for the phone.

Samsung’s product pages for these sensors boast improved resolution (obviously), but also improved low-light photography by combining sets of smaller pixels into larger individual ones that can capture more light. The S22 Ultra is already one of the best night-time camera phones, beating out the Pixel 7 Pro in our recent tests, so a further burst to its low-light prowess is exciting to hear.

That massive resolution will also help with the phone’s zoom skills, which are already impressive thanks to its 10x optical zoom lens. Recent rumors from Ice Universe suggest that the lens lineup will remain the same across all phones, but that extra resolution should help make zoom shots even more pin-sharp.

There’s a chance we might also see a slight change in the camera’s design, at least on the Galaxy S23 Plus and potentially the Galaxy S23. Rumors from reputable leakers Ice Universe and Steve Hemmerstoffer suggest that the new devices could have circular cutouts for the camera lenses that sit directly on the back of the device rather than on a camera module. The Galaxy S22 Ultra already has a camera like this, but Hemmerstoffer’s leak suggests this style could make its way to the Plus model as well.

The Galaxy S23 range will almost certainly use the latest Qualcomm Snapdragon 8 Gen 2 processor. In previous years, Samsung used its own Exynos chips for its European models. But a recent Qualcomm earnings call suggested that Samsung will in fact be using Qualcomm’s silicon for every phone in the range.

As for other specs, we expect a minimum of 8GB of RAM on the base models, with 12GB being available on the S23 Ultra. Storage is likely to continue to start at 128GB, with higher capacity options being available at higher prices. And no, we don’t expect a return of the microSD card slot to expand the storage. Sad face.

Recent Federal Communications Commission certifications show that the base S23 will have a 3,900-mAh battery, a step up from the 3,700 mAh of the base S23, while the S23 Plus will also get a battery boost to 4,700-mAh. There’s no official figure for the Ultra model yet, but again Ice Universe suggests that it will have the same 5,000-mAh cell size as the S22 Ultra.

We’ll likely know more as we progress through January and get toward that expected February launch date. But if the rumors turn out to be accurate, the Galaxy S23 lineup will probably be a modest step up from the Galaxy S22 family.

One Expert’s View on How AI Has Changed Cybersecurity

News - December 3, 2021 0
Google Photos’ Locked Folder feature, which promises to keep sensitive photos out of your main photo roll, is starting to roll out...

Venture capital will soon be brimming with ghosts • TechCrunch

News - October 29, 2022 0
Welcome to Startups Weekly, a nuanced take on this week’s startup news and trends by Senior Reporter and Equity co-host Natasha Mascarenhas. To get...

News - January 11, 2022 0
One of the most sought-after new products at Apple’s “Unleashed” event wasn’t the third-generation AirPods or the M1 Max new MacBook Pros, it was...

News - October 6, 2021 0
Canon has announced what’s easily the oddest glass yet for its EOS R mirrorless camera system: a dual 5.2mm f/2.8 fisheye. The...
© 2022 Venture Current is a Flag Media LLC Publication. All Rights Reserved.
VC is part of the FLAG Token rewards network. Clients and partners can use FLAG Tokens for VC products and services.
VC runs 'Automatic' software. Stories posted here come from generic-topic Google news RSS feeds as well as client and partner-approved content.
If a story appears on this page that needs to be deleted due to licensing issues, please message us immediately so we can help you.