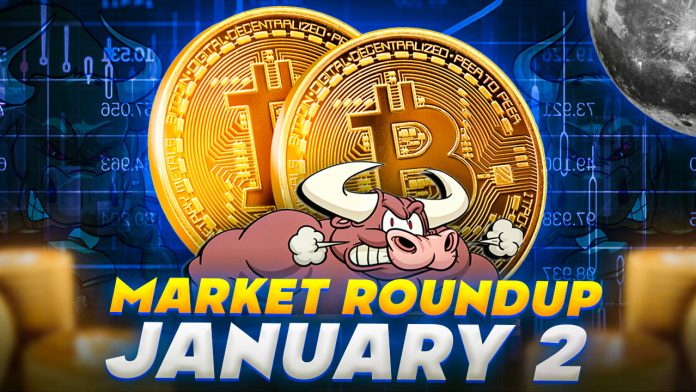 BTC traded bullishly on January 2nd, after breaching the sideways trading range of $16,500 to $16,650. As a result, the Bitcoin price prediction remains bullish, and a break of the $16,770 resistance level may lead BTC to $16,930. Major cryptocurrencies were trading in the red early on January 2 as the global crypto market cap increased by 0.07% to $795.38 billion on the previous day.

Bitcoin Miner Income is Down 37.5%

Not only did miners face a lackluster market, but they were also hit with skyrocketing electricity prices and unprecedented levels of mining difficulty. Income from bitcoin mining dropped from $15.3 billion in 2021 to $9.55 billion in 2022, a decrease of 37.5%.

After reaching an all-time high in 2021, the market cap of cryptocurrencies has since dropped by over $2 trillion to under $900 billion. Bitcoin, the largest digital asset, has fallen in value by more than 70% since its all-time high of about $69,000 in November.

Also, the past year has been marked by a number of high-profile business and project failures that have sent shockwaves throughout the industry. When terraUSD went under in May, it triggered a chain reaction that ultimately dragged down other companies, such as the cryptocurrency-focused hedge fund Three Arrows Capital.

Then in November, one of the largest cryptocurrency exchanges, FTX, went bankrupt, sending shockwaves across the market. Stocks and cryptocurrencies, known as “risk assets,” have come under pressure from rising interest rates and individual crypto-specific failures. Investors’ wariness of risky assets impacted miners as well, worsening market conditions.

In addition to the state of the market, miners had to contend with soaring electricity prices and an all-time high in mining difficulty. As the hash rate increased, mining difficulty skyrocketed in 2022, making it difficult for some miners to turn a profit. As a result, the miner’s daily revenue plummeted from $63.548 million on November 10, 2021, to just $16.173 million by the end of the year.

The current bitcoin price is $16,735, with a trading volume of $11.5 billion in the last 24 hours. On the technical front, Bitcoin is facing strong resistance at $16,660, and a bullish breakout of this level could influence future market patterns.

BTC’s immediate resistance stands at $16,750, and a bullish breakthrough above this level might send BTC to $16,950.

The RSI and MACD indicators have entered the buying zone, signaling the possibility of a pullback, but the 50-day moving average is acting as a key hurdle.

Given the market’s fear of loss, investors are seeking safer, higher-yielding alternatives. The market’s largest pre-sales are available to early investors.

The FightOut (FGHT) platform works similarly to a personal trainer, except that the FGHT token is rewarded proactively for workout time. All activities are recorded and can be used to improve the statistics of one’s metaverse avatar. Earning FGHT tokens gives users with an added motivation to live a healthy lifestyle and exercise while reaping the benefits of blockchain technology.

Despite the general lack of liquidity in the bitcoin market, FightOut has thrived and attracted investors. Through its token sale, which began last week, it has already raised more than $2.5 million. As the sale progresses, the current selling price of 60.06 FGHT for $1 (FGHT can be purchased using ETH or USDT) will grow.

When it launches in early 2023, Dash 2 Trade will be an Ethereum-based platform that will deliver real-time analytics and social trading data. Trading signals, on-chain analytics, strategy-building tools, and newsfeeds will be among the initial features, supporting both rookie and expert traders in staying abreast of the turbulent bitcoin market.

Dash 2 Trade, one of the most important ICOs of 2022, has launched its dashboard beta with only 4 days left in the presale. So far, D2T has raised around $12.3 million in venture funding. D2T is the system’s access coin, and it is now worth $0.0533 in the presale after previously selling for $0.0476 to investors.

C+Charge (CCHG) is a Binance Chain-based peer-to-peer payment system for electric vehicle (EV) charging stations. It intends to expand customer access to carbon credits by rewarding individuals who charge their electric vehicles at its terminals, which will go live in the second quarter of next year.

To demonstrate its scalability, the platform has already agreed to add 20% of Turkey’s EV chargers to its network. 1 CCHG costs $0.013, and it can be purchased with BNB or USDT. So far, the initiative has raised more than $62,000 in pre-sale funds.

News - January 7, 2022 0
What do you expect to get when a joke-narrating robot and a robotics engineer go into a bar? Live comedy is what you get....

News - February 20, 2022 0
Strolling along Sixth Avenue the other day, I noticed something unsettling. No, not some homeless guy using a sidewalk as a bathroom. That’s one...
© 2022 Venture Current is a Flag Media LLC Publication. All Rights Reserved.
VC is part of the FLAG Token rewards network. Clients and partners can use FLAG Tokens for VC products and services.
VC runs 'Automatic' software. Stories posted here come from generic-topic Google news RSS feeds as well as client and partner-approved content.
If a story appears on this page that needs to be deleted due to licensing issues, please message us immediately so we can help you.