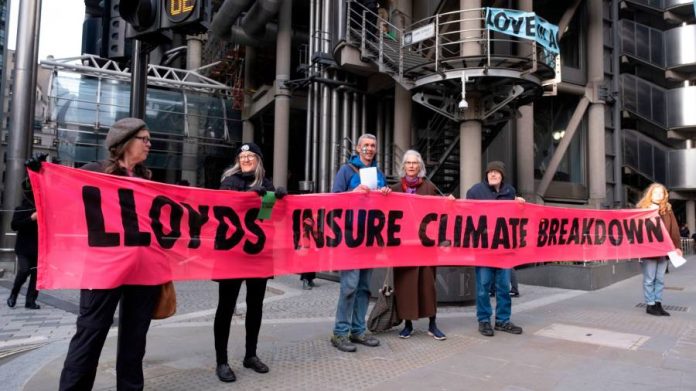 Extinction Rebellion, the environmental group that has targeted the City of London, announced on Sunday it would suspend acts of public disruption in the UK and focus instead on mass demonstrations.

The British arm of the organisation said it wanted to bring more people on board to counter climate change and was hoping that 100,000 would attend a protest at Westminster in April.

Established in 2018, the grassroots group has previously closed roads and bridges in central London, blockaded oil refineries, smashed windows at the headquarters of Barclays bank and sprayed fake blood over the Treasury.

In April Lloyd’s of London, the world’s largest insurance marketplace, was forced to shut its headquarters and shift to remote trading after a group of climate activists barricaded one of the City’s best-known buildings.

Extinction Rebellion, also known as XR, said it was the first time it had compelled a financial institution to close its doors. The group targets banks for financing the fossil fuel industry.

In a statement entitled “We quit”, Extinction Rebellion UK said that in the four years it has been taking direct action, very little had changed, with greenhouse gas emissions continuing to rise.

“As we ring in the new year, we make a controversial resolution to temporarily shift away from public disruption as a primary tactic,” it said.

Boris Johnson, former UK prime minister, introduced legislation that would allow sentences of up to 12 months in prison for those who “interfere with key national infrastructure” such as airports or printing presses.

A new public order bill being scrutinised in the House of Lords targets protesters from groups such as Extinction Rebellion. It creates new criminal offences of “locking on” or “going equipped to lock on”, to prevent people from fixing themselves to building sites or transport systems to cause disruption.

This will carry a maximum penalty of six months’ imprisonment or an unlimited fine. It will also become illegal to obstruct major transport works such as the High Speed 2 rail link from London to northern England.

Extinction Rebellion said it planned to surround the Houses of Parliament with 100,000 people from April 21.

“This year, we prioritise attendance over arrest and relationships over roadblocks, as we stand together and become impossible to ignore,” it said in its statement.

“We must be radical in our response to this crisis and determined in our efforts to address the climate and ecological emergency, even if it means taking a different approach than before. In a time when speaking out and taking action are criminalised, building collective power, strengthening in number and thriving through bridge-building is a radical act.”

Coronavirus latest: Americans sign up for healthcare as deadline looms

News - August 15, 2021 0
Ajinomoto, the 112-year-old Japanese food maker most famous for its monosodium glutamate seasoning, has emerged as a surprising beneficiary of the upheaval caused by...

News - December 28, 2021 0
Monetary policy in China is set to ease as the government continues to focus on stability and the theme of "common prosperity," veteran investment...
© 2022 Venture Current is a Flag Media LLC Publication. All Rights Reserved.
VC is part of the FLAG Token rewards network. Clients and partners can use FLAG Tokens for VC products and services.
VC runs 'Automatic' software. Stories posted here come from generic-topic Google news RSS feeds as well as client and partner-approved content.
If a story appears on this page that needs to be deleted due to licensing issues, please message us immediately so we can help you.