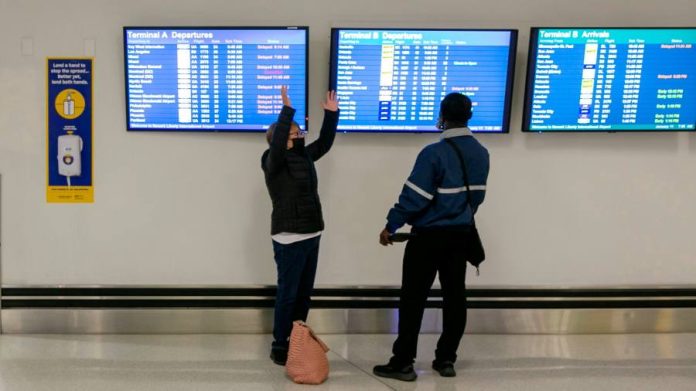 The US aviation regulator lifted its order for a total halt to all domestic departures put in place for two hours following the failure earlier on Wednesday morning of a key flight safety system.

More than 700 flights to or from US airports had been cancelled and more than 4,000 had been delayed by 9am eastern time, about two hours after the Federal Aviation Administration ordered the halt, according to data from FlightAware, a flight tracking website.

The FAA ordered the rare shutdown of domestic air traffic after a failure of the so-called Notice to Air Missions system, which provides real-time information about potential hazards to pilots and crew members.

Although the FAA was still hunting for the initial cause of the failure, it said in a tweet just before 9am that it was resuming normal flight schedules.

“Normal air traffic operations are resuming gradually across the US following an overnight outage to the Notice to Air Missions system that provides safety info to flight crews,” the FAA wrote. “The ground stop has been lifted. We continue to look into the cause of the initial problem.”

The agency ordered the rare “ground stop” just after 7am ET for two hours as it struggled to restore the critical safety system. It stressed that flights in the air were safe to land, however.

A widespread ban on all flight departures is highly unusual. The longest previous example followed the September 11 2001 terror attacks, in which aircraft were used to destroy New York City’s World Trade Center.

The problems come less than a month after bad weather triggered mass disruption and thousands of flight cancellations.

The White House stressed that, while it was unclear what had caused the issue, there was so far no reason to suspect it was the result of a cyber attack.

“There is no evidence of a cyber attack at this point,” White House press secretary Karine Jean-Pierre wrote on Twitter.

Update 4: The FAA is making progress in restoring its Notice to Air Missions system following an overnight outage. Departures are resuming at @EWRairport and @ATLairport due to air traffic congestion in those areas. We expect departures to resume at other airports at 9 a.m. ET.

US transportation secretary Pete Buttigieg said he had been “in touch” with the FAA about the system outage.

“FAA is working to resolve this issue swiftly and safely so that air traffic can resume normal operations, and will continue to provide updates,” Buttigieg wrote on Twitter.

US president Joe Biden told reporters at the White House on Wednesday morning that he had spoken with Buttigieg.

“They don’t know what the cause is,” Biden said. “Aircraft can still land safely, just not take off right now.”

Biden, who was accompanying his wife to a medical procedure on Wednesday morning, said he expected to have a “good sense” of what caused the disruption “in a couple of hours”.

At 6.27am ET, United Airlines announced a “ground stop” for all flights until 10am ET.

United wrote on Twitter that it had “temporarily” delayed all domestic flights and would issue an update when it heard more from the FAA.

Departure boards showed that just three of the 20 flights scheduled to leave New York City’s JFK airport between 5.40am and 6.10am managed to take off.

Overall, nearly 21,500 flights were due to depart from US airports on Wednesday, according to aviation data company Cirium.

News - July 4, 2022 0
Police say a gunman who killed three people when he opened fire in a crowded shopping mall acted alone and apparently selected his victims...

News - May 9, 2022 0
Federal Reserve policymaker Neel Kashkari said Monday that he is confident the central bank will get inflation under control. However, he thinks the...

News - January 16, 2023 0
Chinese ride-hailing group Didi has been given permission to sign up new customers after an investigation into the company forced its apps offline, showing...

The stock market appears to be starting to believe the Fed might pull off...

News - March 26, 2022 0
The S&P 500 is up almost 10% from its recent low from the days before the Fed lifted rates a quarter-percent on March 16. Source
© 2022 Venture Current is a Flag Media LLC Publication. All Rights Reserved.
VC is part of the FLAG Token rewards network. Clients and partners can use FLAG Tokens for VC products and services.
VC runs 'Automatic' software. Stories posted here come from generic-topic Google news RSS feeds as well as client and partner-approved content.
If a story appears on this page that needs to be deleted due to licensing issues, please message us immediately so we can help you.