When the Kansas City branch of the Federal Reserve announced in May that its annual gathering of central bankers would be held as an in-person event against the dramatic backdrop of the Rocky Mountains, it marked a milestone in the US recovery from the depths of the pandemic.

At the time, Covid-19 case counts in the US had plummeted as a nationwide vaccination campaign accelerated, major cities around the country opened back up and Americans flocked to spend savings accumulated during the pandemic on dining out and travelling.

As a speedy return to normal life came tantalisingly into view, economic activity hummed in a way it had not for more than a year. Job gains and inflationary pressures were building at a speed that prompted the first of what would later become a chorus of calls for the US central bank to begin assessing when and how it should scale back many of the emergency stimulus measures it rolled out last year.

But the Kansas City Fed’s abrupt decision last week to move the Jackson Hole symposium, which is held every August, to a virtual format for the second time in its more than four-decade history underscored the enormity of the risks still confronting the recovery as the more contagious Delta variant spreads.

The U-turn also accentuated the high-stakes balancing act the Fed must perform as it charts its first policy pivot following a period of extraordinary monetary support, casting an even bigger spotlight on remarks from chair Jay Powell that are scheduled for Friday.

“They just face big, unavoidable uncertainty,” said Bill English, a Yale professor and former director of the Fed’s division of monetary affairs. “We don’t know what a recovery from a global pandemic looks like, how long it takes, and the longer-term structural shifts that come out of that.”

A robust economy with precariously high inflation that necessitates a hastier tightening of monetary policy was just as possible a year from now as a recovery that was “partial, incomplete and slow”, English said.

Officials at the central bank are engaged in an extensive debate about the fate of the $120bn monthly asset purchase programme unveiled at the onset of the pandemic. The Fed has said it will buy bonds at the same rate until it sees “substantial further progress” on its dual goals of average 2 per cent inflation and maximum employment.

A growing cohort of central bankers have made the case that the inflation target has already been met and that the Fed should consider a more immediate reduction or “tapering” of its bond-buying programme. A choppier labour market recovery marred by worker shortages has unnerved other officials, meaning that Powell’s speech will be carefully dissected for any hints on the potential timing of a pullback.

“It is the one of the seminal moments each year where everybody is watching,” said Mark Spindel, chief investment officer at Potomac River Capital, a Washington-based investment firm. “There are no immaculate tightenings and now that they’ve admitted they are talking about tapering, they should refine that talk and give us some insight on what they are going to do.”

Powell said last week that it was “not yet clear” whether the recent resurgence in Covid cases would significantly affect the economic trajectory. But in a sign of how Delta has rattled even the most strongly held convictions, one of the most ardent supporters of a more aggressive tapering timeline, Robert Kaplan of the Dallas Fed, recently acknowledged the possibility that an adjustment may need to be delayed.

Brian Sack, director of global economics for the DE Shaw group, said he expected the Fed to signal in September its intentions to announce tapering at the November policy meeting, a sequence also predicted by Guido Persichetti, co-head of global Treasuries trading at Barclays. The actual taper would probably start in January, Persichetti added.

As the Fed grapples with the tricky task of dialling back its stimulus, policymakers also face mounting questions about whether it can foster a more equitable recovery.

Despite the sharp drop in the unemployment rate last month to 5.4 per cent, there are nearly 6m more out of work than there were in February 2020. Low-income workers have suffered disproportionately during the pandemic, with racial minorities bearing an even larger bulk of the burden.

The Fed’s new framework unveiled at last year’s virtual gathering represented a decisive step towards achieving maximum employment, with the central bank committing to tolerate higher periods of inflation to make up for past periods when it undershot its 2 per cent target.

“Traditionally, monetary policymakers have erred on the side of a low-pressure economy because risks of inflation have dominated decisions,” said Karen Dynan, an economics professor at Harvard university, who previously worked at the Treasury department and the Federal Reserve.

“One of the lessons of the late 2010s was that running a high-pressure economy really benefited those at the bottom of the wage distribution . . . the new framework was really a decision to err on [that] side.”

How this new framework works in practice has not yet been tested, however, injecting another source of uncertainty into the outlook just as consumer prices have soared.

“The Fed has indicated that they will wait until inflation is a clear and present danger and will not move as pre-emptively as they have historically,” said Roger Ferguson, former vice chair of the Fed. “Ultimately, they are going to have to risk falling behind the curve, which may call for a more rapid pace of rate increases once they start.”

For Jean Boivin, former deputy governor of the Bank of Canada, the huge monetary and fiscal response to the Covid crisis presents yet another set of pressing problems that policymakers have not fully grappled with. 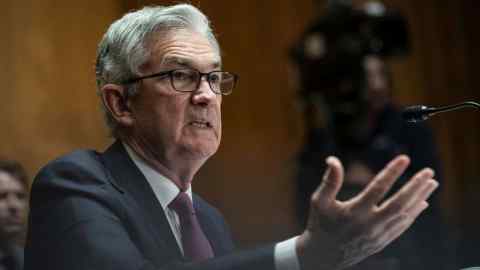 One of the big unresolved questions is the extent to which monetary policy can be tightened in the long run given current debt levels, which have soared to new heights following an unprecedented injection of more than $5tn in government stimulus over the past year. A rise in US borrowing costs that could accompany an attempt to normalise policy in the face of higher inflation was not a “trivial” matter against this backdrop, Boivin warned.

Financial stability risks were also paramount, he added, made all the more acute by booming asset prices across a broad swath of markets.

“The taper discussion completely pales in comparison to a discussion of much bigger issues that we’ve been facing for [the past 18 months] and will be for the next couple of years in light of what we are calling a ‘policy revolution’,” said Boivin, now head of the BlackRock Investment Institute.

Trafigura’s shareholders and top traders to split $1.7bn in payouts

News - August 30, 2022 0
China is the only major global economy sticking to a zero-Covid policy, and lockdowns, travel restrictions and mass testing have disrupted businesses and cooled...

News - August 27, 2022 0
A larger “sacrifice” will be needed to tame inflation than in previous bouts of monetary policy tightening, according to European Central Bank officials who...

News - May 23, 2022 0
Stocks started up Monday as Wall Street attempts to reverse several straight weeks of losses. Source
© 2022 Venture Current is a Flag Media LLC Publication. All Rights Reserved.
VC is part of the FLAG Token rewards network. Clients and partners can use FLAG Tokens for VC products and services.
VC runs 'Automatic' software. Stories posted here come from generic-topic Google news RSS feeds as well as client and partner-approved content.
If a story appears on this page that needs to be deleted due to licensing issues, please message us immediately so we can help you.