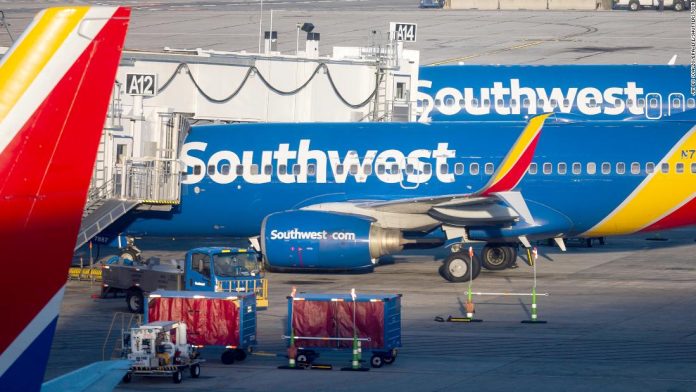 (CNN) — Federal officials say they are acting on “thousands” of complaints by Southwest Airlines customers after its days-long holiday travel meltdown — including complaints that Southwest is not making good on its pledge to issue refunds.

The Department of Transportation “has sent every complaint directly to Southwest” and is now demanding the airline “provide substantive responses” to each within 60 days.

“Since the Southwest meltdown, DOT has received thousands of consumer complaints about Southwest — including complaints about lack of ticket refunds and reimbursements for services when a traveler was stranded,” the Department of Transportation said in a statement provided first to CNN.

Southwest Airlines says it canceled more than 16,000 flights between December 21 and December 31, noting in a financial filing that the cascading logistical failures cost the airline between $725 million and $825 million in lost revenue, additional crew costs, and passenger refunds.

The Department of Transportation has required Southwest to honor passenger refund requests “within 7 business days if the traveler paid for the ticket by card and 20 days if they paid by cash or check,” if Southwest canceled or significantly delayed a flight, “regardless of the reason.”

Southwest customers should first file their refund request with Southwest through its website, the DOT advises. If they are not getting refunds, they should then file a complaint with DOT.

This announcement comes after Transportation Secretary Pete Buttigieg told Southwest leaders on December 29 that the agency will “use the fullest extent of its investigative and enforcement powers to hold Southwest accountable if it fails to adhere to the promises made to reimburse passengers.”

Toshiba agrees ceasefire with investors but fight is far from over

News - June 1, 2022 0
For four years, Toshiba has been at war with its investors in an acrimonious conflict that has smashed the decades-old conventions of corporate Japan.But...

News - November 1, 2022 0
Migrants picked up while attempting to cross the English Channel from France are bused to a processing centre. LONDON: A British cabinet minister on Tuesday...

From Pakistan earthquake to malaria vaccine: 5 overnight developments from around the globe

News - October 7, 2021 0
Here is a round-up of the top developments around the world today. 1. At least 20 killed in earthquake in southern Pakistan At least 20 people...

Silent Hill: The Short Message rated for PS5 in Taiwan

News - December 30, 2022 0
The Taiwan Digital Game Rating Committee has rated Silent Hill: The Short Message for PlayStation 5. Silent Hill: The Short Message was first rated...
© 2022 Venture Current is a Flag Media LLC Publication. All Rights Reserved.
VC is part of the FLAG Token rewards network. Clients and partners can use FLAG Tokens for VC products and services.
VC runs 'Automatic' software. Stories posted here come from generic-topic Google news RSS feeds as well as client and partner-approved content.
If a story appears on this page that needs to be deleted due to licensing issues, please message us immediately so we can help you.