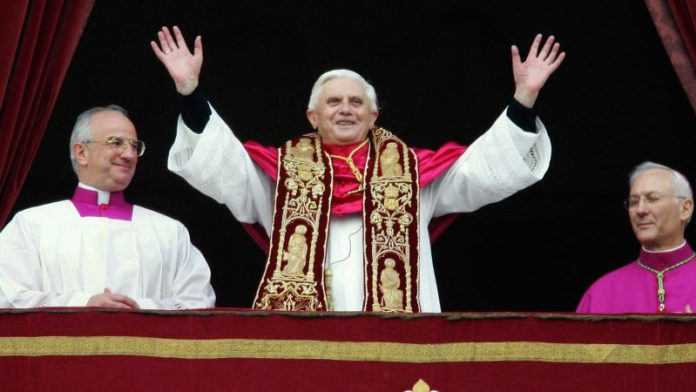 Dignitaries and religious leaders have been paying tribute to Pope Emeritus Benedict XVI, who died Saturday in a monastery in the Vatican at the age of 95.

Benedict, who was the first pontiff in almost 600 years to resign his position, rather than hold office for life, passed away on Saturday, according to a statement from the Vatican.

“With sorrow I inform you that the Pope Emeritus, Benedict XVI, passed away today at 9:34 in the Mater Ecclesiae Monastery in the Vatican,” the Director of the Press Office of the Holy See, Matteo Bruni said.

The funeral of Pope Emeritus Benedict XVI will be held on Thursday in St. Peter’s Square in the Vatican City at 9:30 a.m. local time, Bruni said. The funeral will be led by Pope Francis.

The former pope’s body will lie in state in St. Peter’s Basilica in the Vatican from Monday for the faithful to bid farewell, Vatican News reported Saturday. As per the wish of Pope Emeritus, his funeral will be “simple,” Bruni said.

News of his death came days after Pope Francis asked the faithful to pray for Benedict, saying he was “very sick.”

“I want to ask you all for a special prayer for Pope Emeritus Benedict who sustains the Church in his silence. He is very sick. We ask the Lord to console and sustain him in this witness of love for the Church to the very end,” Francis said at his general audience on Wednesday.

His health had been in decline for some time.

Benedict stunned the Catholic faithful and religious experts around the world on February 11, 2013, when he announced plans to step down from his position as Pope, citing his “advanced age.”

In his farewell address, the outgoing pope promised to stay “hidden” from the world, but he continued to speak out on religious matters in the years following his retirement, contributing to tensions within the Catholic Church.

Benedict was a powerful force in the Catholic Church for decades. Born Joseph Ratzinger in Germany in 1927, he was the son of a policeman. He was ordained as a priest in 1951, made a cardinal in 1977, and later served as chief theological adviser to Pope John Paul II.

One of his most significant steps up came in 1981 when he took over as head of the Congregation for the Doctrine of Faith, the Vatican office that oversees “the doctrine on the faith and morals throughout the Catholic world,” according to the Vatican.

Ratzinger became known as “Cardinal No” stemming from his efforts to crack down on the liberation theology movement, religious pluralism, challenges to traditional teachings on issues such as homosexuality, and calls to ordain women as priests.

He was known to be more conservative than his successor, Pope Francis, who has made moves to soften the Vatican’s position on abortion and homosexuality, as well as doing more to deal with the sexual abuse crisis that has engulfed the church in recent years and clouded Benedict’s legacy.

In April 2019, Benedict discussed the sex abuse crisis in a public letter, claiming that it was caused in part by the sexual revolution of the 1960s and the liberalization of the church’s moral teachings.

In January 2020, Benedict was forced to distance himself from a book widely seen as undercutting Francis as he considered whether or not to allow married men to become priests in certain cases. The book, “From the Depths of Our Hearts,” argued in favor of the centuries-old tradition of priestly celibacy within the Catholic Church. Benedict was originally listed as co-author, but later clarified that he had only contributed one section of the text.

A year later, Benedict came under fire over his time as archbishop of Munich and Freising, between 1977 and 1982, following the publication of a Church-commissioned report into abuse by Catholic clergy there.

The report found that while in the post he had been informed of four cases of sexual abuse involving minors – including two that had occurred during his time in office – but failed to act. It also revealed Benedict had attended a meeting about an abuser identified as Priest X. Following the report’s publication, Benedict pushed back against accusations that he knew in 1980 that this priest was an abuser.

In a letter released by the Vatican amid the furor, Benedict wrote that he was “of good cheer” as he faced “the final judge of my life,” despite his shortcomings. He also issued a general apology to survivors of abuse.

Global leaders paid homage to the former pope, following his death. Justin Welby, the Archbishop of Canterbury and head of the Church of England, said he is “mourning” the former pope.

“Pope Benedict was one of the greatest theologians of his age – committed to the faith of the Church and stalwart in its defence,” Welby said in a statement Saturday.

“In all things, not least in his writing and his preaching, he looked to Jesus Christ, the image of the invisible God. It was abundantly clear that Christ was the root of his thought and the basis of his prayer.

“In 2013 Pope Benedict took the courageous and humble step to resign the papacy, the first Pope to do so since the fifteenth century. In making this choice freely he acknowledged the human frailty that affects us all,” he added.

“Europe mourns him. May he rest in peace.”

“He was a great theologian whose UK visit in 2010 was an historic moment for both Catholics and non-Catholics throughout our country.

“My thoughts are with Catholic people in the UK and around the world today,” Sunak added.

Italy’s new Prime Minister Giorgia Meloni voiced her admiration for the former pope. “Benedict XVI was a giant of faith and reason. He put his life at the service of the universal Church and spoke, and will continue to speak, to the hearts and minds of men with the spiritual, cultural and intellectual depth of his Magisterium,” she tweeted Saturday.

“Pope Benedict’s passing saddens me. My sympathy goes out to all Catholics,” von der Leyen said in a tweet, adding, “He had set a strong signal through his resignation. He saw himself first as a servant for God and his Church.”

News - June 22, 2022 0
Following a series of protests by local Muslim women, the city had passed an edict in May 2021 allowing bathers at public pools in...

News - July 5, 2022 0
Maryna Viazovska is the second woman to win the prize for mathematics in its 86 year history. Source

News - December 17, 2021 0
A group of EU leaders have demanded that Brussels intervene to help curb the record price of CO2, arguing that potential market manipulation is...

News - August 17, 2022 0
The UK’s rate of inflation jumped to 10.1 per cent in July, the first time it has registered a double-digit annual increase in more...
© 2022 Venture Current is a Flag Media LLC Publication. All Rights Reserved.
VC is part of the FLAG Token rewards network. Clients and partners can use FLAG Tokens for VC products and services.
VC runs 'Automatic' software. Stories posted here come from generic-topic Google news RSS feeds as well as client and partner-approved content.
If a story appears on this page that needs to be deleted due to licensing issues, please message us immediately so we can help you.