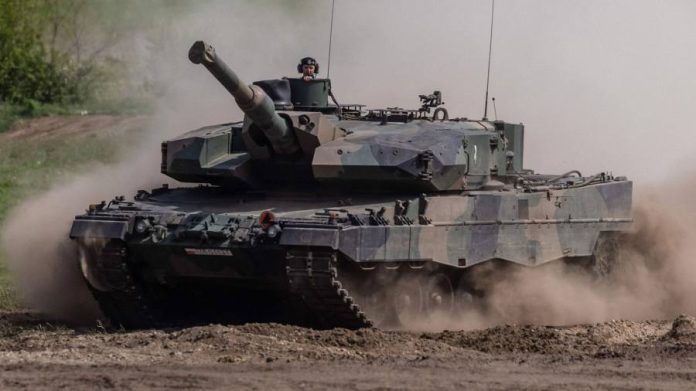 Germany is to send Leopard 2 tanks to Ukraine, in a move that marks a significant breakthrough in western efforts to bolster Kyiv’s fight against the Russian army.

A person familiar with the matter confirmed that Germany would send the tanks, though he would not provide details as to how many and what type are under consideration.

A report in the German news outlet Spiegel Online, which first reported the German move, said Berlin would send at least a company of Leopard 2A6s – typically around 14 tanks. It said they would come from the stocks of the Bundeswehr, the German army.

Berlin is also to give the green light to Poland’s request to send some of its own Leopards to Ukraine, according to officials.

The decision to send tanks marks a U-turn for German chancellor Olaf Scholz, who had long hesitated to provide Ukraine with heavy armour, fearing it would increase the risk of a direct confrontation between Russia and Nato.

He has also stressed that Germany would never go it alone when it came to tanks and insisted that it would only act in lockstep with its allies, principally the US.

Relations between Berlin and Washington were strained last week after a number of media outlets reported Scholz as saying Germany would not send tanks to Ukraine unless the US did the same. German officials later denied there was any such “linkage”.

However, recent developments suggest that after days of intense consultation, the US and Germany have agreed to act in concert on tanks. That would mirror a similar move by the two countries in early January, when they jointly announced they would both be providing infantry fighting vehicles to Ukraine – US-made Bradleys and German Marders.

On Tuesday, two US officials said America was actively considering sending its own Abrams tanks to Ukraine, after previously being sceptical about such a move because of the challenges involved from a logistical and training point of view. The Biden administration has been facing growing pressure from both Democrats and Republicans on Capitol Hill to send the Abrams in an effort to break Germany’s resistance to sending its own tanks. The White House and the Pentagon declined to comment.

The pressure on Scholz to rethink his position on tanks has been intensifying over the past few weeks but reached a crescendo last Friday after a meeting of western defence officials at the US Ramstein airbase in western Germany which was called to step up military aid to Ukraine.

Germany had been expected to announce at Ramstein that it would send tanks to Kyiv — or at least allow others to do so. Scholz has the power to grant or withhold permission for the 13 nations across Europe that use the Leopard 2 to re-export them to Ukraine. However, the meeting failed to deliver a breakthrough.

Scholz then endured a barrage of criticism from Germany’s allies, particularly in eastern Europe and the Baltic, who urged him to show leadership on the issue. His coalition partners, the Greens and liberals, also lambasted him for failing to accede to Ukraine’s demands.

“I hope that the answer from the Germans will come quickly this time. They are procrastinating, acting in a way that is difficult to understand,” Poland’s prime minister Mateusz Morawiecki said earlier on Tuesday.

Russia warned of unspecified consequences in response to any potential move on tanks. “Relations are already at a pretty low point and there is no sign of any substantive dialogue with Germany and the other countries of the EU and Nato,” Dmitry Peskov, President Vladimir Putin’s spokesman, said on Tuesday, according to Interfax.

“These supplies don’t mean anything good for the future of the relationship. They will definitely leave an inevitable mark,” added Peskov.

Separately, Valery Gerasimov, Russia’s chief of the general staff, indicated that rising tensions with the west over Ukraine would have consequences beyond the conflict.

Gerasimov, appointed commander of Russia’s invasion force as part of a reshuffle this month, said Moscow had decided to carry out a far-reaching reform and expansion of its military in response to Finland and Sweden’s plans to join Nato, as well as what he called the “hybrid war” in Ukraine.

News - September 19, 2022 0
The supply chain crisis and an extinct volcano are spurring a new beer shortage."We've been running delivery to delivery for the past few weeks,...

Putin, Ukraine and the revival of the west

News - April 15, 2022 0
Two photos taken during the Ukraine crisis seem to sum up the relative positions of Russia and the western alliance. The first is of...

US third quarter GDP revised up to 3.2 pct

US college football: big money game is now beyond a jock

News - December 4, 2022 0
In 2035 or so, an economist may win a Nobel Prize for showing that post-pandemic inflation did not come from supply bottlenecks or stimulus...

News - April 13, 2022 0
GlaxoSmithKline has reached an agreement to buy blood cancer specialist Sierra Oncology for £1.5bn as part of plans to strengthen its drug pipeline after...
© 2022 Venture Current is a Flag Media LLC Publication. All Rights Reserved.
VC is part of the FLAG Token rewards network. Clients and partners can use FLAG Tokens for VC products and services.
VC runs 'Automatic' software. Stories posted here come from generic-topic Google news RSS feeds as well as client and partner-approved content.
If a story appears on this page that needs to be deleted due to licensing issues, please message us immediately so we can help you.