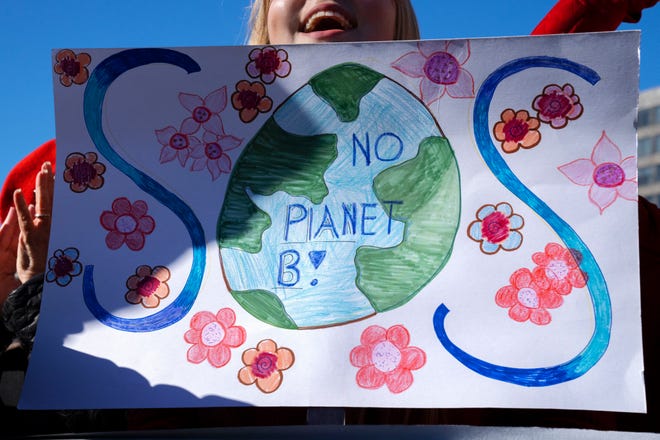 There was a time – a recent time – when concern about the environment was relatively bipartisan, not a cultural flashpoint.

A Republican, President Richard Nixon, established the Environmental Protection Agency in 1970. In the 1980s and 1990s, bipartisan majorities voted to strengthen the Clean Air Act and the Clean Water Act, led by a Republican – Rhode Island’s Sen. John Chafee.

Those days are gone and today a wide range of misleading statements and outright lies about the reality of human-caused climate change circulate widely.

The sheer volume of misinformation can distort perceptions of how many people don’t believe the science that shows the earth’s climate is changing because of human activity, said Katharine Hayhoe, an atmospheric scientist and professor at Texas Tech University.

“I call them ‘zombie arguments’ because you can explain that they’re not true but they still go stumbling around because they’re not about facts but excuses,” she said.

How does climate change affect you?: Subscribe to the weekly Climate Point newsletter

In truth, a small number of people actually believe these lies, she said. Surveys by the Yale Program on Climate Change Communication in Connecticut have found between 8 and 9% of Americans are totally dismissive of climate change, believing it is either not happening, not human-caused or not a threat. Many of these people also endorse conspiracy theories about global warming.

“They’re just 8% of the population. A loud 8%, and very present online, but only 8%. So I would rather answer from the perspective of everybody else,” said Hayhoe, who is also an evangelical Christian whose most recent book is “Saving Us: A Climate Scientist’s Case for Hope and Healing in a Divided World.”

Here are some of the most common climate myths and lies experts say have been circulating this year:

Power grids in Texas, California and the Pacific Northwest all faced extreme heat events this summer. Each power system was pushed to the brink by the draw on electricity for air conditioning. And yet none broke.

Nonetheless, a false narrative circulated saying that solar and wind energy had made those power grids — and especially California’s — fragile and unable to cope with high demands.

In fact, the opposite is the case. While renewable energy does present challenges, especially during heatwaves, this year proved that careful planning and green innovations can successfully meet those challenges.

In Texas, a July heatwave caused the Electric Reliability Council of Texas to take emergency measures, including urging residents to cut demands and paying power operators as much as $5,000 per megawatt hour to keep generators running. ERCOT said two factors affected its ability to meet soaring demand: low wind power generation as well as outages at coal- and natural gas-fed power plants.

“Their answer is always ‘Stick with fossil fuel because renewables and efficiency can’t fill the need.’ This is the lie, those are the problem and not the solutions,” he said.

“Some of the biggest lies these days are focused on slowing the transition from fossil energy to cleaner alternatives by saying problems or shortcomings for renewables make it impossible,” he said.

Energy experts say the percentage of U.S. power that comes from renewables can go much higher than today’s relatively low numbers without causing severe stress on electrical systems. In April, records were set when 28% of U.S. electricity came from renewable resources.

Making investment decisions with environmental, social and governance factors in mind has been around for decades.

But recently it’s been decried as “woke capitalism” and a concerted effort has been waged to stop companies from taking all three, known as ESG, into consideration when they make investments. That’s especially true when it comes to taking environmental risk management.

More:GOP vs. ESG: Why Republicans are fighting ‘woke’ ESG investing

In the last year, 18 states have either proposed or adopted rules limiting the ability of the state government and public retirement plans to do business with entities deemed to “discriminate” against certain industries based on environmental, social and governance criteria, according to JD Supra, a legal news source. For example, Arizona’s State Board of Investment said in August that ESG considerations could not be considered in the investment management of its assets.

“It’s a sinister lie that’s deeply counterproductive, not just to the climate but also to people’s pocketbooks and pensions,” said Alicia Seiger, who teaches sustainability and energy finance at Stanford University’s law and graduate schools of business in California.

Telling companies they can’t consider all available information to make solid long-term investments “is insanity,” she said. “That should be determined by the investor, not the political system.”

Wrong: Believing in climate change is only for the far-left

Experts have noted an effort by some to lump in climate change with other liberal and progressive causes, such as racial justice. The implication is that those who believe global warming is an issue to be dealt with must also support a host of other objectives that are deemed “far-left.”

This also comes amid a movement to pressure businesses to view climate change as a hot-button political issue.

But that position ignores the many conservatives who are concerned about global warming and are working to fight it. They include the American Conservation Coalition, Conservatives for Clean Energy, Citizens for Responsible Energy Solutions and Congress’ Conservative Climate Caucus.

Wrong: There’s no hope for fixing climate change, so why try?

An increasingly frequent message centers around “doomerism,” the lie that it’s totally impossible to reduce greenhouse gas emissions to near-zero without devastating the economy and significantly reducing our standard of living, so there’s no point in even trying.

This is wrong because the technology to decarbonize much of the electrical grid already exists. Meanwhile, wind and solar, along with battery storage, are increasingly cheaper than coal and natural gas. Decarbonizing more hard-to-reach areas, such as steel and cement production and aviation fuel, will take longer but are in the works.

An Oxford University study released in September found a fast transition to decarbonized energy systems is cheaper than a slow one or not transitioning at all. Achieving zero-carbon energy systems is “possible and profitable” and will save the world at least $12 trillion compared with continuing current levels of fossil fuel use, it found.

A long-term lie has been that climate change isn’t real, but as shifting climate patterns have made that argument harder to make, it’s moved to one that says there are either no good alternatives to fossil fuels or the alternatives themselves cause problems and are too expensive.

“In other words, we are stuck with fossil fuels and there are no good alternatives, so burn baby burn,” said Jason Smerdon, a professor of climate physics at Columbia University in New York.

These arguments are mostly in aid of fossil fuel producers who want to keep making money as long as they can.

“Climate disinformation has always been about delaying any action on global warming,” Smerdon said. “They simply perpetuate the false assumption that we have no choice but the same old reliance on fossil fuels.”

More:We have the tools we need to fix climate change

If fact, the business community is jumping in with both feet because they see solid opportunities, said Julio Friedmann, chief scientist at Carbon Direct, a carbon-management firm and former professor at Columbia University.

“We have the technology we need and we have a lot of the market-aligning policies we need,” he said.

It’s no longer a question of “Is this even possible?” but instead “How quickly can we do it?”

“It’s a fundamentally different mindset,” said Friedmann. “That’s why I’m bullish on our ability to round these corners and get the job done.”

Stocks are heading for their biggest slump since May – WHIO TV 7 and...

News - September 20, 2021 0
Stocks slumped on Wall Street Monday, mirroring losses overseas and putting the S&P 500 index on track for its biggest drop since May.Worries about...

News - February 26, 2022 0
The US and western allies will place sanctions on the Russian central bank and remove some Russian banks from the Swift global payments system,...

News - July 14, 2022 0
NEW YORK — (AP) — Stocks are opening broadly lower on Wall Street after another hot reading on inflation, this time for wholesale prices,...
© 2022 Venture Current is a Flag Media LLC Publication. All Rights Reserved.
VC is part of the FLAG Token rewards network. Clients and partners can use FLAG Tokens for VC products and services.
VC runs 'Automatic' software. Stories posted here come from generic-topic Google news RSS feeds as well as client and partner-approved content.
If a story appears on this page that needs to be deleted due to licensing issues, please message us immediately so we can help you.