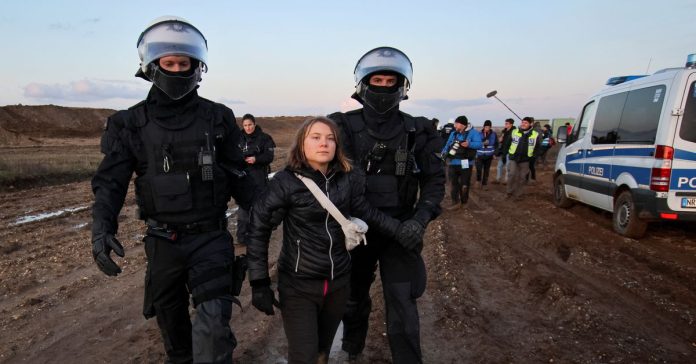 LUETZERATH, Germany, Jan 17 (Reuters) – Climate campaigner Greta Thunberg was detained alongside other activists on Tuesday during protests against the demolition of the coal village of Luetzerath but the entire group will be released later in the day, according to police.

“There is no reason to hold them for days. It might take hours or they will go immediately,” a spokesperson for regional police in Aachen said, speaking about the whole group of demonstrators.

Thunberg was held while protesting at the opencast coal mine of Garzweiler 2, some 9 km (5.6 miles) from Luetzerath, where she sat with a group of protesters near the edge of the mine.

The clearing of the village in the western state of North Rhine-Westphalia was agreed between RWE and the government in a deal that allowed the energy giant to demolish Lutzerath in exchange for its faster exit from coal and saving five villages originally slated for destruction.

Activists have said Germany should not be mining any more lignite and should focus on expanding renewable energy instead.

Riot police backed by bulldozers removed activists from buildings in the village with only a few left in trees and an underground tunnel by last weekend, but protesters including Thunberg remained at the site staging a sit-in into Tuesday.

Thunberg, was seen sitting alone in a large police bus after having been detained, a Reuters witness said.

“We are going to use force to bring you to the identity check, so please cooperate,” a policeman said to the group, according to Reuters footage.

“Greta Thunberg was part of a group of activists who rushed towards the ledge. However, she was then stopped and carried by us with this group out of the immediate danger area to establish their identity,” a spokesperson for Aachen police told Reuters, adding one activist had jumped into the mine.

Thunberg was carried away by three policemen and held by one arm at a spot further away from the edge of the mine where she was previously sat with the group.

She was then escorted back towards police vans.

The Swedish climate activist addressed the around 6,000 protesters who marched towards Lutzerath on Saturday, calling the expansion of the mine a “betrayal of present and future generations.”

“Germany is one of the biggest polluters in the world and needs to be held accountable,” she said.

Petrobras doubles down on hydrocarbons as part of $68bn investment plan

News - November 26, 2021 0
Petrobras of Brazil, Latin America’s biggest oil producer, is to boost its capital expenditure to $68bn over the next five years, as the state-controlled...

Meet some of the newest medical inventions changing surgery

News - January 3, 2022 0
Several companies in Israel and around the world have identified the hot market and developed technologies that combine robotics and artificial intelligence, creating a...

Fire crews rescue climber stuck on side of a cliff

News - May 24, 2022 0
President Zelensky meets US officials Russia’s president Vladimir Putin apparently survived an assassination attempt at the start of his invasion of Ukraine, the head...

Peloton under investigation by the SEC and Department of Justice

News - August 28, 2021 0
The home fitness company recalled its Tread and Tread+ treadmills last May after initially pushing back against a Consumer Products Safety Commission request that...
© 2022 Venture Current is a Flag Media LLC Publication. All Rights Reserved.
VC is part of the FLAG Token rewards network. Clients and partners can use FLAG Tokens for VC products and services.
VC runs 'Automatic' software. Stories posted here come from generic-topic Google news RSS feeds as well as client and partner-approved content.
If a story appears on this page that needs to be deleted due to licensing issues, please message us immediately so we can help you.