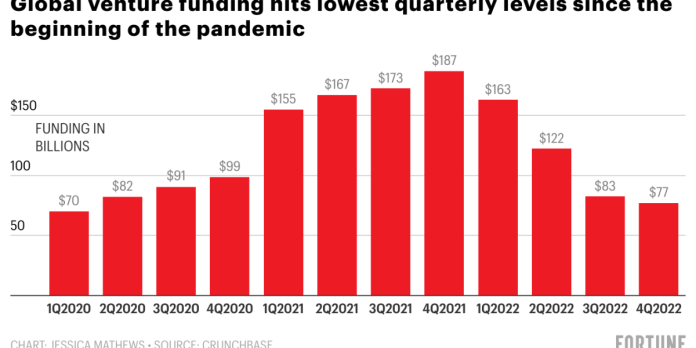 As we (slowly) roll into 2023, data is showing just how much the venture capital industry has slowed down in two years.

Absent some looming high-profile fundraises from companies like OpenAI, whose ChatGPT tool may reportedly help Microsoft’s Bing take on Google, many startups have struggled to garner the interest founders had become accustomed to the last couple years, or are having to sign off on less-favorable terms. Down rounds, while still few and far between, are still taking place, including at Instacart, which has reportedly cut its valuation to around $10 billion, according to The Information, down from the grocery delivery company’s heaping $39 billion valuation in 2021. CapitalG partner Sumi Das told me last month that he believes “almost all the later-stage companies” that were pre-IPO were thinking about docking their own valuations.

Every quarter, we are getting a better sense of just how much the venture capital industry has pulled back from an unprecedented 2021—and a clearer picture of how deals will likely play out moving forward. New data released today from Crunchbase shows that venture funding fell to $445 billion last year—down 35% from 2021 levels. Let’s be honest: Those numbers are still really high. In 2020, investors wrote checks worth some $342 billion to startups across the globe, per Crunchbase.

But it’s worth pointing out that the slowdown really sped up in the last two quarters of 2022—meaning that while VCs have been predicting a pullback for a year or so, it really only started playing out in the last six months. Indeed, in Q4 2022, funding levels hit their lowest point since the first quarter of 2020, back when VCs were dreading a collapse due to the COVID pandemic that never really panned out as expected.

The pullback is being felt even in seed stages now. Seed-stage and angel funding dropped 35% in the fourth quarter of 2022 compared to the year-ago period, per Crunchbase. And late-stage companies, which have been experiencing the brunt of the pullback, saw funding levels drop to $40 billion in the fourth quarter, down 64% from 2021 levels.

Here’s what the data is telling us now:

A little catching up to do… Since Term Sheet has been off on holiday, a whole lot of stuff has happened, particularly in the realm of FTX. For anyone who might have missed it, SBF was extradited to the U.S. and later released on a $250 million bond. The names of two of the guarantors on the bond are being withheld, though we know that his parents used their home in Palo Alto to secure the bond.

Speaking of that home in Palo Alto, Anne Sraders and I were just there a few weeks ago. It’s a home situated right on the Stanford University campus, and near several fraternity houses at the college. Anne and I stopped by early last month, knocking on the door to see if Bankman-Fried’s parents were around (they weren’t) and talking to a couple of neighbors (they declined to comment). Little did we know we had just missed SBF by only a few weeks, as this is the home where he will be serving house arrest until his trial. The university has shut down some streets and added extra security near their home, according to local reports.

Meanwhile, Caroline Ellison and Gary Wang were added to the civil CFTC complaint against SBF, FTX, and other entities, and the SEC filed a new complaint against them. (They have pleaded guilty to the Department of Justice’s federal fraud charges.) The two are cooperating with prosecutors, which will likely make things worse for SBF.

We want to hear from you… One of my Fortune colleagues is working on a list of the best professional networking groups specifically for founders and entrepreneurs. If you’ve joined any networking groups, clubs, or online communities that you’d like to recommend, we’d love to hear from you about why you joined and what made it a worthwhile experience. Was it the connections to investors? Advice from veterans of startup life? Or just a fun place to make new friends? If you’d like to share your thoughts, please email Paolo Confino at paolo.confino@fortune.com.

And now for January’s cartoon from Ian Foley…

– Eduvanz, a Mumbai-based education loan provider platform, raised $12.6 million in Series B extension funding. Rethink Education led the round and was joined by investors including Sequoia Capital, Juvo Ventures, and Unitus Ventures.

– Wendel, through its investment arm Wendel Growth, agreed to acquire a minority stake in Tadaweb, an Esch-sur-Alzette, Luxembourg-based intelligence platform, for €15 million ($15.91 million).

– TipRanks agreed to acquire The Fly, a Summit, N.J.-based digital publisher of financial news. Financial terms were not disclosed.

– Skyward Specialty Insurance Group, a Houston-based property and casualty insurance company, plans to raise up to $136 million through the sale of 8.5 million shares priced between $14-$16.

Data machine: the insurers using AI to reshape the industry

News - August 16, 2021 0
Take your medicine when the app tells you, do your exercise and eat well. As long as you “show good compliance” and share the...

News - July 5, 2022 0
Boris Johnson’s much-lauded trade deal with Australia will cut the price of an imported bottle of a wine only by “a couple of pence”,...

Pfizer plans to test a third dose of its COVID vaccine on infants and...

News - December 17, 2021 0
© 2022 Venture Current is a Flag Media LLC Publication. All Rights Reserved.
VC is part of the FLAG Token rewards network. Clients and partners can use FLAG Tokens for VC products and services.
VC runs 'Automatic' software. Stories posted here come from generic-topic Google news RSS feeds as well as client and partner-approved content.
If a story appears on this page that needs to be deleted due to licensing issues, please message us immediately so we can help you.