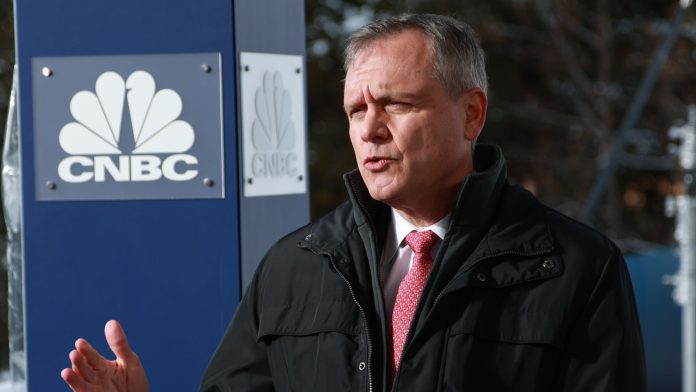 Honeywell International (HON) CEO Darius Adamczyk remains optimistic in his outlook for the global economy in 2023 and the company’s prospects heading into what’s expected to be an economic downturn. That’s in line with the Club’s belief that companies, like Honeywell, that make things for a profit stand to benefit in the year ahead. “There are going to be pockets of strength like our aerospace business” and energy segment, Adamczyk said Tuesday in an interview with CNBC from the World Economic Forum in Davos, Switzerland. However, he added, “some short-cycle businesses that are going to struggle.” Honeywell is a diversified industrial giant, focusing on crucial areas of the economy. Its products include airplane engines, industrial chemicals and carbon-capture technology to name a few. Adamczyk indicated that some of the major challenges last year will likely continue in 2023. “There are some indicators that the worst of inflation are starting to tip over, but we have to remember the Fed and other central banks have to have a fairly aggressive policy to make sure that inflation is under control.” Speaking with CNBC in early December , Adamczyk said he’s not “overly pessimistic on 2023,” adding he doesn’t believe the economy will be a “disaster.” Despite Tuesday’s decline, shares of Honeywell has gained more than 18% in the past three months compared to the S & P 500 ‘s more than 7% advance. Honeywell is set to release fourth-quarter financial results on Feb. 2. HON 1Y mountain Honeywell (HON) 1 year performance Climate change spending According to Adamczyk, spending on initiatives to combat the effects of climate change should hold up, even if there’s a recession. “I have not seen a correlation between a tougher economy and divestiture from a path to sustainability.” The top executive said that more than 60% of Honeywell’s overall business is comprised of climate-related solutions. “All these businesses have made pledges to be carbon neutral.” He added that “it’s going to take multiple years,” suggesting Honeywell’s energy technologies will be in demand despite a tougher economic period. China reopening The reopening of China after its strict zero Covid policy is a positive for the global economy, Adamczyk said, calling China one of the world’s “core international destinations.” He sees “tremendous pent-up demand” among businesses and consumers alike in the world’s second-largest economy. The loosening of pandemic restrictions there, particularly as they pertain to travel, is expected to bolster aerospace demand. That would be a positive for Honeywell’s aerospace services, which make up about a third of Honeywell’s revenue. Adamczyk anticipates the first quarter to be “a little rocky as the country opens up” — but over time, he’s excited by the prospect. The Club’s take We were pleased to hear optimism from Adamczyk Tuesday amid the heap of pessimism in the market. Honeywell has been able to deliver despite a challenging macroeconomic backdrop riddled with supply constraints, decades-high inflation and rising interest rates. Going forward, its aviation business is well-positioned to benefit from the recovery of China’s economy, while its sustainability technology solutions appear recession resistant. (Jim Cramer’s Charitable Trust is long HON. See here for a full list of the stocks.) As a subscriber to the CNBC Investing Club with Jim Cramer, you will receive a trade alert before Jim makes a trade. Jim waits 45 minutes after sending a trade alert before buying or selling a stock in his charitable trust’s portfolio. If Jim has talked about a stock on CNBC TV, he waits 72 hours after issuing the trade alert before executing the trade. THE ABOVE INVESTING CLUB INFORMATION IS SUBJECT TO OUR TERMS AND CONDITIONS AND PRIVACY POLICY , TOGETHER WITH OUR DISCLAIMER . NO FIDUCIARY OBLIGATION OR DUTY EXISTS, OR IS CREATED, BY VIRTUE OF YOUR RECEIPT OF ANY INFORMATION PROVIDED IN CONNECTION WITH THE INVESTING CLUB. NO SPECIFIC OUTCOME OR PROFIT IS GUARANTEED.

Honeywell International (HON) CEO Darius Adamczyk remains optimistic in his outlook for the global economy in 2023 and the company’s prospects heading into what’s expected to be an economic downturn. That’s in line with the Club’s belief that companies, like Honeywell, that make things for a profit stand to benefit in the year ahead.

All the ways the iPhone 13 let us down: Missing features we’re still waiting...

The clock runs down on America’s pastime

News - December 2, 2022 0
Hinton was asked to give the talk at the conference in recognition of his paper from a decade ago, "ImageNet...

News - August 30, 2021 0
"This is the first case in New Zealand where a death in the days following vaccination has been linked to the Pfizer COVID-19 vaccine....
© 2022 Venture Current is a Flag Media LLC Publication. All Rights Reserved.
VC is part of the FLAG Token rewards network. Clients and partners can use FLAG Tokens for VC products and services.
VC runs 'Automatic' software. Stories posted here come from generic-topic Google news RSS feeds as well as client and partner-approved content.
If a story appears on this page that needs to be deleted due to licensing issues, please message us immediately so we can help you.