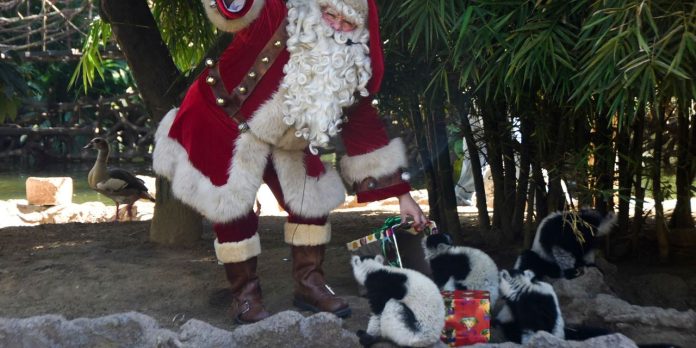 It’s the time of the year when the traditional seasonal lift for U.S. stocks known as the “Santa Claus rally” usually takes place. But unlike past holiday seasons, this one may get bogged down by the risks of a recession and continued rise in interest rates during the new year.

The Santa Claus rally refers to the stock market’s tendency to rally in the last five trading sessions of a calendar year and the first two sessions of the next year. Friday marked the start of the period, which will run through Jan. 4 this time around. Analysts said investors shouldn’t count on stock-market gains this holiday season, though some market participants are still holding out hope.

History underscores just how bullish this final stretch of the year typically tends to be, and how relatively uncommon it is to see stock-market declines before and after Christmas. Seventy-two years of data on the S&P 500 SPX and its predecessor index, the S&P 90, shows that only 15 to 16 holiday seasons have failed to produce a rally. Of those seasons, seven were followed by first-quarter losses in the index, according to Dow Jones Market Data.

Any Santa Claus rally to close out the 2022-2023 season “will be very short-lived in nature, and we will quickly give back those gains because there just is not going to be any sustainable rally with the Federal Reserve maintaining high interest rates,” said Eric Sterner, chief investment officer at Apollon Wealth Management, which manages $3.1 billion from Mount Pleasant, S.C.

“It will likely be all of 2023 before inflation comes down and, on top of that, we have major earnings revisions that need to happen,” Sterner said via phone. He said earnings per share could drop by 15% to 20% on average, versus current estimated gains of 4% to 5% for next year, and that the S&P 500 could retest its October low of around 3,500 in the first half of 2023 before ending the year flat.

Stocks have suffered in 2022, with the S&P 500, Nasdaq and Russell 2000 all posting double-digit percentage declines, as the Federal Reserve continued to hike interest rates to arrest inflation running at four-decade highs. Dow industrials have fared better, but were still down 8.6% year to date through Friday.

Read: Wall Street’s stock-market forecasts for 2022 were off by the widest margin since 2008: Will next year be any different?

When stock-market gains failed to materialize during the Santa stretch, the S&P 500 eked out just a 0.53% average gain in the first quarter that followed, according to Dow Jones Market Data. That’s in contrast to the majority of times when there were holiday-season gains, with the index producing an average 2.49% first-quarter advance thereafter.

This year “is certainly a good candidate for a Santa Claus rally, given how bad the selloff was this year, but that doesn’t mean you’ll have a good year ahead, on average,” said Eric Diton, the Boca Raton, Fla.-based president and managing director at The Wealth Alliance, which oversees $1.5 billion in managed and brokerage assets. “The bigger correlation is the January indicator, in which if you a positive January, you have a higher probability of having a positive year.”

“If corporate earnings can hold up after this massive tightening by the Fed and pretty big reduction in the money supply, the stock market should have a pretty good year,” he said via phone. “If earnings fold, we’ll have another leg down. My gut is saying that we could have a mild recession, but I’m pretty optimistic about the second half of 2023: The Fed should be done raising rates by then, taking pressure off of the market.”

and S&P 500 Index have each traded higher almost 80% of the time during the seven-day holiday period since 1950, gaining an average of 1.38% and 1.32% respectively, according to Dow Jones Market Data. The Nasdaq Composite
COMP,

If Dow industrials and the S&P 500 finish higher for the 2022-2023 season, that would be their seventh straight successful Santa Claus rally and their longest winning stretch since the string of eight that occurred between 1969-1970 and 1976-1977.

Read: Wall Street’s stock-market forecasts for 2022 were off by the widest margin since 2008: Will next year be any different?

Given a dearth of major market-moving news between now and year-end, “conditions are definitely ripe for a rally right now that could coincide with what we typically experience at this time of the year,” said Keith Buchanan, senior portfolio manager at GLOBALT Investments in Atlanta, which oversees $2.5 billion. “With recession risks looming, sentiment has been pretty beaten down and there’s pessimism in the markets. When that’s the case, it can typically set up a bounce of sorts.”

GLOBALT remains somewhat conservative in its positions, while waiting for opportunities to pivot to a more aggressive stance, Buchanan said via phone. Meanwhile, market participants are waiting for what he calls a “blue-skies” scenario, in which inflation eases further in 2023 and the Fed engineers a soft landing by slowing the economy without throwing millions of people out of work.

“A lack of a Santa Claus rally would set the tone early in 2023 of a market needing some or any optimism in order to rally in the face of what a lot of economists see coming: a recession,” he said. Alternatively, a Santa Claus rally that materializes “wouldn’t necessarily mean 2023 will be a bounceback year, but might help the rest of January.”

Also see: Is a 2023 stock-market rebound in store after 2022 selloff? What history says about back-to-back losing years.

The economic calendar is light in the holiday-shortened week ahead. The stock market is closed on Monday in observance of Christmas Day, which falls on Sunday, and is shut again on Jan. 2 in observance of the New Year’s Day holiday.

Wednesday brings the pending home sales index for November. On Thursday, weekly initial jobless claims are released, followed the next day by the Chicago purchasing managers index for December.

News - September 6, 2021 0
We’re only a week away from Apple’s rumored September special event at which the company is expected to introduce the so-called “iPhone 13.” Now...

News - April 12, 2022 0
Emmanuel Macron has climbed down from a campaign pledge to raise the retirement age in France to 65 as he seeks to win over...

The case for a ‘powerful rally’ in the stock market is building, MKM Partners...

News - October 14, 2022 0
A powerful counter-trend rally could be on the horizon, but may not come immediately, according to MKM Partners. Actual or expected softness in indicators...

News - November 12, 2022 0
Combinatorial problems often arise in puzzles, origami, and metamaterial design. Such problems...
© 2022 Venture Current is a Flag Media LLC Publication. All Rights Reserved.
VC is part of the FLAG Token rewards network. Clients and partners can use FLAG Tokens for VC products and services.
VC runs 'Automatic' software. Stories posted here come from generic-topic Google news RSS feeds as well as client and partner-approved content.
If a story appears on this page that needs to be deleted due to licensing issues, please message us immediately so we can help you.