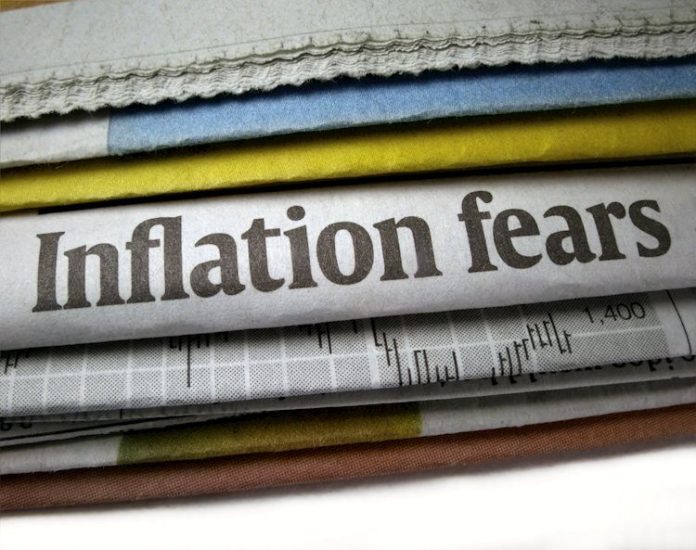 CPI and PCE inflation data from the BLS, chart by Mish.

The great moderation is the term economists use for the regime change starting in 1983 after Fed chairman Paul Volcker allegedly broke the back of inflation by spiking interest rates to 20 percent. 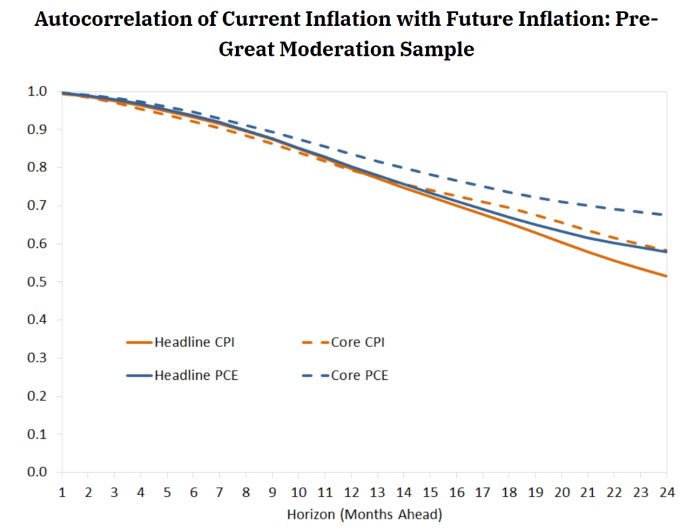 Credit for this post idea goes to the St. Louis Fed writers Michael McCracken and Trần Khánh Ngân for their article Will High Inflation Persist?

Even though inflation started to cool toward the end of 2022, it is still unclear how long it will take to return to its long-run average—that is, if currently high inflation will persist.

Pre-Great Moderation, there are some modest differences in the persistence profiles of the headline and core measures of inflation, but overall, inflation is quite persistent even at longer horizons like one and two years into the future. In fact, autocorrelation for each lies above 0.5 two years out, suggesting it could take quite some time before these measures of inflation revert to the mean prior to the Great Moderation.

Although all four measures of inflation persistence move closely with one another pre-Great Moderation, there is a clear delineation between the persistence profiles of core versus headline measures during the Great Moderation. As the next figure illustrates, the correlation between future and current inflation in this period declines at a much faster pace for headline CPI and PCE than for core CPI and PCE.

Starting at nearly 1 at the one-month-ahead horizon, correlation coefficients remain above 0.7 at the one-year-ahead horizon for both core measures, while they had already dropped well below 0.5 for both headline measures. 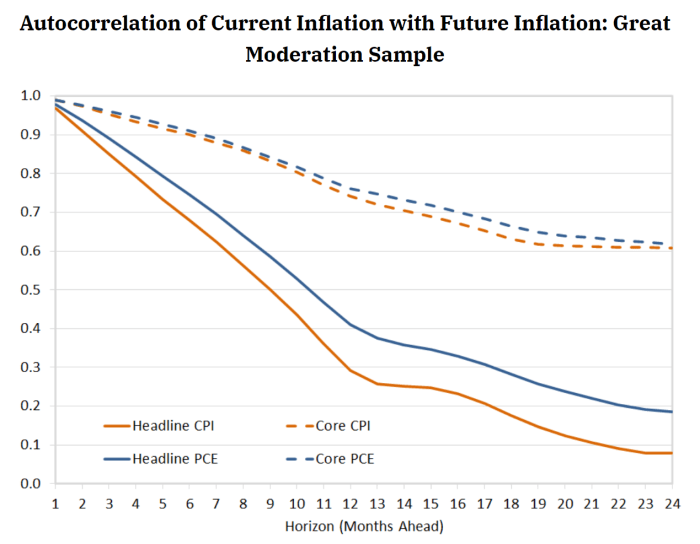 What regime are we in?

Looking ahead, whether inflation persists may depend on which of the two regimes that we are in.

In the economic literature, a regime switch occurs when there are significant breaks in the patterns of key macroeconomic variables from one period to the next.

“What now?” is the key question. The St. Louis Fed did not offer an opinion but I will.

The regime has changed again. Inflation will be more persistent than most think. 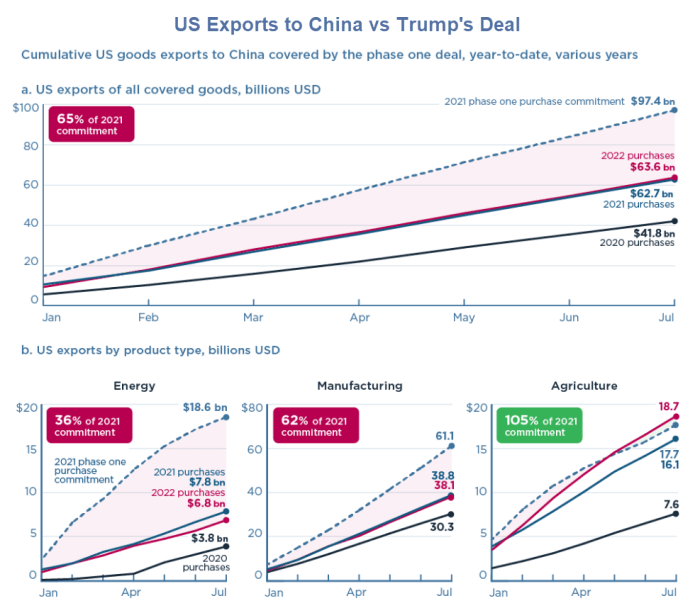 First a Trade War, Now a Real War, Why US Exports to China Continue to Suffer

President Biden not only continued Trump’s trade war with China, he escalated it. There is no reason to believe relations between the US and China will do anything but get worse because of Taiwan.

Under WTO rules, much of Biden’s IRA is really an illegal subsidy. The EU cannot do in 5 years what the US can pass in a session if one political party is in clear control.

Point six where do we get the minerals 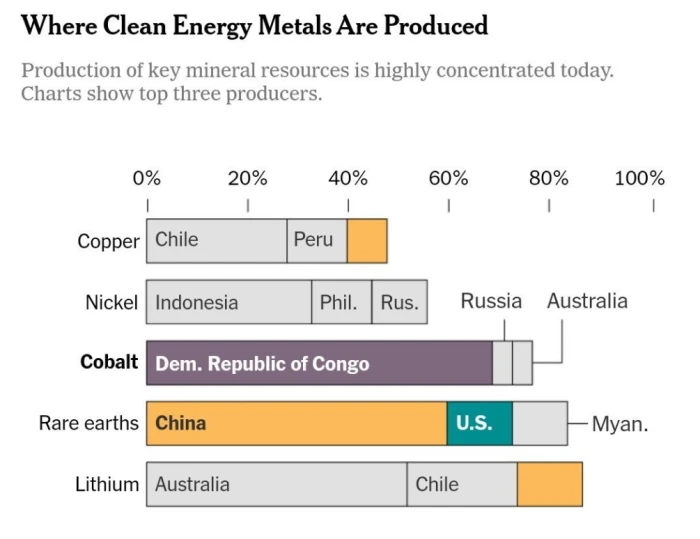 A Mad Rush to Build More EV Factories, But Where are the Minerals?

Incentives and free money from the Inflation Reduction Act has triggered an investment boom to build more electric vehicles. 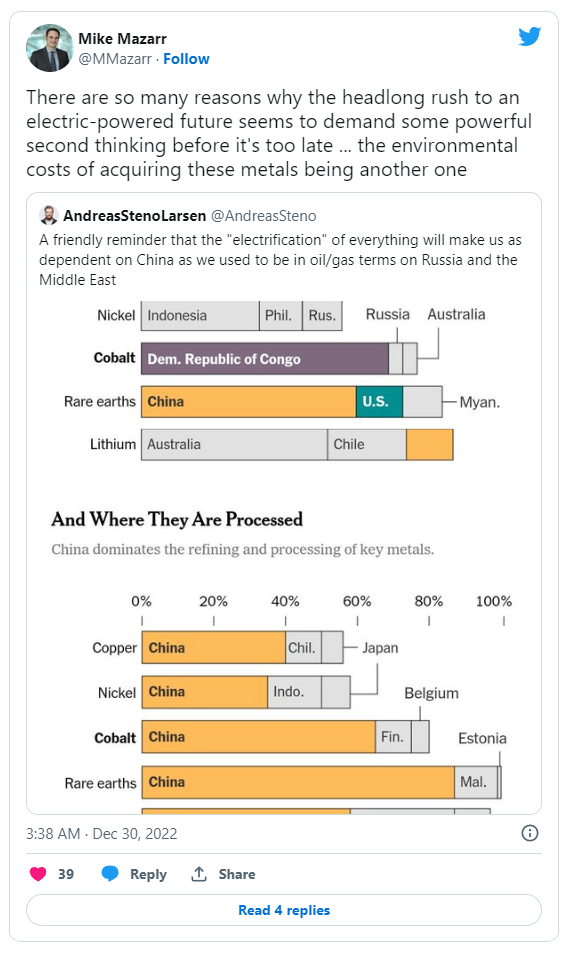 US allies are steaming mad at Biden for his climate change war. Let’s discuss who fired the first shot and who is escalating the war. 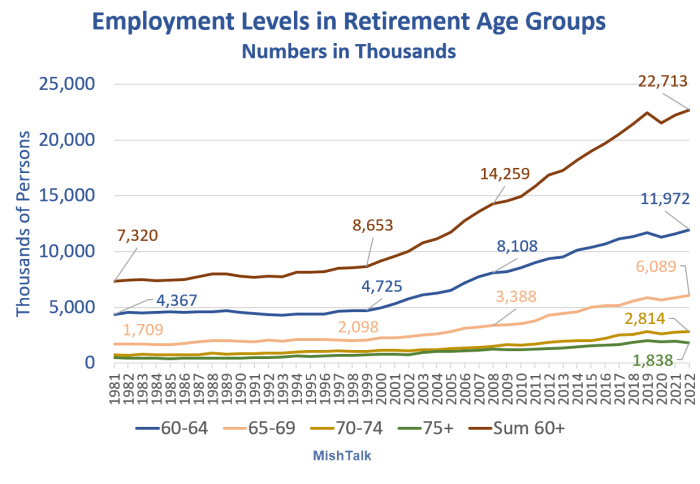 Note that There are 158 Million People Working, 106 Million Not Working

There are 22.7 million people of retirement age who are still working. At an increasing rate over time, these people will retire. Replaced by whom? At what levels of productivity?

By the end of the decade nearly all of this group will be retired. Who will support this group and increasing Medicare needs given the percentage of full time workers keeps dropping.

On December 31, I noted Act Your Wage is the New Meme as Career Ambitions Plunge

There’s no time to do extra unpaid work when you need a second part-time job just to pay the bills.

With millions due to retire, competition for jobs will increase.

Put this all together you have the makings of an inflationary wage spiral coupled with decreasing productivity.

It’s not all one sided. In a subsequent post I will take a look at deflationary forces.

In the short-term, the Fed via demand destruction and hiking rates will likely succeed in getting inflation lower.

However, the Fed will have a hard time keeping inflation lower due to de-globalization, decarbonization, demographics, and inept political decisions here and in the EU.

News - August 18, 2022 0
Logitech has revealed a new audio accessory exclusive to the Meta Quest 2 headset, called the Chorus, which the company claims provides an “ultra-realistic”...

News - January 26, 2022 0
Here we go again. Another bug, another round of speculations that Sony’s toying with PS5 backwards compatibility with PS1, PS2, and PS3 games. This...

Following in Merkel’s footsteps will be a daunting challenge

News - September 25, 2021 0
As Germany goes to the polls, there is no obvious successor as chancellor. Voters will have her legacy and attributes in mind, while officials...

Russian-Ukraine war could hasten global cryptocurrency adoption, but not in the way you think

News - March 25, 2022 0
In a letter to shareholders on Thursday, Blackrock CEO Larry Fink wrote Russia’s invasion of Ukraine has disrupted the world order...
© 2022 Venture Current is a Flag Media LLC Publication. All Rights Reserved.
VC is part of the FLAG Token rewards network. Clients and partners can use FLAG Tokens for VC products and services.
VC runs 'Automatic' software. Stories posted here come from generic-topic Google news RSS feeds as well as client and partner-approved content.
If a story appears on this page that needs to be deleted due to licensing issues, please message us immediately so we can help you.