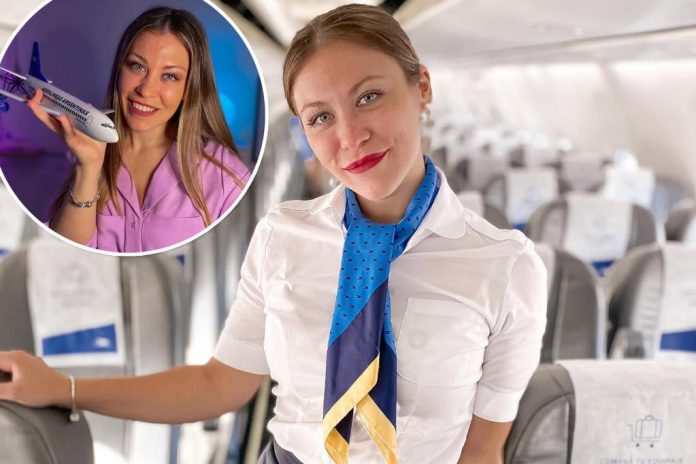 Turbulence can really shake things up — in a relaxing way — on a flight, according to the latest whistle-blowing plane crew member.

Flight attendant Barbie — a k a Barbiebac.ok on TikTok — has revealed in a now-viral video that some of the crew actually love when a plane hits a bit of a bumpy ride.

Barbie, who hails from Argentina but is currently based in Italy, revealed that the scary moments for passengers actually give the overtaxed workers a chance to, well, take a break.

“Flight attendants love turbulence — because we can rest a little bit as we should stay seated, and we cannot get up to provide the food service, for example,” said the 29-year-old, just one of several flight attendants racking up millions of views amid Americans’ frustrations with air travel following flight cancellations, delays and luggage issues.

“Sometimes, flight attendants and pilots don’t tell all the truth to the passengers,” Barbie, who asked not to reveal her last name and airline for privacy reasons, admitted to NeedToKnow.Online. “They do this so they try not to scare them and to prevent a potentially dangerous situation during the flight. When you’re in the sky, you’ve no way out, so you need to minimize risks.”

The sky spy — who posts regularly to her 3.4 million followers about common myths of air travel — also revealed that the black box, used to record conversations in the cockpit, is not actually black but orange.

“For some reason, everyone thinks that the black box of an airplane is actually black, but I have to tell you that’s not true. In fact, the color is orange, and there is a reason for that,” Barbie revealed.

“The orange color is not a whim, this color has been chosen to be easy to find in the ground or in the sea in case of an accident.”

The Argentinian is far from the first flight pro to spill secrets regarding the airline industry.

Recently, a pilot of a Boeing 747 revealed where human feces goes when people flush it down the airplane toilet.

“Did you know that whenever you flush the toilet on an aircraft it actually doesn’t dump out into the population down below?” asked Garrett, 29, based in Dallas, Texas, in his trending No. 2 tell-all, which stockpiled a massive 4.2 million views. “It goes through plumbing to the rear of the aircraft in the seal compartments, where the grounds crew at the destination will remove all that waste.”

“If you hear just one tone, that means that a passenger is calling one of the flight attendants from their seat or they could be calling us from the lavatory,” the popular TikTok star in the skies explained. “If you hear three of those high-low chimes, that means it’s an emergency — but you never have to hear that.”

A third flight attendant, Brenda Orelus, revealed that the dirtiest place on the plane was not the bathroom — but the seat-back pocket.

Orelus continued, “It’s because they’re never cleaned. Unless somebody vomits, or there’s something ooey, gooey and pus coming out of there, it doesn’t get cleaned.”

News - December 4, 2022 0
Chinese cities accelerated the loosening of zero-Covid restrictions over the weekend, building expectations that Beijing could ditch the pandemic policy that has kept the...

News - January 14, 2023 0
Social media users were shocked and outraged over a recent anti-Israel rally put on by pro-Palestinian protestors at the University of Michigan this week.Clips...

Putin under pressure: what is Russia’s next move?

Amazon to Spend Billions on Fleet of Internet Satellites

News - April 7, 2022 0
Amazon to Spend Billions on Fleet of Internet Satellites The e-commerce giant's Project Kuiper has purchased up to 83 launches Amazon.com Inc. is stepping up plans...

Copper prices — traditionally a barometer for the global economy — are expected to...

News - December 13, 2022 0
Sheets of copper cathode are pictured at BHP Billiton's Escondida, the world's biggest copper mine, in Antofagasta, northern Chile March 31, 2008.Ivan Alvarado |...
© 2022 Venture Current is a Flag Media LLC Publication. All Rights Reserved.
VC is part of the FLAG Token rewards network. Clients and partners can use FLAG Tokens for VC products and services.
VC runs 'Automatic' software. Stories posted here come from generic-topic Google news RSS feeds as well as client and partner-approved content.
If a story appears on this page that needs to be deleted due to licensing issues, please message us immediately so we can help you.