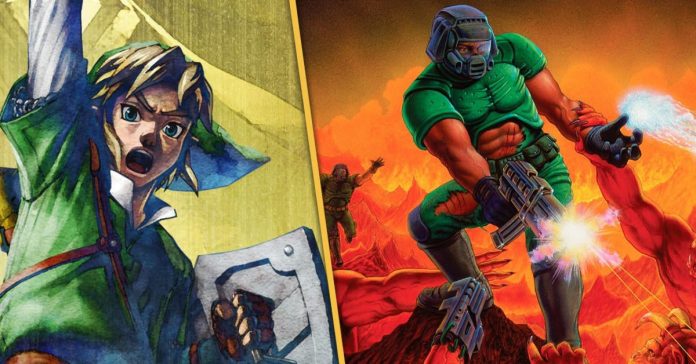 There are few video games as influential and important as The Legend of Zelda. Since its release for the Nintendo Entertainment System, the original Zelda has had a profound impact on gamers and developers all over the world. The same can easily be said for Doom. The first-person shooter similarly changed the landscape of the video game industry when it debuted. The idea of combining these two games might seem unusual, but that’s exactly what developer @DeTwelveGames did with their “The Legend of Doom” mod! The mod actually dropped in 2021, but @DeTwelveGames hinted just a few weeks ago that they might continue to look for new ways to improve the game before moving on to their next project.

Fans interested in downloading the mod can do so right here. A video of the mod in action was shared by @DavidBCooper on Twitter, and can be found in the Tweet embedded below.

I cannot believe it took me this long to find out someone recreated The Legend of Zelda in the Doom engine! I’m gonna play the whole dang thing. pic.twitter.com/bRKHzTKsrC

It really is amazing to see this mod in action! The enemy designs and textures from the first Zelda game work in this context much better than anyone would have ever expected, and @DeTwelveGames has lovingly recreated them. If players look closely, they’ll even notice that the DoomSlayer has been given a hat to match the one Link wears. There’s a lot of attention to detail in this mod, and that makes it even better than a lot of the other Doom mods that have been released online. For longtime Zelda fans, this is such a cool effort, and well worth looking into!

This unofficial crossover will have to tide fans over, as an official Zelda crossover with Doom likely won’t happen anytime soon! The closest thing we’ve had to seeing DoomSlayer and Link in the same game is a Mii Fighter costume available for purchase in Super Smash Bros. Ultimate. Given Doom‘s longstanding popularity, many thought that DoomSlayer might get added to the fighting game, but it seems it wasn’t meant to be!

Are you planning to check out this Doom mod? What do you think of the original Zelda game? Let us know in the comments or share your thoughts directly on Twitter at @Marcdachamp to talk all things gaming!

US economic growth slowed in fourth quarter of 2022

News - January 26, 2023 0
US economic growth slowed marginally in the final quarter of 2022, as the Federal Reserve’s aggressive campaign to raise borrowing costs began to weigh...

News - December 10, 2021 0
U.S. Sen. Josh Hawley, R-Mo., appeared on "The Ingraham Angle" on Thursday night, where he spoke about President Biden’s virtual "Summit for Democracy" with...

Editorial: A new, unfiltered Trump social platform where lies will know no boundary |...

House tax bill would likely force Peter Thiel to pull $5 billion from his...

News - September 17, 2021 0
Billionaire Peter Thiel, PayPal co-founder and chairman of Palantir Technologies, during a news conference in Tokyo, Japan, on Nov. 18, 2019.Kiyoshi Ota/Bloomberg via Getty...
© 2022 Venture Current is a Flag Media LLC Publication. All Rights Reserved.
VC is part of the FLAG Token rewards network. Clients and partners can use FLAG Tokens for VC products and services.
VC runs 'Automatic' software. Stories posted here come from generic-topic Google news RSS feeds as well as client and partner-approved content.
If a story appears on this page that needs to be deleted due to licensing issues, please message us immediately so we can help you.