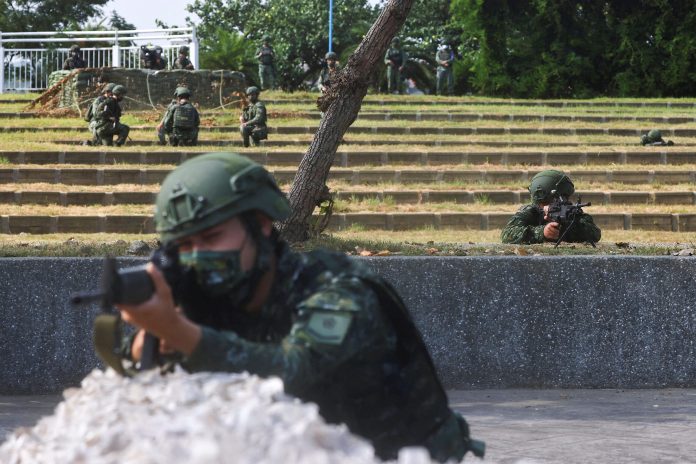 KAOHSIUNG CITY, Taiwan — After close to a decade, men over 18 in Taiwan will again be required to serve a full year in the military rather than just four months, a return to a conscription policy that had been in place since 2013. The new requirement will be phased in over the year and will reportedly apply to males born on or after Jan. 1, 2005.

Speaking to the nation late last month, Taiwan’s President Tsai Ing-wen pointed to Ukraine holding off the might of the Russian military for more than 300 days, something she argued was due in no small part to Ukraine’s readiness. Tsai said Ukraine’s strong resistance capacity had “bought time” that allowed the international community to come to its aid. Taiwan’s president said she and her cabinet, as well as military officials, had spent much time debating the issue and that although it was “a difficult choice,” expanding the length of conscription was necessary. She also announced that the basic monthly pay for conscripts would jump from around US$212 per month to just under US$662.

Russia’s underperformance in the war in Ukraine has been highly instructive and motivating for Taiwan’s civilian and military leaders. But of course, China has also been taking notes as it watches Ukraine — and for Taiwan, the hope is that China is learning one major lesson from Russia’s stumbles: that even a vastly overpowered nation is hard to beat on its home turf, especially if its people are trained and willing to resist.

Experts in both Taiwan and the United States, though, have long expressed worries about a seeming complacency in Taiwan regarding defense. Taiwan’s leadership says they are addressing these concerns with more scrutiny of weapons and tactics — and by reinstating a year of conscription.

In comments to Fox News Digital, Su Tzu-yun, a research fellow and director of defense strategy at the Taipei-based Institute for National Defense and Security Research, notes that an all-volunteer military is a preference, but both here and globally, it’s becoming harder to recruit professional soldiers.

“China has increased its force projection capabilities,” Su said. “All of this means that Taiwan needs to increase the size of its active army.” Su noted Taiwan is carefully studying the examples of nations such as Sweden, Norway and Israel — all of which maintain conscription — as it seeks to overhaul its defense configuration so that “the sum of manpower and firepower can be multiplied for defense by asymmetrical battle strength.”

“If it’s going to be four months, we might as well not do it at all. So much money was wasted on these few months of training,” a retired Taiwanese air force captain told Fox News Digital. Choosing to withhold his name, the retired captain said, “No one wants a war, and I don’t think one is imminent, but if it comes, we need to have soldiers who at least know the basics.” He also compared Taiwan’s military requirements to those in Israel and said a discussion on mandatory training for women could be a good next step.

It’s not hard to understand why Taiwan (officially called the Republic of China) sees a need for conscription; its massive neighbor to the west, the People’s Republic of China (PRC), refuses to disavow using force to “reunify” with this self-governed, fully democratic island of around 23 million. The term “reunify,” however, isn’t accurate as Taiwan has never been ruled by the Chinese Communist Party (CCP).

After close to a decade, men over 18 in Taiwan will again be required to serve a full year in the military rather than just four months, a return to a conscription policy that had been in place since 2013.
(Reuters/Ann Wang/File)

China’s bullying of Taiwan permeates every part of the relationship between the two sides of the Taiwan Strait, from China blocking Taiwan’s participation in health conferences organized by the United Nations to a simulated naval blockade and live missile tests after former U.S. Speaker of the House Nancy Pelosi defied Beijing and visited Taipei in August 2022.

The new conscription policy was met with a predictable mix of emotions and opinions, but somewhat surprisingly, strong opposition has been sparse and the prevailing response — from both sides of Taiwan’s main political divide — has been support for the government’s move. Before Russia’s February 2022 invasion of Ukraine, however, this would likely not have been the case.

CHINA WARNS US NOT TO CROSS ‘RED LINE’ ON TAIWAN, USE ‘SALAMI TACTICS’

Ian Easton, author of “The Chinese Invasion Threat,” an influential book that examines what a China-Taiwan conflict might look like, told Fox News Digital that he found the change “remarkable” and said, “Only very rarely does a liberal democracy undertake difficult reforms like this in peacetime. Not long ago, the national conscription system was regarded as the third rail of Taiwanese politics: touch it and you die. But now any politician in Taiwan who doesn’t take national security seriously is likely to be in hot water at the polls.”

Easton’s observation is illustrated by Enoch Wu, a politician with the ruling Democratic Progressive Party (DPP). Wu, a candidate in a Jan. 8 by-election for a seat in Taiwan’s parliament, made his stance clear in a May 2022 New York Times op-ed, writing, “We seem to expect American sons and daughters to risk their lives to protect our home, while relieving our own of that very duty.” Tough words, but it’s a sentiment that’s picked up significant traction over the last year.

Of course, not everyone in Taiwan is happy about the upcoming change. Some parents and their sons have voiced displeasure and concerns. When Teresa Chen, a coffee shop owner in the southern city of Kaohsiung, heard the news, she and her husband did the math and were relieved that their 21-year-old son would not be affected by the change.

“I don’t want him to lose a year, especially as he’s not interested in the military,” Chen told Fox News Digital.

On the other side of the same Taiwanese port city of almost 3 million, another set of parents sighed in resignation — 14-year-old Alen is now set to serve a year, and while neither Alen’s parents nor the junior high schooler are looking forward to it, they all agree there are benefits to military service, from character-building to better physical fitness. Other parents agree. One Taipei father told Fox News Digital he’d rather have his son properly prepared for conflict, which of course he hopes never occurs.

A good number of people in Taiwan often argue there’s little point in trying to hold off a full-on invasion from China as it is significantly stronger by almost every military standard, but experts such as Michael Turton, a long-term Taiwan-based writer, blogger and advocate for keeping the island’s democracy free from interference from Beijing, says this kind of “defeatist” attitude is due in no small part to Chinese propaganda.

“Like a dull supervillain, Beijing constantly monologues about the inevitability of Taiwan’s annexation. This is often echoed by local pro-China parties,” Turton told Fox News Digital.

Soldiers reload a M110 self-propelled howitzer during a live-fire military exercise in Pingtung, Taiwan, on May 30, 2019.
(Reuters/Tyrone Siu)

“A hidden factor is that every male [now] experiences a program of conscription that is obviously ineffective in producing a useful military response … so it [the defeatist propaganda] does have some effect,” says Turton.

Kitsch Liao, assistant director of Atlantic Council’s Global China Hub, told Fox News Digital that the same “defeatist” attitude is sometimes expressed in uninformed comments by some in Taiwan about the “low quality” and “ineffectiveness” of weapons being sold to Taiwan by the United States.

“There is some back and forth,” said Liao, “but mostly what we buy reflects what Taiwan asks for, so honestly if there are any complaints about what we’re getting, we need to look closer at our own evaluation process. That said, there is a deeper issue regarding a lack of transparency in our force planning and evaluation processes, which can fail to engender the support our armed forces desperately need both from within and without.”

As in South Korea, Taiwan wrestles with concerns that mandatory time in the military could mean delayed careers and disrupted lives for its young men, but most seem to agree these concerns are dwarfed by the existential threat posed by Beijing.

A People’s Liberation Army member looks through binoculars during military exercises as Taiwan’s frigate, Lan Yang, is seen in the distance, Aug. 5, 2022.
(Lin Jian/Xinhua via AP)

“The Chinese Communist Party is carrying out the largest peacetime military buildup attempted by any country in at least a century,” Ian Easton added. “Will Taiwan’s defense reforms be too little too late? Quite possibly. But much still remains to be seen, and there is much the U.S. could do to help Taiwan maximize the hard task it is undertaking. If it isn’t already, Washington should be looking to flood Taiwan with military trainers, advisers and liaison officers and begin large bilateral defense drills and joint patrols of the Taiwan Strait. Despite the monumental threat posed by the PRC, American military engagement with Taiwan is still surprisingly limited and tenuous.”

Whether the United States should or would send more trainers or engage in joint patrols with Taiwan is up for debate, but most Taiwanese seem to be closing ranks and agreeing that, at the very least, men of fighting age should be trained well enough to offer a genuine resistance to a potential Chinese invasion. Local news reported that by 2024, conscripts in Taiwan will undergo a longer boot camp, fire significantly more live rounds and be trained to fire powerful weapons, such as the U.S. Javelin and Stinger missiles.

Eryk Michael Smith is a Taiwan-based correspondent for Fox News Digital, who since 2007, has worked both as a broadcast journalist for the island’s only English-language radio station, ICRT, as well as with numerous other publications and local news outlets. In 2021, he and co-host John Ross debuted Formosa Files, the only podcast about Taiwanese history in English. Smith’s journalism focuses on Taiwan-China relations, local politics, as well as science and technology developments in the greater China region. He is based in Taiwan’s largest southern city, Kaohsiung. He can be followed @ErykSmithTaiwan

The moment of truth over Taiwan is getting closer

News - October 11, 2021 0
Would America go to war over Taiwan? That question has seemed fairly abstract for decades. Now it is increasingly urgent. The Chinese air force...

The Challenges of Buying a Town’s Beloved Small Business

News - July 27, 2022 0
When a business changes hands, the revenue drop can be devastating. Here’s how one couple tried to make sure that didn’t happen. Source

Fallout 5 should go back to where it started: California

News - June 30, 2022 0
Live news updates: Crypto lender Celsius considering restructuring debts Source
© 2022 Venture Current is a Flag Media LLC Publication. All Rights Reserved.
VC is part of the FLAG Token rewards network. Clients and partners can use FLAG Tokens for VC products and services.
VC runs 'Automatic' software. Stories posted here come from generic-topic Google news RSS feeds as well as client and partner-approved content.
If a story appears on this page that needs to be deleted due to licensing issues, please message us immediately so we can help you.