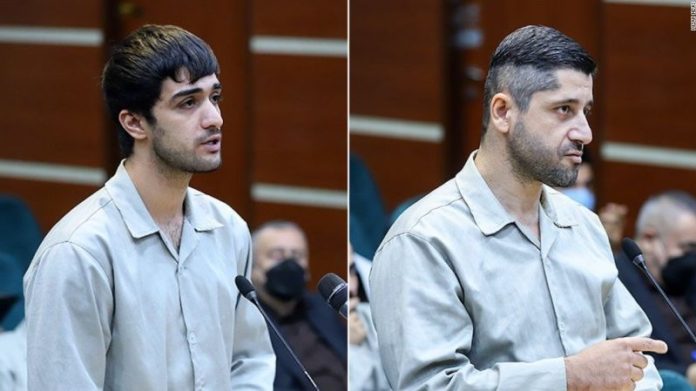 Iran executed two men Saturday, according to state-affiliated Fars News, bringing to four the total number of people executed in relation to the protests that have swept the country since September.

Mohammad Hossein Aghasi, a lawyer advocating for Karami, posted to Twitter Saturday saying that Karami was not given final rights to speak to his family before his execution. The lawyer added that Karami had begun a dry food hunger strike Wednesday as a form of protest against officials for not allowing Aghasi to represent him.

In December Karami’s parents took to social media in a plea for his life. “Please, I beg of you to please lift the execution order from my son’s file,” the father of the 21-year-old karate champion said.

As many as 41 more protesters have been sentenced to death in Iran, according to statements from both Iranian officials and in Iranian media reviewed by CNN and 1500Tasvir, but the number could be much higher.

Meanwhile, the politics editor of independent Iranian newspaper Etemad Online, Mehdi Beyk, was detained on Thursday, according to a tweet from the publication. The arrest came amid a crackdown by Iranian authorities following the protests sparked by the death of 22-year-old Mahsa Amini last year after she was apprehended by the state’s morality police for allegedly not wearing her hijab properly. The protests have since coalesced around a range of grievances with the authoritarian regime.

Beyk was detained by officials from Iran’s Ministry of Information, his wife, Zahra Beyk, said on Friday.

He was arrested after he “interviewed the families of several of those arrested in the ongoing demonstrations,” according to pro-reform activist outlet IranWire.

The journalist’s “mobile phone, laptop, and belongings were confiscated,” his wife tweeted. It is unclear so far why Beyk was arrested.

Iranian officials have previously arrested some individuals for their criticism of the government’s response to the demonstrations.

One of Iran’s best-known actresses, Taraneh Alidoosti, was released on bail Wednesday, state-aligned ISNA said, after she was arrested following her criticism of a protester’s execution.

Known as a feminist activist, Alidoosti last month published a picture of herself on Instagram without the Islamic hijab and holding a sign reading “Women, Life, Freedom” to show support for the protest movement.

Alidoosti was not formally charged but was initially arrested for “lack of evidence for her claims” in relation to her protest against the hanging of Mohsen Shekari last month in the first known execution linked to the protests.

The Crown season five review: This Netflix show is the definition of first world...

The economic consequences of Jerome Powell

News - March 22, 2022 0
William McChesney Martin famously observed that the Federal Reserve’s job was to remove the punchbowl when the party gets going. Judging by his recent...

Ever Wondered What Donald Trump Would’ve Looked Like in Ancient Greece?

News - December 2, 2022 0
An artificial intelligence app that visualizes how you may have looked in ancient Egypt, as a punk rocker, or a wild west fugitive has...
© 2022 Venture Current is a Flag Media LLC Publication. All Rights Reserved.
VC is part of the FLAG Token rewards network. Clients and partners can use FLAG Tokens for VC products and services.
VC runs 'Automatic' software. Stories posted here come from generic-topic Google news RSS feeds as well as client and partner-approved content.
If a story appears on this page that needs to be deleted due to licensing issues, please message us immediately so we can help you.