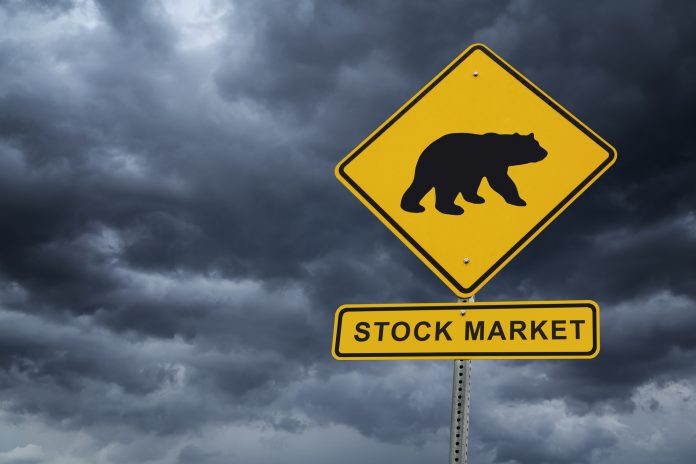 It might seem as if everybody and their brother these days is predicting a recession. Several big banks warned about the potential for an economic slowdown in their latest quarterly updates. A World Economics Survey found that 63% of economists expect a recession this year.

These gloomy perspectives could indicate that the stock market is in for another big downturn. But is a bear market inevitable if there’s a recession in 2023? Here’s what history shows.

It makes sense that stocks would fall during a recession. After all, there are real underlying businesses behind every stock. Those businesses have a harder time generating earnings growth when the economy is faltering. And ultimately, earnings growth is what drives stock prices.

This conventional wisdom typically manifests itself. There have been three U.S. recessions so far in the 21st century. In each case, the S&P 500 fell at least 20% — the threshold for declaring a bear market. 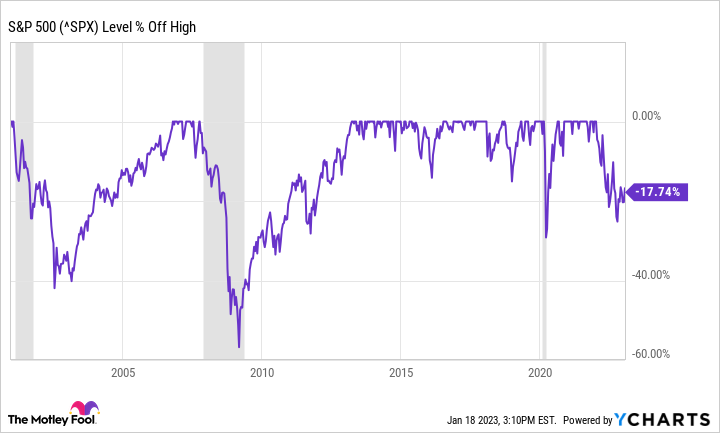 As you might expect, this phenomenon isn’t new. The stock market entered a steep bear market during the Great Depression. After a rebound, stocks again plunged into bear market territory in 1937.

This pattern repeated itself multiple times through the following decades. The 1970s were an especially difficult time. The S&P 500 sank more than 20% during the recession that ended in November 1970. In 1973 and 1974, an Arab oil embargo caused an even worse decline.

Quite a few exceptions

However, recessions haven’t always led to bear markets in the past. Since 1950, the U.S. economy has gone through 11 recessions. The S&P 500 didn’t enter a bear market in four of them.

In the early 1950s, the Federal Reserve took action to control high inflation. The U.S. economy officially entered a recession in 1953. While the S&P 500 initially fell, it never reached bear market territory. Stocks began to rebound relatively early during that recession. The S&P 500 even ended it with a solid gain. 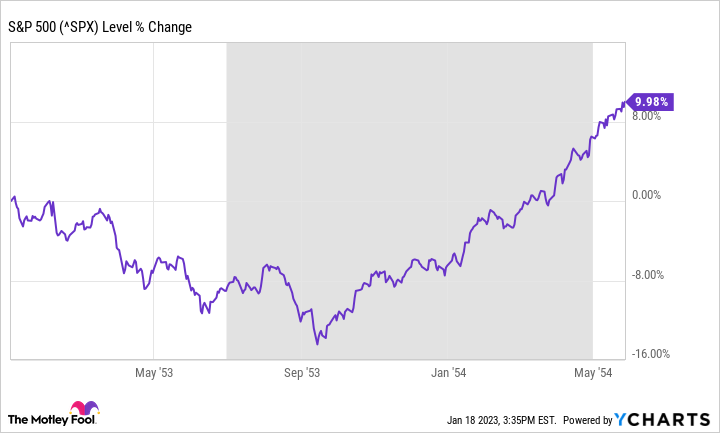 A somewhat similar story occurred in the following decade. The Fed began raising interest rates in 1959. By April 1960, the U.S. was in a recession. But a bear market didn’t materialize for the S&P 500. The index started to rebound well before the end of the short recession. 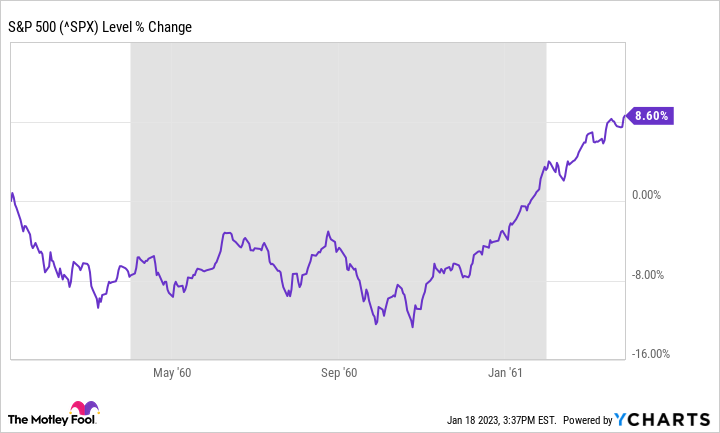 In 1980, the U.S. economy yet again slipped into recession as a result of aggressive Fed interest-rate hikes. This time, though, the S&P 500 never even approached bear market territory. By the end of the short-lived recession, the index was higher than it was before the recession began. 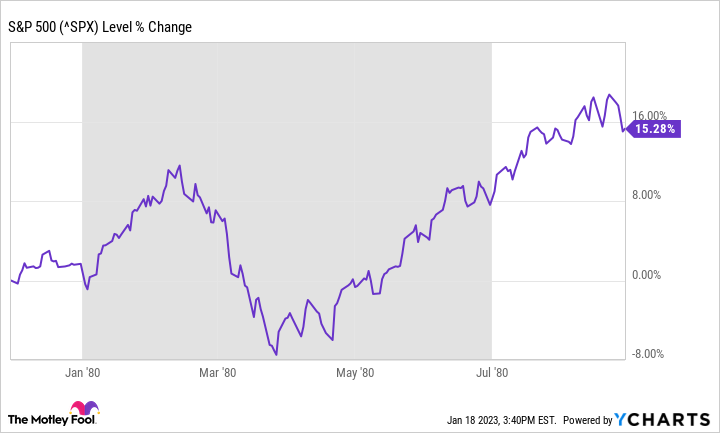 1990 brought a different verse to the same song. The Fed raised interest rates to control inflation. A recession followed. However, once again, the S&P 500’s decline wasn’t enough to call a bear market. 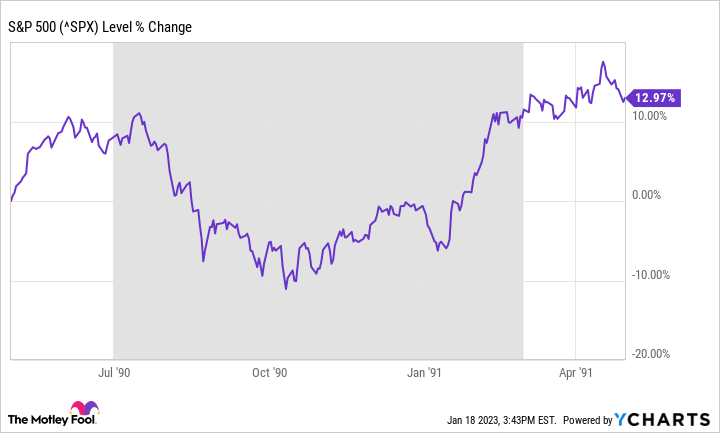 Inevitable? No, and no.

So is a bear market inevitable if we have a recession in 2023? No, not based on historical precedent. It’s quite possible that all of the fears about a recession are already fully baked into stock prices.

Importantly, though, a recession isn’t inevitable, either. White House economist Jared Bernstein stated in an interview last month with Yahoo! Finance, “I think there are reasons to be optimistic that the path to a steady and stable transition is plausible and credible.”

Granted, Bernstein’s ties to the Biden administration give him a reason to spin things positively. But there are other economists without White House connections who don’t think that a recession is necessarily on the way.

The best thing that investors can do is to be prepared for any outcome. Buying practically recession-proof stocks can help insulate your portfolio from any major declines. Investing in stocks and exchange-traded funds (ETFs) — especially low-cost index funds — on a regular basis (such as monthly) is another good strategy. If you have a long-term perspective, even recessions and bear markets can provide great opportunities to make money.

News - December 3, 2021 0
Google Photos’ Locked Folder feature, which promises to keep sensitive photos out of your main photo roll, is starting to roll out...

A Takeover of Peloton Still Isn’t a Sure Thing

News - January 28, 2023 0
The latest in extreme weather trends brought a deep freeze to parts of Asia and the northern hemisphere, while the UK weather agency forecast...

News - January 28, 2023 0
Hey, party people, it’s Kyle, continuing to step in for Greg to write Week in Review as he spends time with his newborn. Dunno...
© 2022 Venture Current is a Flag Media LLC Publication. All Rights Reserved.
VC is part of the FLAG Token rewards network. Clients and partners can use FLAG Tokens for VC products and services.
VC runs 'Automatic' software. Stories posted here come from generic-topic Google news RSS feeds as well as client and partner-approved content.
If a story appears on this page that needs to be deleted due to licensing issues, please message us immediately so we can help you.