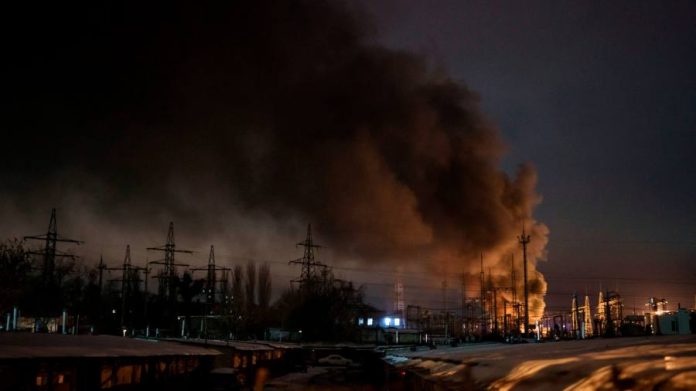 On New Year’s eve, Andrii Touinda looked out of the window of his Kyiv apartment at the Russian cruise missiles flying overhead and wondered if he would have to spend another night repairing damaged electricity stations to keep the Ukrainian capital’s lights and heating on.

“I’ve got all my team ready at the other end of my phone, they are Marvel superheroes,” said the maintenance engineer at DTEK, Ukraine’s biggest private energy company. “It’s our job to bring light to people, doing the impossible.”

For the past three months, since Ukrainian counteroffensives pushed back Russia’s ground forces in the north-east and south, Moscow has opened a deadly second front: relentless volleys of cruise missiles and drones that aim to destroy Ukraine’s electricity grid and plunge millions of civilians into freezing winter darkness.

General Valery Zaluzhnyi, commander of Ukraine’s armed forces, warned in an interview with The Economist in December that destruction of the power grid could erode public morale and Ukraine’s ability to keep fighting. One intense wave of air strikes on November 23, when Russia dispatched 70 cruise missiles, even led to rolling blackouts in neighbouring Moldova, which is connected to Ukraine’s grid.

“The attacks are planned and implemented not only by the Russian military but also by Russian energy specialists,” said Volodymyr Kudrytskiy, chief executive of Ukrenegro, Ukraine’s state-owned power company.

Russian engineers knew Ukraine’s energy grid “like the back of their hands” because it was connected to their country’s system prior to last February’s invasion, Kudrytskiy said. But Ukrainian engineers now better understood the Russian strategy and could take measures “aimed at minimising the consequences” of the attacks, he added.

Ukrainian officials say Russia has pursued a systematic campaign, focused on destroying the transformers that sit at key nodes of the electricity grid’s distribution system, rather than power plants themselves.

The aim was to break-up the grid into isolated islands and prevent power from flowing between regions, energy experts said. Much of the country’s power generating capacity is in the west and travels through high-voltage lines to reach the centre and east.

“All the equipment is located in the open air, so it’s quite easy to hit,” said Maxim Timchenko, DTEK’s chief executive. “If there is a direct hit, there is no chance the equipment can be saved.”

Keeping the system going as winter sets in has become a race against time for Ukraine and its western allies. The first step was to protect 50 crucial sites with western-supplied air defence systems, such as Nasams surface-to-air-missiles.

The strategy is a trade-off, as the resources could otherwise be deployed to protect troops on the frontline. Older second world war-style approaches, such as using machine guns to shoot down drones picked out in the night sky with spotlights, have therefore also been used. “It is a simple defence system but it can be effective against slow-flying drones,” one Ukrainian defence adviser said.

The second prong of Ukraine’s strategy is anticipating the attacks and learning from those that succeed. Industry executives hold daily Zoom meetings with the energy ministry and other government counterparts to keep abreast of the fast-moving conflict.

To reduce the system’s vulnerability, the up-to 60 minute grace period provided by Ukraine’s warning systems are used to power down the system with temporary blackouts, Timchenko said. If any missiles get through, “we adjust the system and air defences . . . so that we are more protected”.

The third dimension is repair. Much of Ukraine’s grid uses the old Soviet system. This operates at higher voltages than the EU’s, making it incompatible with much western equipment, which cannot then be used to replace damaged gear.

The shortages are most severe with 750 kV transformers, which weigh up to 200 tonnes each. Although some replacements have been sourced from formerly communist countries such as Lithuania, most of those destroyed have to be rebuilt.

“For the first eight months of the war, Ukraine didn’t suffer so much as we had a big stock of [spare] transformers,” Kudrytskiy said. “Now they are a crucial need.”

More than 40 per cent of the country’s energy infrastructure has been damaged in the Russian attacks. But despite blackouts, Ukraine’s engineers have proven highly skilled at shunting power around disabled parts of the grid.

At night, those Kyiv restaurants that remain open throw pools of light across dark streets. Some industrial users in the centre of the country such as iron ore producer Ferrexpo, have even partially restarted production.

“I’ve been uber impressed at how the country has been able to keep the system running,” Denys Sakva, energy analyst at Kyiv-based Dragon Capital, an investment management company, said.

However, after a mild December, temperatures are dropping sharply. On Friday, Ukrenegro appealed to civilians to save electricity. With three months to go until winter officially ends on April 1, the government has said emergency blackouts may be reinstated.

“The electricity grid is like a body: everything is interconnected and if one part is damaged that is felt everywhere,” Touinda said. “I am not afraid, but its getting harder to deal with all the damage.”

Five minutes with the makers of ‘The Peripheral’

TPG’s forthcoming Wall Street debut was decades in the making

News - January 2, 2023 0
Italy is the eurozone country most susceptible to a debt crisis as the European Central Bank raises interest rates and buys fewer bonds in...

News - July 1, 2022 0
Kohl’s Corp. will continue as its own company after ending its negotiations with potential buyer Franchise Group Inc. Find out the details and what...

News - September 17, 2022 0
Two opposing views by Wall Street gurus will only add to investors’ angst as the market ends the week deep in the red....
© 2022 Venture Current is a Flag Media LLC Publication. All Rights Reserved.
VC is part of the FLAG Token rewards network. Clients and partners can use FLAG Tokens for VC products and services.
VC runs 'Automatic' software. Stories posted here come from generic-topic Google news RSS feeds as well as client and partner-approved content.
If a story appears on this page that needs to be deleted due to licensing issues, please message us immediately so we can help you.