In Jack Ma’s home town of Hangzhou, the Alibaba founder’s expansive home boasts its own food supply within a national wetland park. But the compound is just one of his extensive land holdings in the city.

“His nickname is ‘half of the city Ma’,” said a retired government official in the city of 10m who worked with Alibaba for more than decade. He noted that Ma’s holdings were partly purchased and partly received as gifts from the government following donations.

For years the excess of China’s tycoons has been legend. From Hong Kong’s Victoria Peak to London’s Kensington Palace Gardens and New York’s Upper East Side, they snatched up the world’s most expensive properties. Many have collected an array of prestigious acquisitions from English football clubs and Bordeaux vineyards to Hollywood studios and international newspapers.

Now Ma and his clique of billionaire tech titans are on an urgent mission to display their socialist spirit through a spree of public charitable donations and pledges.

A sudden burst of benevolence has seen billions of dollars redirected from company coffers and personal bank accounts to state-linked causes over recent months, as the country’s richest and most powerful corporate elites try to appease Xi Jinping, the Chinese president.

However, inside China’s growing philanthropy sector, the donation drive has been met with scepticism as fears of tightening state control mount.

The deluge of generosity follows a barrage of tech-focused regulatory and policy curbs from Beijing, a broad crackdown that has knocked tens of billions of dollars off the value of some of the country’s biggest businesses and hammered the personal wealth of their founders.

“The scary part [for donors] is that they don’t know how much is enough,” said the executive of a big Beijing charity. “All they can do is look at how much their peers have given and try to match it.”

The Chinese Communist party’s focus on wealth redistribution intensified this month after Xi called for stronger regulation of “excessively high incomes” and moves to “encourage high-income groups and enterprises to return more to society”.

The Chinese leader, whose comments were carried by state media after a high-level economic planning meeting last week, also reiterated that China’s realisation of “common prosperity” was the essential requirement of socialism.

Days after Xi’s comments were published last week, Tencent, one of China’s biggest social media, gaming and fintech groups, announced it would set aside Rmb50bn ($7.7bn) for a “common prosperity programme”.

In the wake of the deadly Henan floods last month, a clutch of tech groups including Alibaba, ride-hailing group Didi, Tencent and Pinduoduo all donated tens of millions of dollars to recovery efforts.

Over the past 10 years the amount of cash donated annually by China’s top 10 entrepreneurs rose nearly threefold, according to data from the Hurun Research Institute, a China-based research group. Bloomberg-compiled data suggests that Chinese billionaires’ giving this year is already 20 per cent higher than all of 2020.

Now, however, pressure appears to be increasing on companies and tycoons to shift their charitable activities in-step with the Chinese Communist party, a change that experts said threatened to undermine their good intentions.

According to one senior Chinese financial executive, while officials have long encouraged charitable giving — often referred to as the third or “tertiary” distribution of income — it was now at the forefront of the party’s policy agenda.

“Tertiary distribution has been referred to in government documents for 30 years,” said the executive, who asked not to be named. “But until last week nobody read those documents. Now everybody is reading every word.”

The executive added that his own company was expanding its charitable activities: “It’s the right thing to do. We created all this wealth thanks to the China market. It’s only fair for us to contribute to society as well.”

The Beijing charity executive said that since China’s revamped charity laws took effect five years ago, non-governmental organisations have fallen under “heavy scrutiny” as authorities sought to curb the runaway growth of private sector groups that were perceived as eroding party control. 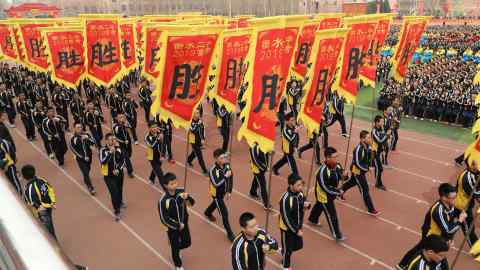 Instead, the donations are set to benefit state-linked initiatives at the expense of grassroots groups.

“It is very difficult to gain approval to set up new private charity groups. For example, there wasn’t a single newly approved NGO in Haidian last year,” he said, referring to one of Beijing’s most developed districts.

Scott Kennedy, an expert on Chinese economic policy at the Center for Strategic and International Studies, a US think-tank, noted that many of China’s top executives have established reputations for their individual philanthropy, especially after Alibaba’s Ma led a wave of entrepreneurs to create private trusts.

“That’s consistent with the broader trend under Xi Jinping of reducing the influence of civil society. The party is extremely uncomfortable with independent public behaviour that provides public goods or holds the state accountable,” he said.

“But at the end of the day, the party’s primary goal is trying to assert its dominance and control over all aspects of life in China.”

News - April 6, 2022 0
Crypto firms are rushing to set up shop in Dubai after it started to offer virtual asset licences, making the Gulf state the latest...

News - August 18, 2022 0
Earnings at Chinese property developer Country Garden fell as much as 70 per cent in the first half of the year, as the country’s...

News - November 2, 2021 0
"Am I worried about an armed conflict or something happening accidentally with China? No, I'm not," Biden told CNN's Phil Mattingly while speaking at...
© 2022 Venture Current is a Flag Media LLC Publication. All Rights Reserved.
VC is part of the FLAG Token rewards network. Clients and partners can use FLAG Tokens for VC products and services.
VC runs 'Automatic' software. Stories posted here come from generic-topic Google news RSS feeds as well as client and partner-approved content.
If a story appears on this page that needs to be deleted due to licensing issues, please message us immediately so we can help you.