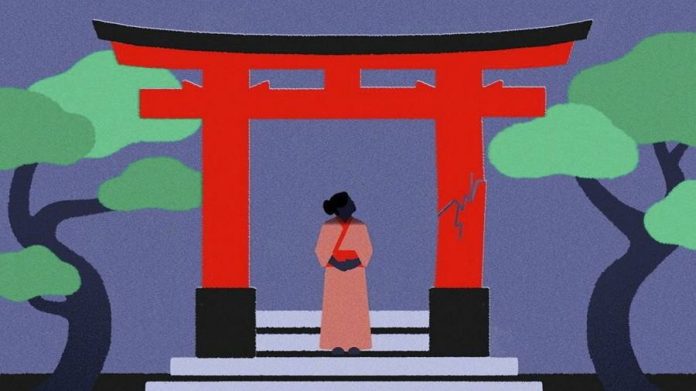 A place on Santa’s naughty list. Abduction and worse by Black Annis, El Cuco, and other folklore ghouls. An eternity of torture in the fires of hell.

Childhood misbehaviour is universal, and so is the parental urge to conjure up a consequence fearsome enough to stop it. But how far should that go and how far is all of it protected by freedom of religion?

The sudden questioning of the legal limits of invisible terror has pitched Japan more deeply than it perhaps intended into a debate about faith, imagination and coercion.

The issue is among the still-raw collection of legislative and political ramifications of the assassination last July of the former prime minister, Shinzo Abe. Under any circumstances Abe’s murder — the gunning-down of the country’s longest-serving leader in front of TV cameras, campaign crowds and bodyguards — would have reverberated powerfully.

But the subsequent allegations that the killer was motivated by a need for revenge against the Unification Church, or “Moonies” and its connections with Abe’s ruling Liberal Democratic party, ensured even greater repercussions and a rush to react. The killer claimed his mother had been bankrupted by her outsized donations to the church, and the family condemned to generational penury.

As public shock at the killing morphed rapidly into revulsion at the tolerated excesses of coercive fundraising and the revealed extent of the Unification Church’s connections with senior leadership of the LDP, prime minister Fumio Kishida moved quickly. Within months, as more victims came forward with stories of financial ruin, new legislation was bustled through parliament.

The new law, passed after a brisk debate in mid-December, took effect last Thursday and is intended both to allow victims to recoup money from religious organisations and to restrict various practices such as insisting that followers take out loans or sell property to fund donations. In particular, the law seeks to codify whether donors are under “mind control” at the point of donation and to clamp down on the excesses of “spiritual sales” — religious items presented as indispensable and sold for exorbitant sums.

But there are other prongs to the government’s attack. The deadline has just passed for the Unification Church to respond to a second round of government questions over how the organisation runs its finances, based on a large number of civil court rulings that found it had acted illegally in fundraising operations. Ultimately, the inquiry could see the Unification Church stripped of its tax-efficient status as a religious corporation.

A more intriguing corollary of the affair arose at the very end of last month when the welfare ministry sent a new set of guidelines to local governments around the country clarifying where religious doctrine could be justifying child abuse. It urged them not to use freedom of religion arguments to look the other way.

Using religious threats to forbid a child from reading manga comics or playing video games, under the new guidelines, could be considered psychological abuse. Critically, that could also now include a parent warning their child that they will go to hell (or similar) if they do not do as instructed. Various faiths will argue that parents have the right to warn their children of any unprovable threat — from the agonising torments of Naraka, the Buddhist version of hell, to navel-stealing ogres — in which they themselves believe. And even if they do not.

Clearly, the new legislation, inquiry and guidelines have the Unification Church squarely in their sights. The tone throughout has been that it represents a specific concentration of alleged coercion, brainwashing and financial sharp practice, and that there are straightforward ways of breaking that down.

However well-intentioned the project, the risk has always been that in its rush to enact something, Japan has skipped some extraordinarily nuanced theological questions and created potential trouble for a much larger circle of organisations and activities than it has bargained for.

If these troubles come to include, however obliquely, Japan’s mainstay religions of Shinto and Buddhism, and even the substantial Christian presence here, the political backlash could be more severe than the one it was meant to head-off. The concept of fair value, for example, in the sale of any spiritual goods — from the lucky wooden arrows sold on New Year’s Day to the Omamori charms used to ward off car accidents — is meaningless if their worth to the buyer lies in the blessing placed on them. Nobody is suggesting that sales of arrows and charms are coercive, but nobody wants, either, to start questioning how the priests at Tokyo’s Meiji Shrine calculate the mark-up.

Luxury boom shows the staying power of the ultra-rich

News - January 23, 2023 0
We may be heading for a global recession, but there’s one group of people who can’t seem to stop spending — the world’s richest....

News - December 27, 2022 0
The U.S. Department of Transportation said it will look into flight cancellations by Southwest Airlines that have left travelers stranded at airports across the...

News - February 28, 2022 0
(Kitco News) As the West steps up sanctions against Russia in the aftermath of a full-scale invasion of Ukraine, Goldman...

News - January 23, 2023 0
Are you enjoying the start of the new lunar calendar year? The Year of the Rabbit is supposed to represent hope, peace and prosperity....

News - October 16, 2022 0
New Jersey, United States – “Global Personal Finance Software Market Insight, Forecast 2028” is recently published by verified Market Research. The analysts and researchers have...
© 2022 Venture Current is a Flag Media LLC Publication. All Rights Reserved.
VC is part of the FLAG Token rewards network. Clients and partners can use FLAG Tokens for VC products and services.
VC runs 'Automatic' software. Stories posted here come from generic-topic Google news RSS feeds as well as client and partner-approved content.
If a story appears on this page that needs to be deleted due to licensing issues, please message us immediately so we can help you.