Joe Biden’s historic cancellation of billions of dollars in student loan debt, a move long-awaited by progressives, has come at a precarious moment for the US economy.

“This means people are going to start to finally crawl out from under that mountain of debt . . . to finally think about buying a home or starting a family or starting a business,” the US president told reporters at the White House on Wednesday. “And by the way, when this happens, the whole economy is better off.”

While those words delighted those waiting for him to fulfil his campaign pledge to help borrowers drowning in student debt, they also worried some economists who believe that with consumer price inflation at a 40-year high, this is the worst time to give it further fuel.

“This is going to worsen inflation and it is going to eat up all the deflationary impact of the Inflation Reduction Act,” said Marc Goldwein, senior policy director at the hawkish Committee for a Responsible Federal Budget.

Republicans were similarly scathing, with Mitch McConnell, the party’s leader in the Senate, calling the move “student loan socialism”.

Even some on the left worry that putting thousands of dollars back into the pockets of millions of Americans will further stoke demand and help push prices even higher.

“Pouring roughly half [a] trillion dollars of gasoline on the inflationary fire that is already burning is reckless,” Jason Furman, who was chair of Barack Obama’s council of economic advisers, tweeted.

Wednesday’s announcement follows months of pressure on Biden to do something about the US’s soaring levels of student debt. Since 1980, the cost of a four-year university degree has nearly tripled in real terms, according to The College Board.

Donald Trump first instituted a freeze on payments for federal student loans at the start of the coronavirus pandemic, which has since been extended multiple times. Biden said on Wednesday that repayments would be paused for an extra four months and that when they restart, everyone earning less than $125,000 will be forgiven $10,000.

Those in receipt of Pell Grants, which are given to those in particular financial need, will get an extra $10,000 in debt forgiveness. Borrowers who have original loan balances of $12,000 or less will have the outstanding amount completely forgiven after 10 years, rather than 20.

After repayments resume, they will be capped at 5 per cent of income, and no one earning 225 per cent of the poverty level — roughly equivalent to earning the minimum wage — will have to make repayments.

According to the White House, 43mn borrowers will have their payments reduced, and 20mn of those will have their balance wiped out entirely. US consumers hold roughly $1.6tn in outstanding student debt, with black households typically bearing more debt and facing higher repayments.

Roughly 16 per cent of borrowers are in default, while two-thirds of black borrowers owed more in 2016 than they did in 2004, according to a study by the leftwing Center for American Progress.

“The Biden administration’s policy is going to be transformative for the lives of borrowers,” said Charlie Eaton, associate professor of sociology at the University of California, Merced.

Cancelling debt is not wholly progressive, given the poorest members of society are less likely to have gone to university.

An analysis by the Penn Wharton Budget Model found that cancelling $10,000 of debt for those earning under $125,000 a year would help the top 60 per cent of earners more than the bottom 40 per cent, and those in the middle the most. However, the additional actions such as increasing the amount of forgiveness for Pell Grant holders and capping repayments, will help tilt the benefit back towards lower earners.

Susan Rice, director of Biden’s domestic policy council, told reporters: “Targeting this relief to those who need it the most means that 90 per cent of the relief dollars will go to those individuals earning less than $75,000 a year, and no individual or couple in the top 5 per cent of incomes in the United States will receive a penny of relief.”

Others point out that it is more progressive in terms of wealth and race, however. A paper by Eaton for the Roosevelt Institute found that the people in the second-poorest quintile were helped most by student debt cancellation when calculated by assets rather than income. It particularly helps black borrowers, many of whom have to pay higher interest rates because they had fewer assets to borrow against in the first place.

Goldwein at the Committee for a Responsible Federal Budget calculates the package could end up costing $500bn. And he pointed out that forgiving student debt could make university tuition more expensive in the long run.

“If colleges know that debt has been forgiven in the past and might be again in the future, they will be under less pressure to bring down tuition fees,” he said.

The administration’s supporters believe any short-term inflationary fallout will be minimal given that the effect for most borrowers will be spread out over years’ worth of reduced payments, rather than all at once. 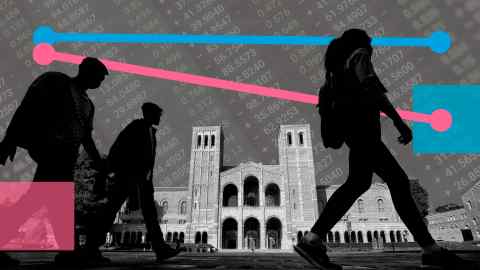 Some progressives want Biden to do even more to bring down the cost of tuition, with Bernie Sanders, the liberal senator from Vermont, leading calls to eliminate fees altogether for low- and middle-income households.

“Pausing repayments until the end of the year will have a fiscal impact of $20bn-$40bn, and the future impact of forgiveness will be less than that,” said Kent Smetters, professor of public policy at Penn Wharton. “Compared to the size of the economy, that would not even show up.”

Eaton added: “When debts are cancelled people are able to do things that were not previously possible.

Here’s why the IPO market is decelerating in 2022

News - September 9, 2022 0
A man wearing a protective mask, amid the coronavirus disease (COVID-19) outbreak, walks past an electronic board displaying graphs (top) of Nikkei index outside...

News - January 8, 2022 0
Prime Minister Abiy Ahmed says the prisoners have been released in a bid to promote reconciliation. Source

Stocks Today Tank Broadly; How Far Could Indexes Fall In An Attack On Ukraine?

News - February 11, 2022 0
Nearly 24 years ago, events in Russia pounded stock markets worldwide. After the government defaulted on its bonds and let the ruble slide, Reuters...
© 2021 Flag Media Group. All Rights Reserved. ** TELL YOUR STORY **
We do not generate news. This digital publication and all Flag Media publications curate Google news using Google RSS Feeds.
Please advise if any posts need to be removed for licensing/copyright issues.