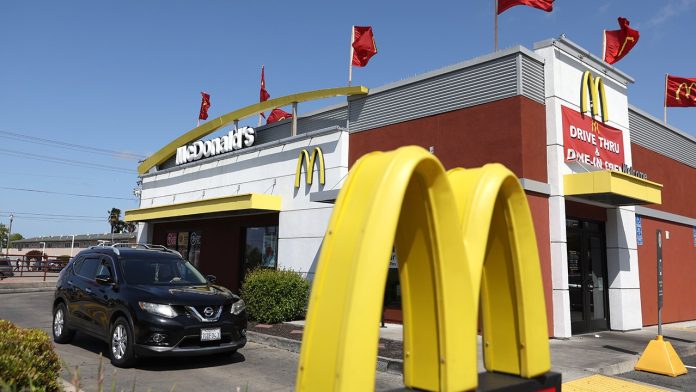 Check out what’s clicking on FoxBusiness.com

A judge of the Sacramento Superior Court ruled Friday to block a proposed law in California that would give the state authority to negotiate the wages and working conditions of fast-food workers.

The block is dependent on the outcome of a proposed referendum pushed by fast-food giants to stomp out the proposed changes.

The Fast Food Accountability and Standards Recovery Act (“FAST”) has seen significant pushback from restaurateurs and franchisees as workers’ unions fight to give the state a seat at the table in negotiating wages.

A sign is posted in front of a McDonald’s restaurant on April 28, 2022, in San Leandro, California.  (Justin Sullivan/Getty Images / Getty Images)

The law would establish a 10-member council capable of setting minimum wages and parameters for work hours at fast-food restaurants within the state.

Restaurant industry interest groups are seeking a November 2024 referendum to kill the legislation.

Election officials have not yet finished counting the signatures on the referendum proposal, but if a sufficient amount are counted, the court’s ruling will halt the law from taking effect until Californians can weigh in.

California’s Department of Industrial Relations will begin setting the law into motion on Sunday pending a successful reform petition. However, concrete negotiation of wages will likely not begin until late next year.

The Service Employees International Union was a key champion of the legislation.

GET FOX BUSINESS ON THE GO BY CLICKING HERE

The union has accused McDonald’s, Chipotle and other chains by name as disregarding workers’ well-being for the sake of business considerations.

European stocks climb as investors gear up for US inflation data

News - December 13, 2022 0
European stocks were higher on Tuesday ahead of the eagerly anticipated release of November’s US consumer price figures, with investors hoping the data would...

Global VC investing almost doubled to $643 billion — over half a trillion dollars...

I beg you, enable multiplayer in Deathloop and embrace mortality

News - September 23, 2021 0
The dastardly multiplayer invasions of Deathloop are some murderous hijinks. But not everybody wants...

News - March 15, 2022 0
BEIJING: On Tuesday, oil prices fell to a two-week low following continued ceasefire talks between Russia and Ukraine and concerns about demand in China...
© 2022 Venture Current is a Flag Media LLC Publication. All Rights Reserved.
VC is part of the FLAG Token rewards network. Clients and partners can use FLAG Tokens for VC products and services.
VC runs 'Automatic' software. Stories posted here come from generic-topic Google news RSS feeds as well as client and partner-approved content.
If a story appears on this page that needs to be deleted due to licensing issues, please message us immediately so we can help you.