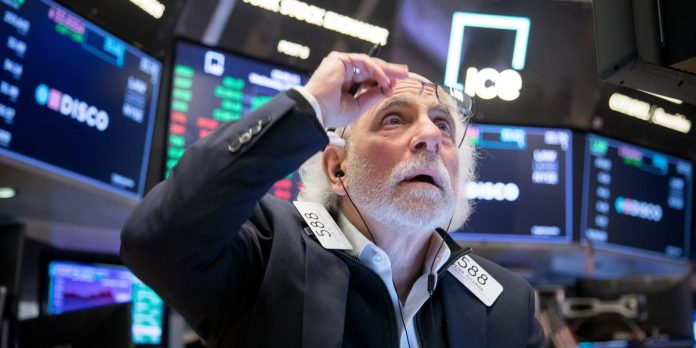 The S&P 500’s 20% decline in 2022 could mostly be attributed to just a handful of big down days, according to DataTrek Research.

In fact, just five days are responsible for 94% of the index’s losses this year. Those days saw markets fall as much as 4.3% and center around inflation concerns, big corporate earnings misses, and reactions to the Federal Reserve’s monetary tightening decisions. And these down days could shed some light on how the stock market in 2023.

“This framework of ‘a handful of days make the year’ is also a good one with which to consider 2023,” DataTrek said.

These were the five trading days that tanked the market in 2022, according to DataTrek co-founder Nicholas Colas.

The stock market had its worst day of the year after the August consumer price index report showed inflation running hotter than expected, at 8.3% year-over-year compared to expectations of 8.0%.

A big earnings miss from Target highlighted shifts in consumer spending patterns, supply chain issues, and rising input costs. This was just one day after Walmart warned investors about the same issues. Target closed down 25% that day.

The May CPI report showed inflation running hotter than expected, at 8.6% year-over-year compared to expectations of 8.3%. This day threw the S&P 500 into bear market territory for the first time in 2022, with the index down 21.8% from its January 3 highs.

A big first-quarter earnings miss from Amazon, combined with reduced guidance, sent the market reeling and pushed Amazon stock down 14%, its worst one-day decline since 2006. The sell-off sent other mega-cap tech stocks spiraling downwards as well.

The stock market reversed sharply lower, giving back the prior day’s massive gain that was sparked by Fed Chair Jerome Powell’s remark that policymakers weren’t considering interest rate hikes of more than 50 basis points. The Fed would go on to raise interest rates by 75 basis points just six weeks later as inflation was still running hot.

According to Colas, the themes that drove the bulk of the downside in 2022 will be present in 2023 too, though they could instead drive upside if the Fed stops hiking interest rates and inflation continues to cool off.

“At some point next year, equity markets should have some outsized up days as investors conclude that the Fed is done raising rates. The potential offset will be how many down days come as a result of disappointing corporate earnings or geopolitical tensions,” he said.

The sparring between big up and down days next year means investors might not have a clue about whether 2023 will end in the green or the red until late next year.

But what’s important to investors is that there are ultimately more up days than down days, something that didn’t happen this year. Instead, there were 34 more down days this year in the S&P 500 than up days. And that’s what drives losses.

“It is impossible to know ahead of time which days will ‘make the year’ in either up or down markets. History only tells us that, over time, there are more green days than red ones and that’s enough to tip the scales in favor of owning equities,” Colas concluded.

News - October 20, 2021 0
An In-N-Out located in San Francisco was temporarily shut down because it wouldn’t comply with the city’s mandate to check people’s coronavirus vaccine status. The...

News - October 1, 2021 0
MOSCOW — Mikheil Saakashvili, a former president of Georgia and once a prominent figure in the politics of post-Soviet countries, was arrested on Friday...

Biden administration on avoiding combat with Russia: ‘There’s no such thing as no-fly zone...

News - October 14, 2022 0
What a whirlwind of a few days in the stock market. On Thursday, a hotter-than-expected CPI report initially sent the S&P 500 down to...
© 2022 Venture Current is a Flag Media LLC Publication. All Rights Reserved.
VC is part of the FLAG Token rewards network. Clients and partners can use FLAG Tokens for VC products and services.
VC runs 'Automatic' software. Stories posted here come from generic-topic Google news RSS feeds as well as client and partner-approved content.
If a story appears on this page that needs to be deleted due to licensing issues, please message us immediately so we can help you.