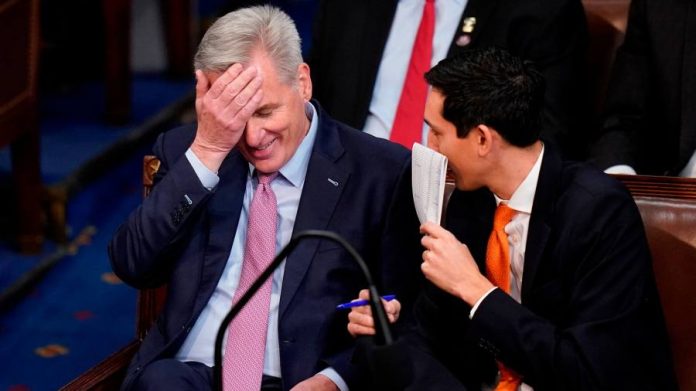 Republican Kevin McCarthy convinced a large number of party rebels to fall in line behind his bid to serve as Speaker of the House of Representatives on Friday, but still fell just short of clinching the position in a historic 13th ballot.

The momentum in favour of McCarthy came as the race for the leadership of the lower chamber of Congress entered a fourth consecutive day. It remained unclear whether the California congressman can win over the handful of remaining hardliners.

McCarthy has offered several rounds of concessions to his critics, including rule changes that would make it easier to call for a vote of no confidence in a future Speaker, and promises of plum committee assignments for members of the ultra-conservative House Freedom Caucus.

Those efforts appeared to have swayed more than half of the 20 Republicans who had opposed his speakership in previous rounds, including Dan Bishop of North Carolina and Byron Donalds of Florida. The hope for McCarthy and his allies will be that the improvement in his numbers will pile pressure on the rest of the holdouts to back his bid.

One previous holdout who flipped to support McCarthy in the 12th vote, Scott Perry of Pennsylvania, tweeted after the ballot: “We’re at a turning point. I’ve negotiated in good faith, with one purpose: to restore the People’s House back to its rightful owners. The framework for an agreement is in place, so in a good-faith effort, I voted to restore the People’s House by voting for McCarthy.”

But resistance from seven members of his own party remained steadfast and defiant — enough to scupper his chances of winning the gavel in the House in the first round of voting on Friday.

Bob Good, a Virginia Republican who has been among the dissidents, said before the vote he would not support McCarthy “at any time”.

“The whole reality is he does not have 218, he’s not going to have 218, and the sooner that he surrenders to that reality, the sooner we can move forward as a conference and begin to debate, vet and assess . . . [alternative] candidates,” he said.

Good said he would like to see Jim Jordan, the Ohio Republican, as Speaker, but suggested that other members should propose Steve Scalise, the Louisiana Republican and a member of the House Republican leadership, as a possible candidate. “There are members who are in support of him, I think they should put his name forward, nominate him, and vote for him.”

Even though McCarthy had made big concessions in recent days, there remained a significant lack of “trust” in his willingness to follow through with them, Good said. “He doesn’t believe in any of the things he’s agreeing to do so he would be doing them only under compulsion because he’s desperate.”

The last time it took more than one round of voting to select a Speaker was 1923, when it took nine ballots. If the stalemate is not broken the process could continue through the weekend. The House is constitutionally required to select a Speaker, and cannot move on to any legislative business until someone is handed the gavel. The Republican infighting has exposed long-simmering tensions in a party that is grappling with how to move forward after a relatively disappointing performance in November’s midterm elections.

McCarthy finds himself in a difficult position in part because the “red wave” he and others predicted did not materialise, and Republicans now control the House by a razor-thin margin.

The gridlock in the House has also raised questions about how Congress will function for the next two years, and whether McCarthy or any other Speaker will be able to wrangle the party’s warring factions to pass any legislation.

One looming threat is the possibility of a debt ceiling crisis later this year. Economists have forecast that the US economy risks default in the third quarter if lawmakers do not agree to raise the limit on government borrowing.

News - April 16, 2022 0
Welcome to Startups Weekly, a fresh human-first take on this week’s startup news and trends. To get this in your inbox, subscribe here. I’ve been...

News - December 29, 2021 0
France’s government is forging ahead with efforts to increase pressure on unvaccinated people to get coronavirus shots, as the country reported 208,000 new COVID-19...

50 years after Nixon visit, US-China ties as fraught as ever

News - February 21, 2022 0
“The U.S.-China relationship has always been contentious but one of necessity,” said Oriana Skylar Mastro, a China expert at Stanford University. “Perhaps 50 years...

News - December 28, 2021 0
Russia’s Supreme Court on Tuesday ordered the closure of Memorial, the country’s oldest civil rights group, after prosecutors accused the organisation of failing to...

News - March 4, 2022 0
TOKYO, March 4 (Reuters) - Foreign ministers of the Group of Seven (G7) advanced economies agreed on Friday they would impose further sanctions on...
© 2022 Venture Current is a Flag Media LLC Publication. All Rights Reserved.
VC is part of the FLAG Token rewards network. Clients and partners can use FLAG Tokens for VC products and services.
VC runs 'Automatic' software. Stories posted here come from generic-topic Google news RSS feeds as well as client and partner-approved content.
If a story appears on this page that needs to be deleted due to licensing issues, please message us immediately so we can help you.