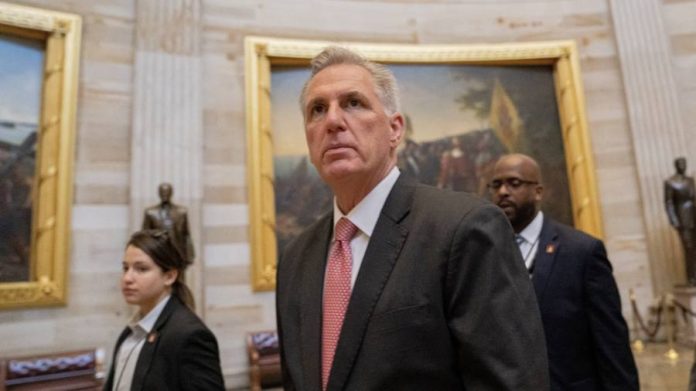 Republican congressman Kevin McCarthy has offered fresh concessions to more than a dozen members of his party, in a last-ditch attempt to quell opposition and secure the votes he needs to be elected Speaker of the House.

The climbdown comes as the House of Representatives prepares to reconvene for a third day without selecting a Speaker. The lower chamber of Congress is constitutionally required to select a Speaker and cannot move on to legislating until someone is handed the gavel.

McCarthy made history on Tuesday when he became the first majority leader in a century to fail in the first round of voting. In 1923, it took nine rounds of voting to elect a Speaker.

The House narrowly voted to adjourn late on Wednesday after six rounds of voting failed to result in a victor. The once-in-a-century gridlock has exposed long-simmering tensions in the Republican party and raised questions about whether Congress will be able to function with such dysfunction and discord.

Twenty Republican rebels have so far rejected McCarthy and rallied instead around Byron Donalds, a Republican congressman from Florida. Some of the rebels have personal grievances with McCarthy while others have demanded rule changes that would make it easier to oust the Speaker.

After months of negotiations, it appeared as though McCarthy had capitulated to those demands, agreeing to change the rules so that just one member of the House could call a vote of no confidence. But it remained unclear whether the changes would be enough to hand McCarthy the 218 votes required to win the support of a simple majority of the chamber.

Republicans took back control of the House of Representatives in November’s midterm elections. But McCarthy finds himself in such a tough position because the “red wave” he predicted did not materialise and Republicans control the chamber by a razor-thin margin, leaving him beholden to a small number of rebels.

Late on Wednesday, the Club for Growth, the ultra-low-tax group, and the Congressional Leadership Fund, a McCarthy-aligned fundraising vehicle, said they had struck a deal whereby the latter would not spend money in open Republican primaries in safe seats. The agreement was seen as a win for rightwing Republicans who have taken issue with McCarthy’s efforts to support more centrist candidates in the past.

McCarthy had received an apparent boost earlier on Wednesday when Donald Trump, the former US president, issued a full-throated endorsement of his candidacy, saying: “It’s now time for all our GREAT Republican House members to VOTE FOR KEVIN, CLOSE THE DEAL, TAKE THE VICTORY.”

But Trump’s push did little to sway the dissenters, in the last signal that his influence over the party is waning. Lauren Boebert, one of the Republican rebels, called Trump her “favourite president” but said he should be urging McCarthy to withdraw.

Some of McCarthy’s allies have also quietly called for the California congressman to step aside in favour of a consensus candidate who could unite the party’s warring factions. Many members have publicly and privately suggested Steve Scalise, a congressman from Louisiana and McCarthy’s deputy, as an alternative.

At the same time, Democratic leaders have shown little willingness to help end the stalemate, despite suggestions that Democrats could band together with a group of Republicans to back an alternative Speaker candidate. Instead, Democrats have been united in voting in favour of Hakeem Jeffries, who took over as the party’s leader in the House after Nancy Pelosi said she would step down from leadership.

News - March 6, 2022 0
What will Apple do on March 8? Even though this launch is almost upon us, we're always asking that question, sometimes literally moments after...

Apple to Also Release USB-C AirPods and Other Accessories Along with USB-C iPhone 15:...

News - May 16, 2022 0
Apple is highly speculated to finally introduce an iPhone with a USB Type-C port in 2023 and new evidence suggests that it is pretty...

News - December 21, 2022 0
CNBC Pro: Fund manager says a recession is ‘imminent’ — and names cheap stocks to play itMarket watchers are increasingly worried about a looming...
© 2022 Venture Current is a Flag Media LLC Publication. All Rights Reserved.
VC is part of the FLAG Token rewards network. Clients and partners can use FLAG Tokens for VC products and services.
VC runs 'Automatic' software. Stories posted here come from generic-topic Google news RSS feeds as well as client and partner-approved content.
If a story appears on this page that needs to be deleted due to licensing issues, please message us immediately so we can help you.