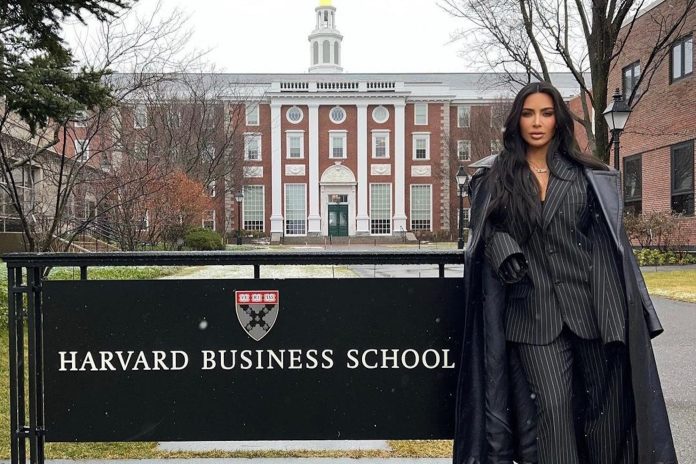 Though she might not be best known for her business acumen and entrepreneurial knowledge, it goes without saying that reality star Kim Kardashian knows a thing or two about running a successful empire.

But not everyone is sold on Kardashian being the one to dole out advice. The star faced backlash on social media over the weekend for giving a speech at Harvard Business School.

Kardashian visited HBS in Cambridge, Massachusetts on Friday with Skims co-founder Jens Grede to talk to students about the shapewear company for nearly two hours as a part of a direct-to-consumer seminar.

I spoke At Harvard Business School yesterday for a class called HBS Moving Beyond DTC. The class’s assignment was to learn about @skims, so my partner Jens and I spoke about our marketing, our challenges and our greatest wins. pic.twitter.com/42FiWDlmaj

Though cameras did follow her around campus, the seminar itself was not filmed.

Related: Kim Kardashian Says Her 20-Year Reign of Relevance Is Thanks to This One Personality Trait

Many took to Twitter to criticize Harvard’s decision to invite the 42-year-old to speak at the highly reputable institution.

“I’d hate to pay that Harvard tuition $$$$ to only get her as a speaker,” one user bluntly wrote. “Do Better, Harvard.”

Not everyone was anti-Kardashian, though. Many pointed to the success of her multiple business endeavors as grounds for credibility.

“I don’t get what the hate is about. A bunch of jealous people,” one user pointed out. “The reality is, she wasn’t born ultra wealthy. She created a company, leveraged her talents, and built a brand.”

The company is currently estimated to be worth around $3.2 billion.

Though Kardashian has quite an impressive business portfolio, the bulk of her non-endorsement-deal earnings come from majority equity stakes in Skims and her beauty line, KKW Beauty, in which she sold a 20% stake for $200 million in 2020.

Kardashian’s net worth is estimated to be $1.4 billion.

News - September 9, 2021 0
Microsoft is testing a new firmware update for Bluetooth-enabled Xbox One controllers, Xbox Elite 2, and Xbox Adaptive controllers that will grant them a...

News - March 24, 2022 0
Ukrainian and Russian armed forces on Thursday conducted the first exchange of prisoners of war since Moscow launched its invasion of Ukraine one month...

News - August 14, 2022 0
How will employee benefits startups fare when their corporate customers start slashing costs as the market goes downhill? We’re going to find out if...

News - December 28, 2021 0
Israeli Prime Minister Naftali Bennett made the announcement at a special Cabinet meeting held in the Golan Heights on Sunday. He said they will...

Russia-Ukraine war: Key things to know about the conflict

News - March 20, 2022 0
In his nightly address to the nation, Zelenskyy said Ukraine is interested in peace, and that ongoing talks with Russia are “not simple or...
© 2022 Venture Current is a Flag Media LLC Publication. All Rights Reserved.
VC is part of the FLAG Token rewards network. Clients and partners can use FLAG Tokens for VC products and services.
VC runs 'Automatic' software. Stories posted here come from generic-topic Google news RSS feeds as well as client and partner-approved content.
If a story appears on this page that needs to be deleted due to licensing issues, please message us immediately so we can help you.