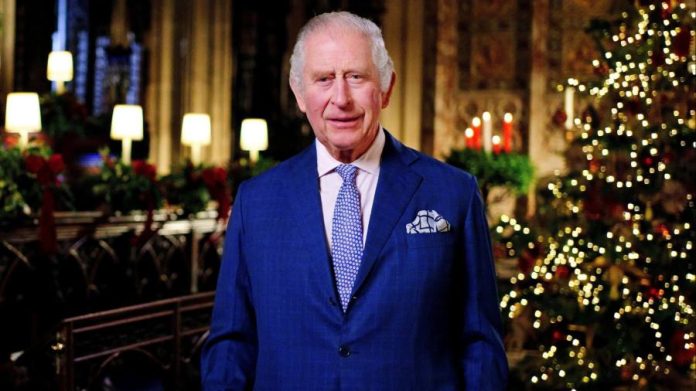 King Charles III has paid tribute to charities, community groups and public sector workers helping people “at this time of great anxiety and hardship” as the British monarch gave his first Christmas message to the nation.

He was speaking from St George’s Chapel, Windsor, where his mother Elizabeth II was buried in the autumn and where his father, the late Duke of Edinburgh — who died in 2021 — was also laid to rest.

The death of the Queen in September, at the age of 96, reverberated around the world, marking a watershed moment in the life of the nation after 70 years on the throne. She started the tradition of televised messages to the country in 1957, although her father George V made the first royal Christmas broadcast on radio in 1932 — with a script by Rudyard Kipling.

King Charles said the chapel he was speaking from was “so close to where my beloved mother, the late Queen, is laid to rest with my dear father”, adding that Christmas was a particularly poignant time for “all of us” who had lost loved ones.

“I am reminded of the deeply touching letters, cards and messages which so many of you have sent my wife and myself and I cannot thank you enough for the love and sympathy you have shown our whole family.”

The monarch said that his mother had an essential faith in God but also a “faith in people” which he entirely shared.

Dressed in a blue suit — and standing in front of a Christmas tree with plastic-free decorations — the King praised the selfless dedication of the armed forces and emergency services who worked tirelessly to keep the public safe.

“We see it in our health and social care professionals, our teachers and indeed all those working in public service, whose skill and commitment are at the heart of our communities,” he observed as a wave of strikes takes place across Britain, many involving public sector workers.

The King applauded people across the Commonwealth who were prepared to respond to the plight of others suffering from hardship, conflict, famine or natural disaster or struggling to pay their bills.

“I particularly want to pay tribute to all those wonderfully kind people who so generously give food or donations, or that most precious commodity of all, their time, to support those around them in greatest need, together with the many charitable organisations which do such extraordinary work in the most difficult circumstances,” he said.

“Our churches, synagogues, mosques, temples and gurdwaras, have once again united in feeding the hungry, providing love and support throughout the year. Such heartfelt solidarity is the most inspiring expression of loving our neighbour as our self.”

The King referred to his eldest son, Prince William, in his speech, saying that “the prince and princess of Wales” had recently made a successful public visit to Wales.

However there was no mention of Prince Harry, his second son, who has become increasingly estranged from the Royal Family and recently produced a critical Netflix series about the strained relationship.

The late Queen often recorded Christmas speeches at Windsor Castle or Buckingham Palace, but also broadcast from other locations ranging from Sandringham to the Royal Albert Hall.

News - May 31, 2022 0
Bradford, in West Yorkshire, has been announced as the UK city of culture 2025, beating bids from three other shortlisted places. Bradford saw off...

News - May 30, 2022 0
The US ambassador to Russia under President Obama slammed President Biden on Sunday for his refusal to provide Ukraine with an advanced missile system...

News - April 11, 2022 0
London’s Heathrow airport has recorded the most number of passengers since the start of the coronavirus pandemic, but UK Covid-19 infection rates have kept...

Price of bowl of tomato pasta rises 58% in UK as living standards suffer...

News - October 25, 2022 0
The price of a bowl of tomato pasta, a favourite meal among British households, has risen by nearly 60 per cent since last September...

Binance was final destination for millions in funds from Bitzlato

News - January 20, 2023 0
Binance is the world's largest crypto exchange, handling billions of dollars in trading volumes on a daily basis.STR | NurPhoto via Getty ImagesFederal prosecutors...
© 2022 Venture Current is a Flag Media LLC Publication. All Rights Reserved.
VC is part of the FLAG Token rewards network. Clients and partners can use FLAG Tokens for VC products and services.
VC runs 'Automatic' software. Stories posted here come from generic-topic Google news RSS feeds as well as client and partner-approved content.
If a story appears on this page that needs to be deleted due to licensing issues, please message us immediately so we can help you.