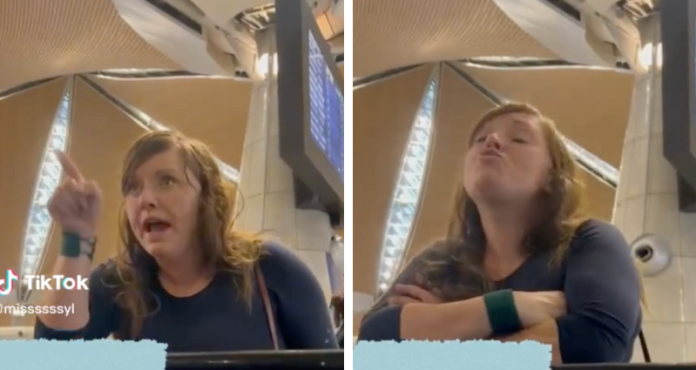 A short clip of a foreign tourist berating an airline staff member at Kuala Lumpur International Airport (KLIA) has gone viral on TikTok.

Uploaded on Tuesday by TikTok user Yully Lee (@missssssyl), an airline ground staff member, the 16-second clip shows a woman verbally attacking Lee’s co-worker. The caption asked, “What would u do if people like this attack you for no reason?”

More from NextShark: Korean TikToker who spent 10 years taking care of her ill husband reveals he has died

In the video, the woman slams her hand and Norwegian passport onto the counter, threatening to call the embassy on the worker’s “motherf*cking ass.” The woman proceeds to cross her arms and make kissing faces, mocking the staff member.

The video concludes as the woman says “f*ck you” and demands the staff member’s name.

TikTok users dubbed the woman “KLIA Karen,” with “Karen” being a slang term often used to refer to white women with an enlarged sense of entitlement.

“The woman had gone into the airplane and then she claimed that she had left some of her stuff and demanded to go out, but she was not allowed to do so, hence she made a scene,” Imran explained. “She was arrested and we charged her for behaving indecently and she was fined RM100.”

In response to the video, one user commented, “Customer not always right.”

“We stay classy. They have nothing on you girl. Jealousy,” another wrote in support of Lee.

Another comment wondered if the abusive tourist was intoxicated, asking, “Is she drunk?”

More from NextShark: ‘You are kind and gentle’: TikToker helping an elderly Asian woman cross the street warms hearts

News - January 5, 2023 0
The funeral mass for Pope Emeritus Benedict XVI, who passed away on Saturday at the age of 95, is being held in Saint Peter's...

News - September 19, 2021 0
A prominent crypto strategist and trader says he’s pulling out of his altcoin positions as he believes Bitcoin and Ethereum are poised for a...

News - November 12, 2022 0
FTX’s former CEO is being replaced by one of the men who oversaw Enron’s bankruptcy proceedings. There’s irony in that news. John...
© 2022 Venture Current is a Flag Media LLC Publication. All Rights Reserved.
VC is part of the FLAG Token rewards network. Clients and partners can use FLAG Tokens for VC products and services.
VC runs 'Automatic' software. Stories posted here come from generic-topic Google news RSS feeds as well as client and partner-approved content.
If a story appears on this page that needs to be deleted due to licensing issues, please message us immediately so we can help you.