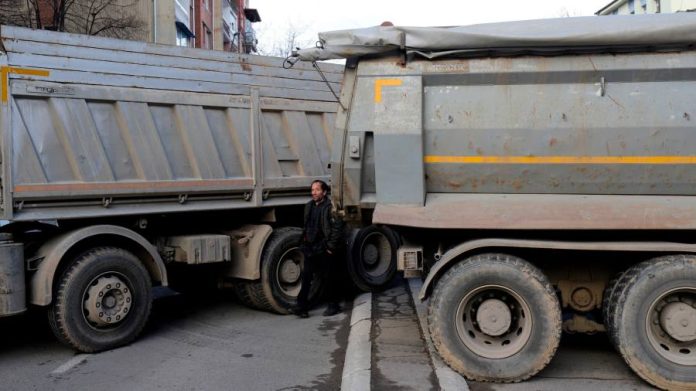 Kosovo closed its main border crossing with Serbia on Wednesday as months of tensions between Belgrade and its former western Balkan province threatened to spill over into conflict.

Serbia put the military forces it has sent to the border with Kosovo on the highest state of combat alert and Belgrade threatened to step in to defend ethnic Serbs if international peacekeepers could not defuse the tensions, which stem from a dispute over the issuing of car licence plates by Pristina.

Serbian president Aleksandar Vučić on Tuesday accused Kosovo of preparing to attack ethnic Serbs in the north of the country and vowed to “protect our people [in Kosovo] and preserve Serbia”. Protests by ethnic Serbs against Pristina’s authority, including walkouts in government offices and the installation of roadblocks in cities and along the border, have continued for weeks.

Belgrade has said it will never recognise its former province, which unilaterally broke away from Serbia in 2008, as a sovereign country. Both sides appear serious about the possible use of force, analysts say, with the international community’s control over the situation weakening in recent months.

“The chance for confrontation is real,” said Milos Damnjanovic, a regional expert with the Belgrade-based BIRN consultancy, adding that Belgrade had stopped gently pressing Kosovo Serbs to accept some degree of integration.

“[Kosovo premier Albin] Kurti appears to think the he can use force to impose integration on Kosovo Serbs without giving anything in return,” he added. “The risk is doubly real because Belgrade is backing [ethnic] Serbs to resist being integrated on Kurti’s terms.”

The EU and US on Wednesday issued a joint statement calling for “maximum restraint” and actions to de-escalate the “continued tense situation in the north of Kosovo”.

Both the EU and US were working with Vučić and Kurti “to find a political solution in order to defuse the tensions and agree on the way forward in the interest . . . of all communities”, said spokespersons for the EU’s foreign policy arm and the US state department.

Brussels and Washington also welcomed assurances from Kosovo that “no lists of Kosovo Serb citizens to be arrested or prosecuted for peaceful protests/barricades exist”.

After months of talks including several meetings of the countries’ leaders with US and EU diplomats, a solution was deferred until next year and both sides agreed to undertake measures to safeguard peace.

But after hundreds of ethnic Serb police and government workers quit their jobs rather than administer the reforms requested by Pristina, the resulting security vacuum prompted the Kosovo government to press for an immediate solution.

Ethnic Serbs perceived that as a threat and the ensuing protests became highly volatile. Pristina asked the Nato-led KFOR international peacekeeping mission, which has just under 4,000 troops on the ground, to help it remove the roadblocks and added Kosovo would do it on its own if KFOR could not.

“KFOR remains extremely vigilant and has the capability and personnel to provide . . . freedom of movement for all communities,” KFOR said on Wednesday. “KFOR continues to closely monitor the situation on the ground and the activities along the [Serbian border], supporting dialogue to find an agreement to defuse tensions in northern Kosovo.”

“Serbia, influenced by Russia, has raised a state of military readiness and is ordering the erection of new barricades in order to justify and protect the criminal groups . . . in Kosovo,” Kosovo interior minister Xhelal Sveçla said late on Tuesday after new barricades in the city of Mitrovica were erected.

Serbia denies it is trying to destabilise Kosovo or has links to criminal groups in the country.

With Moscow one of Belgrade’s biggest allies, Russia’s full-scale invasion of Ukraine gave the west a sense of urgency to resolve the Kosovo issue. Renewed conflict would greatly reduce the prospects of the countries joining the EU and Nato and threaten European unity as the Ukraine conflict continues.

“Serbia is defending the rights of Serbs who live nearby in difficult conditions. Of course, they react severely when these rights are violated,” Peskov said on Wednesday, according to Interfax.

In an effort to defuse tensions, a Kosovo court said on Wednesday that Dejan Pantic, a former policeman whose arrest fuelled the current protests from his fellow Kosovo Serbs, would be released from custody and placed under house arrest. Pantic was held in early December on charges of assaulting a serving police officer.

Vučić on Tuesday said Serbia would “continue to fight for peace and seek compromise solutions”.

News - May 29, 2022 0
Baltic politicians have lashed out at French and German leaders for discussing with Russian president Vladimir Putin how to unblock Ukrainian ports, highlighting the...

‘My heart was in my throat’: how one woman escaped from Kabul

News - August 25, 2021 0
The call came long after dark. At 11pm on Thursday night, Shaqaiq Birashk received a message telling her to be ready. Twenty minutes later...

News - December 2, 2022 0
A Somerville startup and an academic lab in Seattle say they have developed a way to use artificial intelligence to design proteins that don’t...

News - March 12, 2022 0
Video Duration 24 minutes 50 seconds 24:50 From: Inside StorySome users can now call for violence against Russian soldiers.Meta, the company that owns...
© 2022 Venture Current is a Flag Media LLC Publication. All Rights Reserved.
VC is part of the FLAG Token rewards network. Clients and partners can use FLAG Tokens for VC products and services.
VC runs 'Automatic' software. Stories posted here come from generic-topic Google news RSS feeds as well as client and partner-approved content.
If a story appears on this page that needs to be deleted due to licensing issues, please message us immediately so we can help you.