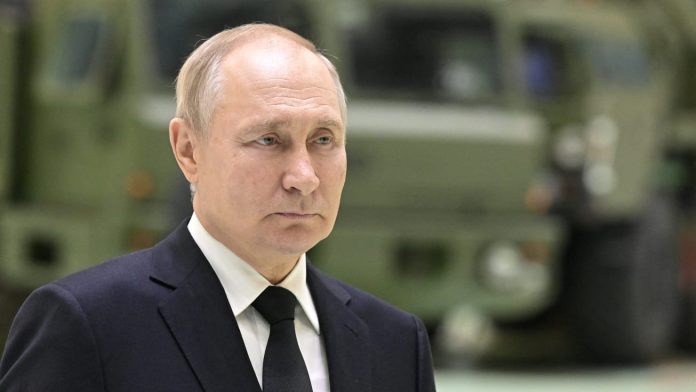 Russia is on edge as American and European leaders meet in Europe to discuss delivering more weapons and military aid packages to Ukraine, with the Kremlin warning that more deliveries of weaponry to Kyiv will bring the conflict to a “new level.”

“This will mean taking the conflict to a whole new level, which certainly will not bode well in terms of global European security,” Kremlin spokesperson Dmitry Peskov said, according to TASS. “Naturally, the very discussion of the acceptability of supplying Ukraine with arms which would allow strikes to be delivered on Russian soil… is potentially extremely dangerous.”

The threat comes days after Ukrainian troops arrived at Fort Sill in Oklahoma for training on Patriot missile systems. It also comes on the eve of a meeting between U.S. Secretary of Defense Lloyd Austin, Chairman of the Joint Chiefs of Staff Army Gen. Mark Milley, and the Ukraine Defense Contact Group Friday at Ramstein Air Base this week to discuss military aid packages for Ukraine aimed at thwarting an expected Russian offensive in 2023.

The Biden administration is currently working to finalize a new weapons package of nearly $2.6 billion worth of military aid for Ukraine, which may include approximately 100 Stryker combat vehicles and 50 Bradley armored vehicles, according to the Associated Press. European countries are pledging to step up assistance as well: On Thursday, 11 European defense ministers and leaders met in Tallinn, Estonia, where they discussed more weapons aid packages for Ukraine.

“We recognize that equipping Ukraine to push Russia out of its territory is as important as equipping them to defend what they already have. Together we will continue supporting Ukraine to move from resisting to expelling Russian forces from Ukrainian soil,” the leaders said in the joint statement.

It’s not clear if the Kremlin has specific plans to escalate in relation to weapons deliveries in Ukraine. But in recent weeks, some authorities in Russia have grown fearful that Ukraine might conduct attacks inside Russia proper after several attacks against Russian airbases inside Russian territory took place last month and have been widely attributed to Ukraine.

Ukrainian authorities have not directly claimed responsibility for the attacks. But some Ukrainian officials have hinted as much. Ukraine’s top military intelligence official, Kyrylo Budanov, warned Russia earlier this month that Russia should expect attacks “deeper and deeper” inside Russia.

The flurry of aid packages for Ukraine are emerging despite some resistance in recent days. Austin was visiting Germany Thursday to try to work with Germany’s new defense minister, Boris Pistorius, and convince him to approve sending German-made tanks to Ukraine, according to The Washington Post. Several countries have pledged that they would be willing to send their German-made Leopard tanks to Ukraine, but have indicated that Germany has been resistant to give its stamp of approval for the delivery out of fear of provoking Russia.

“Consent is of secondary importance here.”

German Chancellor Olaf Scholz has said that Germany would be willing to approve sending German-made Leopard tanks to Ukraine if the U.S. provided Abrams tanks as well, according to Süddeutsche Zeitung.

Although the U.S. Secretary of Defense noted Thursday that the U.S. is prepared to back Ukraine for the “long haul,” no agreement on tanks has been announced so far.

The Pentagon indicated Thursday that the U.S. isn’t ready to commit to an Abrams tanks delivery just yet.

“It doesn’t make sense to provide it to the Ukrainians at this moment” due to “the maintenance and the high cost that it would take to maintain an Abrams,” Pentagon Deputy Press Secretary Sabrina Singh told reporters Thursday.

Pressure is mounting for Germany to make a change. Polish Prime Minister Mateusz Morawiecki indicated that if Germany prolongs its resistance, Poland could pull the trigger and send Leopard tanks without Germany’s approval.

“Consent is of secondary importance here,” Morawiecki said on Polish radio. “We will either obtain it quickly, or we will do the right thing ourselves.”

News - September 21, 2021 0
On Tuesday morning, T-Mobile announced that it has expanded access to its residential 5G Home Internet service in 51 cities and towns throughout Florida,...

The alarm industry is ringing a false alarm on 3G

News - February 21, 2022 0
This year, America’s national wireless providers are sunsetting their obsolete 3G networks as part of longstanding plans to make sure your wireless service is as modern...

Unlocking the Secret Weapon of Your Business

Bundling policies: One way to save money on home and auto insurance

Russia-Ukraine live updates: Russia says some troops will return to base

News - February 15, 2022 0
Some Russian troops positioned near the border with Ukraine will begin returning to their bases Tuesday after completing "exercises," according to the Russian Ministry...
© 2022 Venture Current is a Flag Media LLC Publication. All Rights Reserved.
VC is part of the FLAG Token rewards network. Clients and partners can use FLAG Tokens for VC products and services.
VC runs 'Automatic' software. Stories posted here come from generic-topic Google news RSS feeds as well as client and partner-approved content.
If a story appears on this page that needs to be deleted due to licensing issues, please message us immediately so we can help you.