Almost half of the Ukrainians who have arrived in the UK this year following Russia’s invasion are in work, despite continuing language and other barriers to employment, according to a survey by the Office for National Statistics.

Data collected between July 20 and August 4, and published on Friday, showed that 42 per cent of people who had entered the UK under the Homes for Ukraine and family schemes were in work, up from 9 per cent in April. Almost two-thirds had found a permanent job.

Meanwhile, more than half of those not in work said they were likely or very likely to look for work in the next 30 days.

Ukrainians fleeing Russia’s war on their country have been granted exceptional rights to work in the UK. Most refugees or asylum seekers are barred from doing so until their status is regularised, which can take years.

The newcomers found jobs despite 43 per cent of those with a qualification gained abroad saying British employers had generally not recognised it in the application process. Half of them also reported significant barriers to employment, notably not possessing an adequate level of English.

But amid record vacancies in the labour market, about one-third found work in accommodation and food services, while 16 per cent were working in manufacturing and trade.

The survey found London to be the preferred destination, with 34 per cent of Ukrainians living in the capital, up from 31 per cent when they were first interviewed in April.

This percentage is likely to increase as almost half of those living in other parts of the country and considering moving within the UK said they were drawn to the capital.

For roughly two-thirds of the people surveyed, the sectors they were now employed in were not the same as when they were in Ukraine. In fact, almost half of respondents reported they had taken any available job. 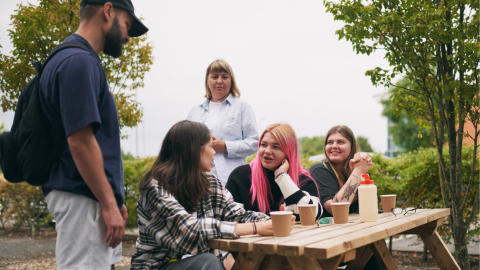 Hugh Stickland, of the ONS, said that while “more Ukrainian nationals have now had time to find work since they first arrived in the UK . . . many are struggling to find work due to their qualifications gained abroad not being recognised by UK employers or who are struggling with the English language requirements”.

Andy Hewitt, head of advocacy at the Refugee Council, said that, although the charity was “enthused by these employment statistics”, refugees and asylum seekers needed an official point of contact to seek advice from in relation to visas and benefits.

He also urged the government to address barriers relating to the recognition of overseas qualifications, saying: “It’s ridiculous when you have a shortage of dentists in the country that you could have a qualified dentist stacking shelves.”

The Home Office said: “Taken together, our generous Homes for Ukraine and Ukraine Family schemes are one of the fastest and biggest visa programmes in UK history, with over 175,000 visas issued and more expected to come through these uncapped routes.”

“Both routes allow people coming through these routes to work in the UK, so we are pleased people have been able to start work and build their lives in the UK.”

Why is Hamas still an issue? – opinion

News - January 6, 2022 0
Stock futures opened higher Thursday evening as investors looked ahead to a key report on the U.S. labor market recovery at the end of...

News - February 6, 2022 0
But the sell-off of Meta stock is not just negatively affected by the downward sentiment hitting the market as the US Fed takes action...

Intel GPU Chief confirms Arc A770 is getting ready for launch

News - September 12, 2022 0
Intel GPU Chief on Arc: we had obstacles, but we persistedRaja Koduri finally commented on Arc GPU launch, which has seen numerous delays over...
© 2021 Flag Media Group. All Rights Reserved. ** TELL YOUR STORY **
We do not generate news. This digital publication and all Flag Media publications curate Google news using Google RSS Feeds.
Please advise if any posts need to be removed for licensing/copyright issues.