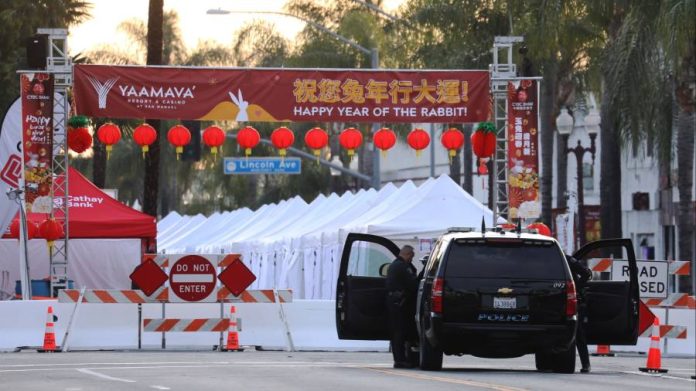 A gunman who killed 10 people and injured 10 more in the Los Angeles area on Saturday night died from a self-inflicted gunshot wound on Sunday afternoon, authorities said.

Huu Can Tran, 72, had opened fire at a lunar new year party being held in a dance hall in Monterey Park, California just after 10.20pm on Saturday, according to police.

The attack in the Asian-majority community was the deadliest instance of gun violence in the US since 21 people were killed in a school in Uvalde, Texas, in May 2022.

Tran escaped the scene to attempt a second attack in nearby city of Alhambra, police said, but his weapon was wrestled out of his hands. Witnesses said he then fled the second scene in a white cargo van.

On Sunday, Tran took his own life when approached by police, authorities said.

Seven of the 10 injured and taken to hospital were being treated on Sunday evening, with at least one person in critical condition. No identities of the victims — five men and five women — have been released.

Los Angeles County sheriff Robert Luna said Tran used a semi-automatic pistol with an extended magazine in the attack. Luna did not share details about a possible motive.

“I still have questions in my mind,” Judy Chu, the Democratic lawmaker representing California’s 28th congressional district, which includes Monterey Park and Alhambra, told a press conference, according to the Associated Press.

“What was the motive for this shooter? Did he have a mental illness? Was he a domestic violence abuser? How did he gets these guns and was it through legal means or not?”

The attack was the 33rd mass shooting to take place in the US this year, according to statistics gathered by the Gun Violence Archive, which counts incidents in which four or more people were shot, excluding the attacker. Three other mass shootings were logged by the archive on Sunday.

US president Joe Biden on Sunday said he had authorised “full federal support to local and state authorities” to aid the investigation into the shooting.

“[First lady] Jill [Biden] and I are thinking of those killed and injured in last night’s deadly mass shooting in Monterey Park,” a statement read. “While there is still much we don’t know about the motive in this senseless attack, we do know that many families are grieving tonight, or praying that their loved one will recover from their wounds.”

I Left My 6-Figure Job at Zillow to Found a Startup. It Was Worth...

News - January 28, 2023 0
There are over 1.2billion of them around the world. Part of its attraction is the sleek design and quick functionality. But the iPhone has so...

News - May 24, 2022 0
Our Moscow bureau chief tells us how this conflict has changed Russia. Source

Early research suggests promising use of AI to predict risk of heart attack or...

UK Conservatives back down on lobbying plan overhaul – WHIO TV 7 and WHIO...

News - November 4, 2021 0
LONDON — (AP) — Britain’s Conservative government backed down Thursday on plans to overhaul lobbying rules for lawmakers amid a backlash over efforts to...
© 2022 Venture Current is a Flag Media LLC Publication. All Rights Reserved.
VC is part of the FLAG Token rewards network. Clients and partners can use FLAG Tokens for VC products and services.
VC runs 'Automatic' software. Stories posted here come from generic-topic Google news RSS feeds as well as client and partner-approved content.
If a story appears on this page that needs to be deleted due to licensing issues, please message us immediately so we can help you.