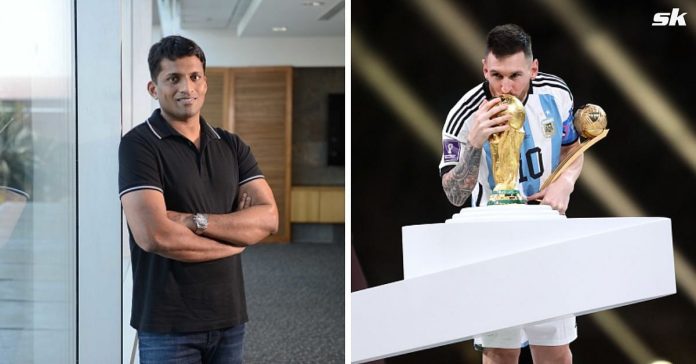 BYJU’S CEO, Byju Raveendran, sent an email to the company’s employees stating that their deal with Lionel Messi eventually worked out.

BYJU’S, an ed-tech start-up company, appointed Messi as their global brand ambassador. However, the move came under massive scrutiny as just a month earlier, the company had laid down 2,500 of its employees, five percent of their 50,000 workforce.

They also recorded a financial loss of 4,589 crores (rupees) in the financial year 2021. The sum is the largest ever recorded by an Indian start-up.

“The deal with Messi is not a typical sponsorship deal. It is a partnership to create social impact. It was something that we signed 6 months back. It is foolish for people to think that we will pay money for Messi after letting people go,” says Byju Raveendran of @BYJUS.

“The deal with Messi is not a typical sponsorship deal. It is a partnership to create social impact. It was something that we signed 6 months back. It is foolish for people to think that we will pay money for Messi after letting people go,” says Byju Raveendran of @BYJUS. https://t.co/hHeeLJdZw3

Raveendran, however, is adamant that the deal with Lionel Messi worked out well for his organization. He sent an email to employees that read (via Business Today):

“Speaking of Messi, it all did work out well in the end for him, didn’t it? A little bit of faith at every step, and a lifetime of learning – this is the not-so-secret formula for his success. There is a lot for us to learn from him and we are privileged to be able to.”

Despite France losing to Argentina in the 2022 FIFA World Cup final, Kylian Mbappe and Lionel Messi shone for their respective countries. Messi bagged a brace and Mbappe scored a hat-trick during the game.

The Paris Saint-Germain (PSG) no. 7 recently told the media that he has spoken with his club teammate since the pulsating encounter. He said (via Hindustan Times):

“I spoke with Leo after the World Cup final. I congratulated him for the win. It was the quest of a lifetime for him, for me too, but I failed, so you always have to be a good player.”

Messi, meanwhile, is still in Argentina. The 35-year-old recently issued a statement apologizing to the people of his hometown Rosario. He said (via Daily Mail):

“Well, we wanted to send our greetings to all the people of Funes, Rosario in general. We would like to thank you for the love you have always shown us, especially now at this time when I have just arrived back from the World Cup. Forgive us as well because sometimes it is difficult to see everyone, we are with family and friends for a few days and sometimes it is complicated.”

News - February 2, 2023 0
KKR has presented a non-binding offer to buy a stake in Telecom Italia’s fixed-line business that could potentially unlock the stalemate over the debt-laden...

Drew Sidora And Ralph Pittman Open Up About Venturing Into Entrepreneurship To Turn Their...

News - August 24, 2022 0
The world has been introduced to Drew Sidora and Ralph Pittman via “Real Housewives of Atlanta.” However, the couple sat down with AfroTech to...

News - August 19, 2021 0
(Reuters) - The U.S. dollar rose to a nine-month high on Thursday as global markets went into a tailspin after minutes of the Federal...

News - January 16, 2022 0
WELLINGTON, New Zealand -- The tsunami threat around the Pacific from a huge undersea volcanic eruption receded Sunday, but the massive ash cloud covering...
© 2022 Venture Current is a Flag Media LLC Publication. All Rights Reserved.
VC is part of the FLAG Token rewards network. Clients and partners can use FLAG Tokens for VC products and services.
VC runs 'Automatic' software. Stories posted here come from generic-topic Google news RSS feeds as well as client and partner-approved content.
If a story appears on this page that needs to be deleted due to licensing issues, please message us immediately so we can help you.