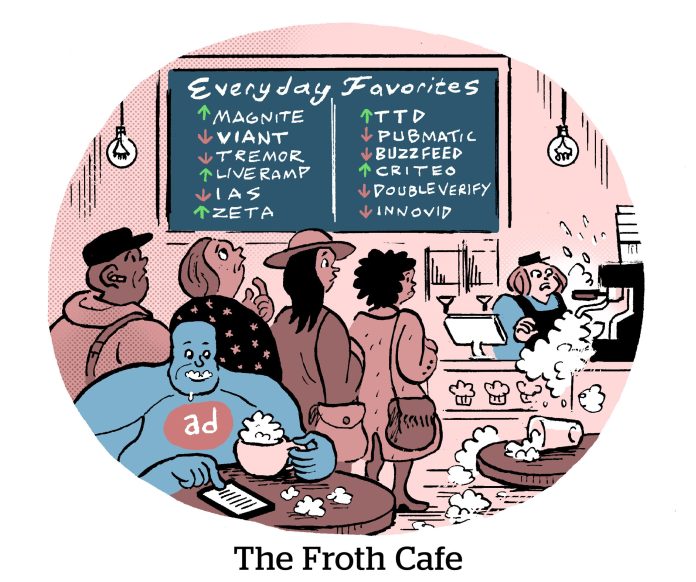 Despite rising interest rates and inflation, 2022 kicked off with a wave of M&A … that turned into a trickle … and became a relative dribble by the end of the year.

The ongoing war in Ukraine, global supply chain issues that just won’t quit, signal loss, regulatory scrutiny, ad spending on the decline, tech and media layoffs on the rise – the storm was perfect.

“You’ve got all of this uncertainty brewing,” Conor McKenna, a director at LUMA Partners, told AdExchanger in July, “and that creates a lot of challenges and puts a ton of pressure on valuations and dealmaking.”

But it was practically inevitable that M&A would slow in 2022 after the breakneck pace in 2021, when acquisitions were up 82% year-over-year, according to LUMA.

Yet there’s little doubt that M&A will be muted in the year to come, with fewer big deals getting done. Especially with antitrust antennas up in Washington, DC.

Even so, hope springs eternal, and one company’s headwind is another company’s potential opportunity. Privacy concerns, identity data-related challenges and targeting alternatives, the growth of retail media and the rise of data clean rooms could all spark interest from strategic acquirers.

In the meantime, though, here’s a thorough (but non-exhaustive) refresher on M&A during the year that was.

January was so jam-packed with acquisitions, we made a joke about it in the January 20 edition of AdExchanger’s daily news roundup: “Are you sick of hearing about M&A already? TOO BAD! We’ve still got multiple deals being announced on the regular.”

And then the bonanza just kept on bonanza-ing, with a mix of low-key acquisitions and blockbuster deals.

By the time January drew to a close, T-Mobile had committed itself to rideshare advertising with its purchase of Octopus Interactive, Take-Two Interactive got into mobile gaming with the acquisition of Zynga, Mayfair Equity Partners took a majority stake in outcome-based ads platform LoopMe, video content management platform QuickFrame was acquired by Ryan Reynolds’s favorite ad tech company, MNTN – and a little company named Microsoft proposed a (now very contested) $69 billion deal to buy Activision Blizzard.

And you have six tries to figure out what the New York Times acquired on the last day of January. (Answer: Wordle.) 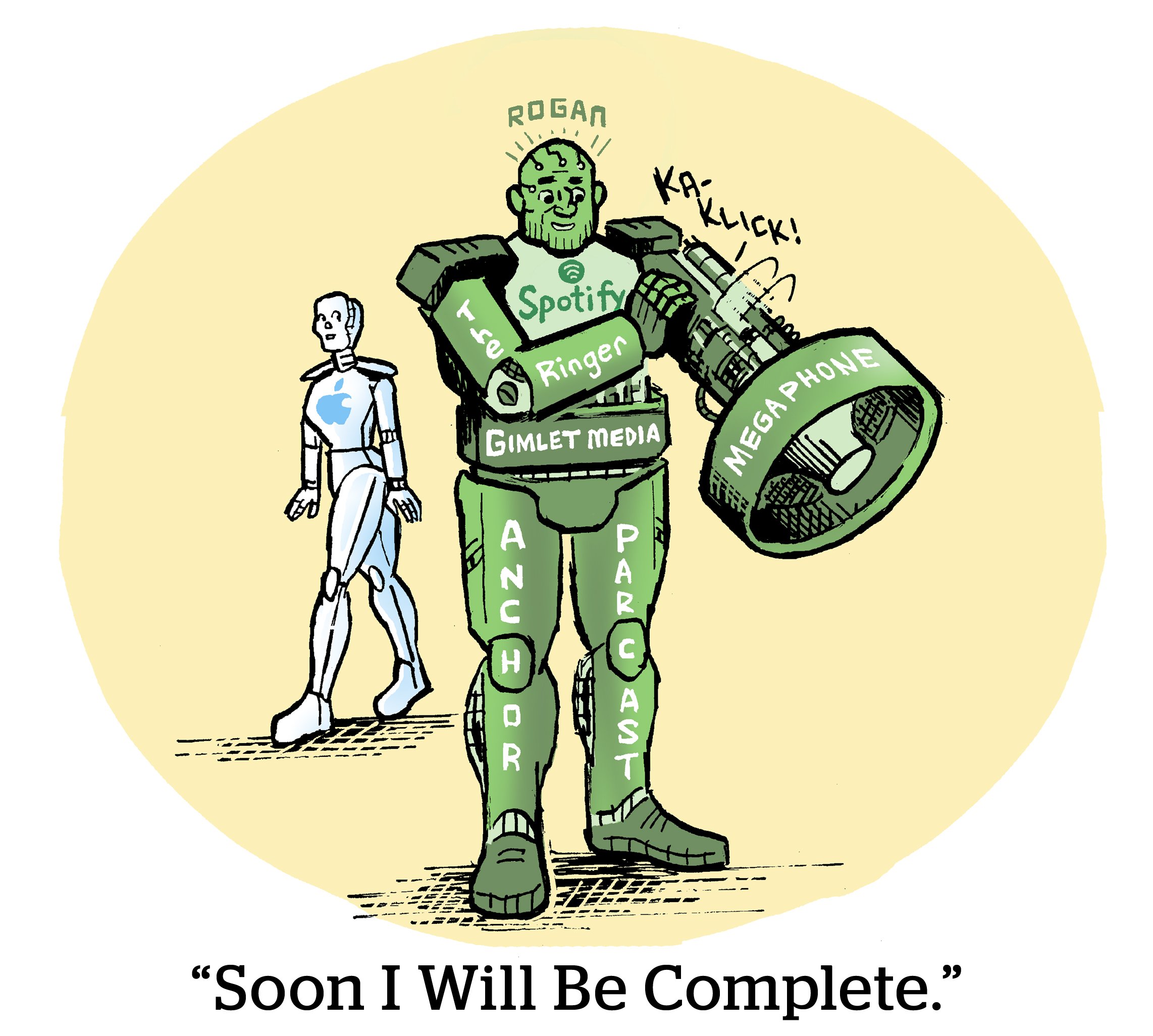 The torrid pace of M&A continued through the winter, although it was a grab bag of deals ranging from media and CTV to social activation and audio.

But the bigger CTV deal by far was Innovid’s $160 million acquisition of TV measurement platform TVSquared to make inroads with linear advertisers. As Innovid CEO Zvika Netter told AdExchanger at the time, CTV may be “all the rage, but our clients are still spending most of their budgets in linear.”

Vox helped close out the month by closing its acquisition of GroupNine, followed by Verisk’s purchase of identity resolution company Infutor.

Despite the first early signs of an economic slowdown, the M&A train kept chugging.

Every manner of deal went down in March:

But the most notable deal, which rounded out Q1, was the $16 billion private equity takeover of Nielsen by Brookfield Business Partners and Evergreen Coast Capital Corp. The move made sense. It’s hard to revamp Nielsen’s entire business while being publicly scrutinized by investors and antagonized by challengers. 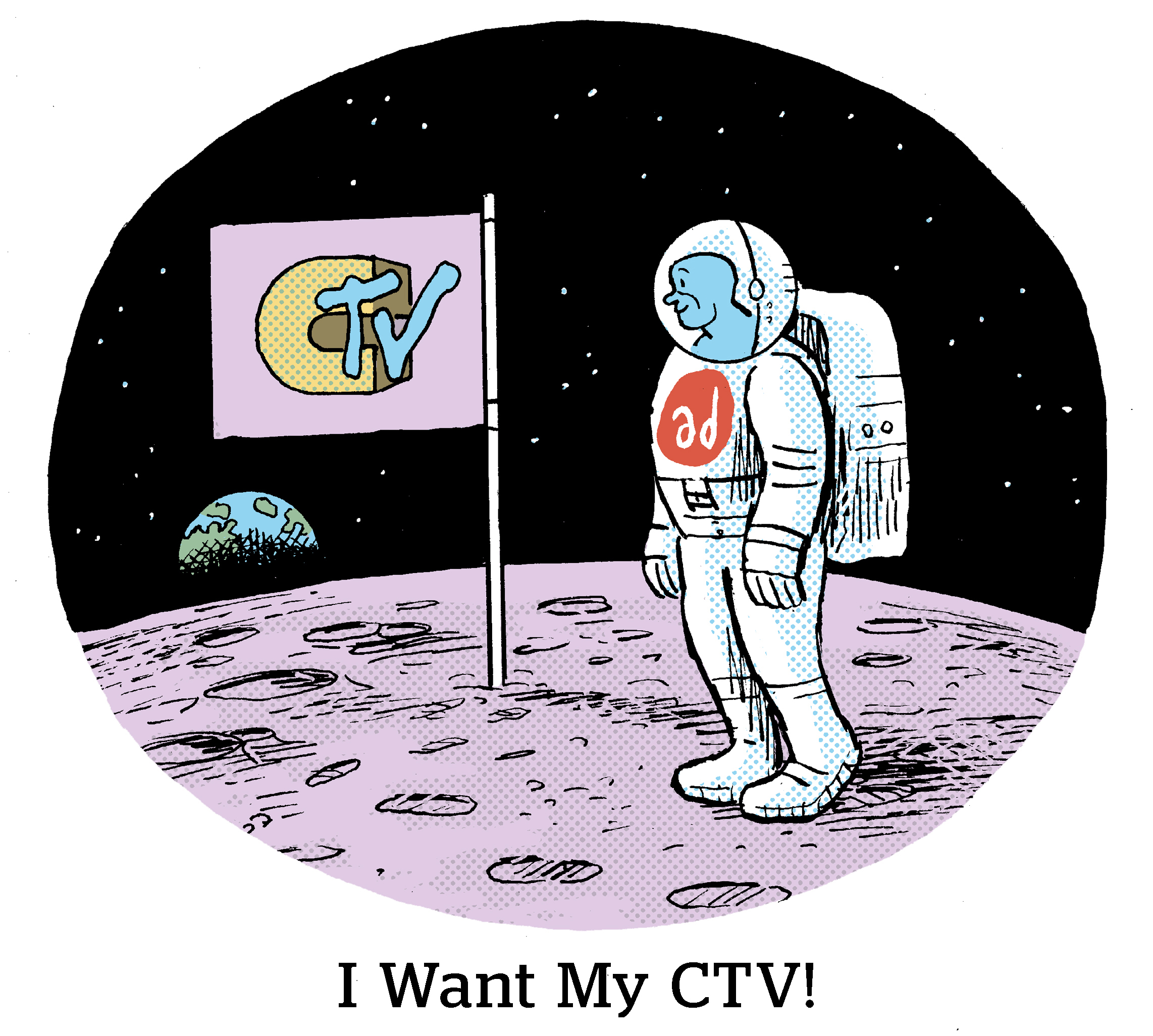 But the bigger headline in April was the completion of the merger between AT&T’s WarnerMedia unit and Discovery to become the Frankenstein’s monster that is now Warner Bros. Discovery.

Mastercard also closed its acquisition of Dynamic Yield, the personalization platform it bought from McDonald’s last year as a complement to SessionM, the CDP Mastercard acquired in 2019.

May was a mixed bag and the start of a marked slowdown in ad tech deal activity.

Although there was a sprinkling of sales throughout June, the pace was still slackening.

Oh, and fun fact: AT&T completed its sale of Xandr to Microsoft. Less than two months later, Netflix would select Microsoft as its ad tech and sales partner to support the streamer’s AVOD ambitions. 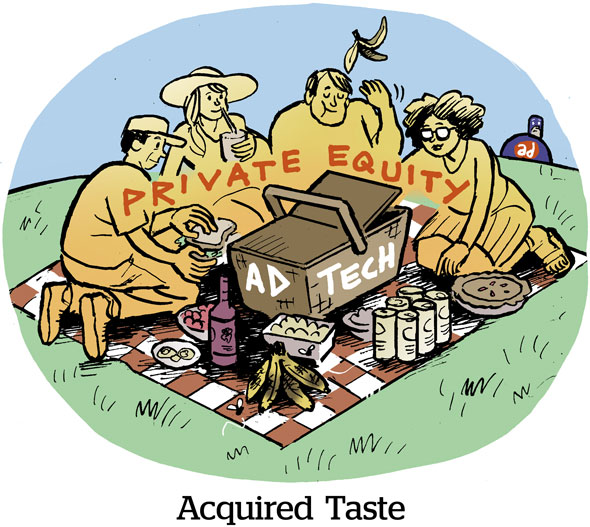 To move from a fun fact to a sobering stat: Excluding digital content, M&A activity was down 21% quarter-over-quarter and down 24% YoY, according to LUMA’s Q2 2022 market report.

And, spoiler alert, total deal volume would be down in the third quarter compared with Q2, largely due to a drop-off in digital content deals, as per LUMA. (Even so, events and publishing company Informa did buy B2B publisher Industry Dive for a cool $525 million in mid-July.)

Yet, if you break out ad tech, deal volume actually increased quarter-over-quarter in Q3, including:

Regardless of downward pressure on valuations (which was arguably necessary after ad tech valuations shot through the roof in 2021), the summer closed with a little heat.

On the media front, Axios sold to Cox Enterprises for $525 million, and Sony did two big things: It completed its $37 billion acquisition of video game developer Bungie (famous for most of the Halo titles) and, separately, acquired mobile gaming developer Savage Game Studios.

In early August, AppLovin offered to buy Unity in an all-stock merger valuing the company at $20 billion, but only so long as Unity didn’t merge with ironSource. A few days later, Unity’s board of directors rejected AppLovin’s bid and reaffirmed the company’s commitment to combine with ironSource.

Ad tech deals were thin on the ground in September, although there were a few notables, including an announcement by PE firm Bridgepoint of its plan to take a majority stake in programmatic media platform MiQ. 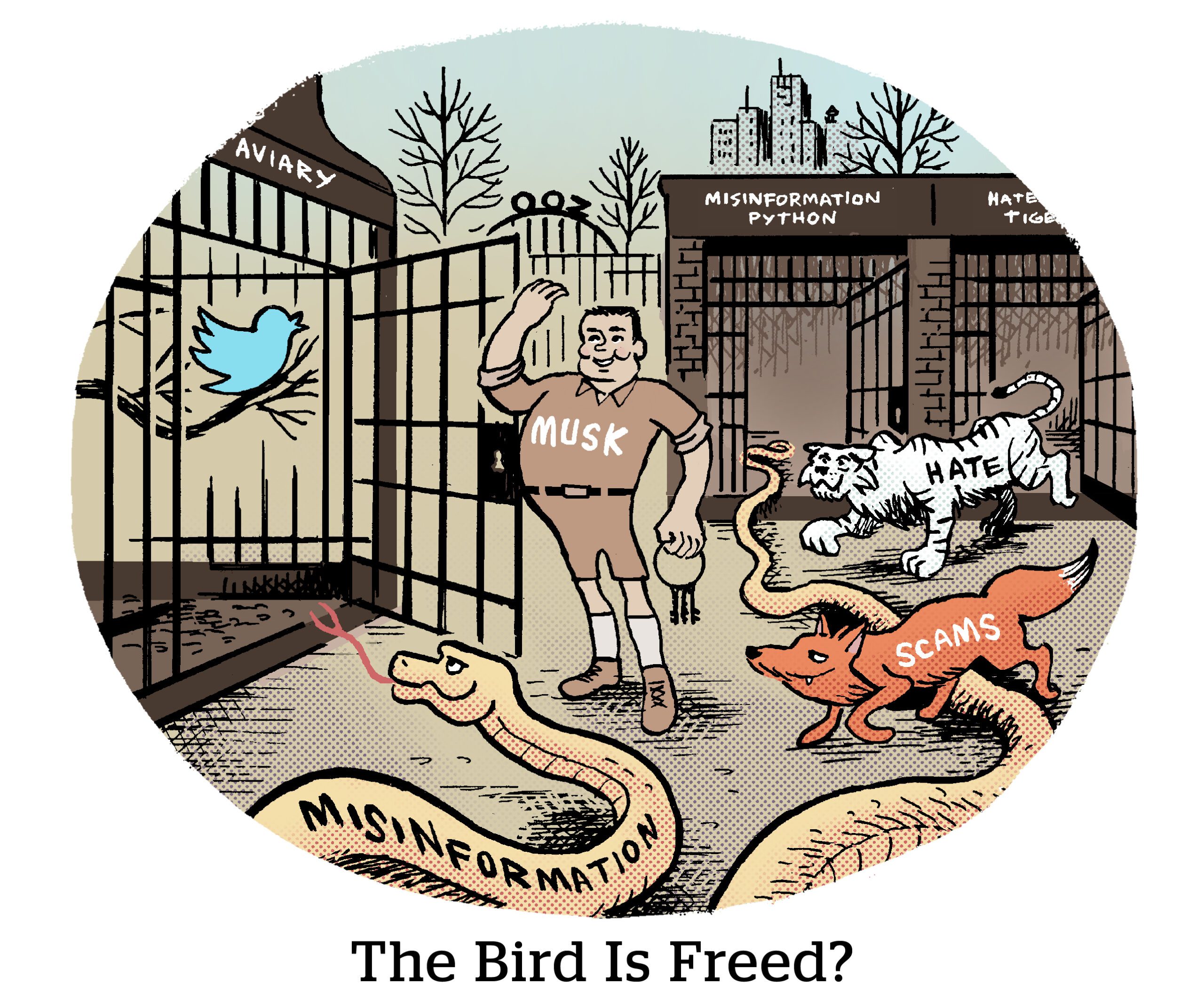 And PubMatic made its first acquisition in more than eight years, taking on the media measurement and reporting platform Martin.

But here’s a question: What does Elon Musk have in common with Kroger?

They’re both putting billions behind a vision.

Musk’s vision apparently involves pouring gasoline on his $44 billion acquisition of Twitter, tossing in a lighted match and seeing what happens.

And so the year has come to a close, ending far quieter than it began.

But search marketplace Ad.net did acquire IntentX, a commerce platform for publishers, with the intent to help pubs grow their traffic and diversify revenue streams, and meme specialist (yes, this is a thing) Doing Things Media announced its plan to buy social media content brand Overheard.

If you got to the end of this article, you deserve a cookie. But not a third-party cookie, obviously. Like, a real cookie. Seriously, head to the kitchen, go spend some time with your family or watch a little Netflix – and we’ll see you next year!

Silicon Valley’s share of US VC funding falls to lowest level in more than...

Double engine failure: There must be full accountability for the Morbi bridge tragedy in...

News - October 31, 2022 0
For the last few months, in the run-up to the next assembly election, the BJP and its government in Gujarat have been loudly projecting...

News - September 5, 2021 0
The S&P 500 and Nasdaq held near records to end the week despite a disappointing jobs report.Both those indices reached all-time highs on Thursday...

News - November 10, 2022 0
Backed by deep-pocketed venture capitalists and private equity funds, health technology startups have sprouted in the diagnostics sector over the past five years, hoping...

News - November 30, 2022 0
The body that oversees London’s Square Mile has told banks and other financial and professional services companies that at least half of their senior...
© 2022 Venture Current is a Flag Media LLC Publication. All Rights Reserved.
VC is part of the FLAG Token rewards network. Clients and partners can use FLAG Tokens for VC products and services.
VC runs 'Automatic' software. Stories posted here come from generic-topic Google news RSS feeds as well as client and partner-approved content.
If a story appears on this page that needs to be deleted due to licensing issues, please message us immediately so we can help you.