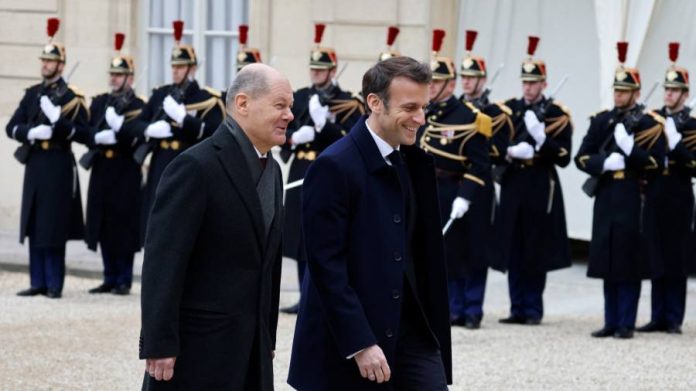 French president Emmanuel Macron and German chancellor Olaf Scholz on Sunday pledged to strengthen the EU and reinvigorate a bilateral relationship that has been strained by the fallout from the Russian invasion of Ukraine and ensuing energy crisis.

In a joint communiqué issued after an event to mark the 60th anniversary of the Elysée Treaty, which ushered in a new era of friendship between the erstwhile foes, both leaders said they would “work together for a European Union that is more resilient, more sustainable and more capable of acting independently”. They would promote this agenda by forging a “strong European foreign and security policy” and by building up “European defence capabilities”.

They also said they would work together to reform EU institutions, turning the bloc into a more effective “geopolitical actor”.

“Our objective is the same: a more sovereign and united Europe that is in control of its own destiny,” said Macron at a joint press conference.

Scholz added: “Franco-German co-operation is needed for progress in Europe as a whole.”

French and German officials said the conference showed the two countries had succeeded in resolving months of tensions that saw them clash over everything from joint defence projects to how to respond to Russia cutting off natural gas supplies to Europe. The disagreements also played out in Brussels, and hampered decision-making at a key time for the EU as it tried to maintain unity during the war in Ukraine.

The frictions came to a head late last year when Paris delayed an earlier plan to host the summit in October, a move officially made for scheduling reasons, but privately French officials admitted was intended as a warning to Germany. Since then, tensions have eased, especially after Paris and Berlin agreed to enter the next phase of development of their next-generation fighter, the Future Combat Air System.

On Sunday, pageantry replaced the earlier rancour, with the French and German cabinets, the heads of both countries’ parliaments and about 300 lawmakers gathering in Paris.

French and German ministers discussed how the EU should respond to the Inflation Reduction Act, US president Joe Biden’s energy package that includes substantial subsidies for everything from electric vehicles to hydrogen technology, and is dragging investment in green technology from Europe to the US.

The communiqué laid out commitments to reinforce Europe’s energy independence and accelerate the fight against climate change, including an agreement to extend to Germany a future hydrogen pipeline that is to be built between Spain and France, known as H2Med.

Although Scholz and Macron vowed to be steadfast in supporting Ukraine and said their positions were “perfectly co-ordinated” with partners, fissures have emerged among European and American backers over whether to send Kyiv modern main battle tanks.

Advocates for the move say such weapons would help Ukraine push back Russian forces and retake territory, but Germany is said to be concerned that giving tanks would be a risky escalation that could drag European countries directly into the conflict.

Scholz has come under heavy pressure in recent days to authorise the export of Germany’s Leopard 2 tank, hundreds of which are held in the arsenals of countries such as Poland that want to send them to Ukraine.

Asked whether he would agree to send the Leopards, Scholz declined to comment, adding only that decisions about military aid to Ukraine should be made jointly by the country’s allies.

Macron said he had asked the French defence ministry to examine whether to send its own main battle tank, the Leclerc. “Nothing has been ruled out,” he said. “Such decisions will be made with our allies . . . and there will be more work to do in the days and weeks to come.”

Are supply chain disruptions the beginning of the end of globalization?

News - October 19, 2021 0
At the end of last week, there were 584 container ships idling off the world’s ports, waiting to be loaded or unloaded. Disruptions in...

News - July 24, 2022 0
The term “forward thinking” provides only an inkling of what runs through the mind of Trinidad and Tobago-born educator Renée Cummings, who’ll be sharing...

Cramer: The big market rally out of nowhere since mid-June is why I tell...

News - August 15, 2022 0
I often tell you to stay the course, as I did in June, reminding you that if you flit out and flit back in...
© 2022 Venture Current is a Flag Media LLC Publication. All Rights Reserved.
VC is part of the FLAG Token rewards network. Clients and partners can use FLAG Tokens for VC products and services.
VC runs 'Automatic' software. Stories posted here come from generic-topic Google news RSS feeds as well as client and partner-approved content.
If a story appears on this page that needs to be deleted due to licensing issues, please message us immediately so we can help you.