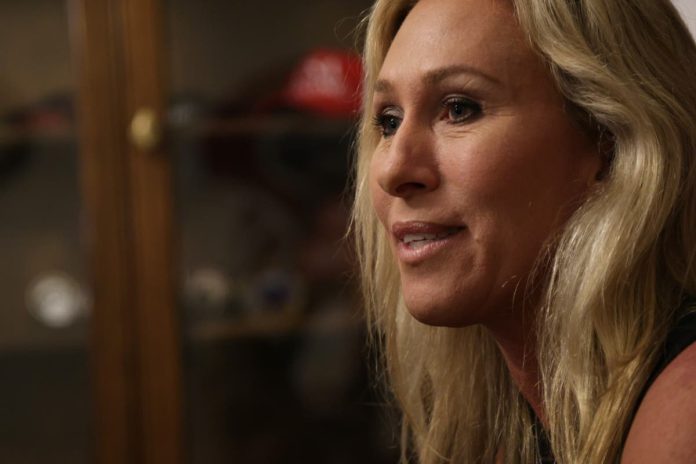 Get our free Inside Washington email

Congresswoman Marjorie Taylor Greene has more than most to celebrate as the new GOP majority takes power in the House of Representatives, and is doing all she can to engineer a Capitol Hill comeback as a result.

The Georgia congresswoman is set to be assigned committee memberships alongside her other Republican and Democratic colleagues in the days ahead, the end to a punishment handed down just a month after she joined the chamber.

It’s a political and strategic victory for Ms Greene, who is rumoured to be a candidate for the powerful House Oversight Committee. And it’s largely thanks to her willingness to get on board with newly-elected House Speaker Kevin McCarthy, who won the gavel after 15 votes despite a rebellion from conservatives in his party.

And her work to cement her power on Capitol Hill continued this weekend on Fox News, where the congresswoman appeared on Howard Kurtz’s Media Buzz and backed away from the QAnon conspiracies which she previously embraced wholeheartedly to the detriment of her standing among independents and Democrats.

Mr Kurtz questioned her briefly about the issue, pressing Ms Greene on her past embrace of the conspiracies. Though there have been too many to mention, a notable example is her past statement suggesting that a California wildfire was started by lasers fired from space by a wealthy family with Jewish heritage, the Rothschilds.

“Well, like a lot of people today, I had easily gotten sucked into some things I had seen on the internet, but that was dealt with quickly early on. I never campaigned on those things,” she told Mr Kurtz.

But despite her insistence that those issues were “dealt with quickly”, Ms Greene has continued to embrace other conspiracy theories openly throughout her tenure in Congress. Before Elon Musk’s takeover of the site, the congresswoman was banned from Twitter after spreading anecdotal data gathered as part of a government programme and claiming that it was proof that the Covid-19 vaccine was significantly dangerous or even deadly.

And Mr Kurtz’s inaccurate description of the House’s decision to strip her committee assignments is also worth noting — nearly a dozen Republicans joined Democrats to do it, and it was largely due to past comments on her social media pages which Ms Greene “liked” that explicitly expressed support for murdering political officials, including then-Speaker Nancy Pelosi.

Ms Greene’s attempts to distance herself from QAnon largely mirror past statements she made in the runup to the House vote to condemn her and strip her committee memberships, when she fought in vain to stop the impending retribution.

“I was allowed to believe things that weren’t true and I would ask questions about them and talk about them,” Ms Greene said in a February 2021 floor speech. “[T]hat is absolutely what I regret.”

News - January 25, 2023 0
PHOENIX (3TV/CBS 5) - Interest rates are sky-high while overall affordability in the Valley is at record lows. Now that the housing market is...

How to navigate return-to-office computing challenges

News - August 14, 2021 0
Computers at the office have been neglected for so long that they were lacking some very... Source

News - October 31, 2021 0
SINGAPORE — Shares in Asia-Pacific rose in Monday morning trade, while data released over the weekend showed China's manufacturing activity in October contracting for...
© 2022 Venture Current is a Flag Media LLC Publication. All Rights Reserved.
VC is part of the FLAG Token rewards network. Clients and partners can use FLAG Tokens for VC products and services.
VC runs 'Automatic' software. Stories posted here come from generic-topic Google news RSS feeds as well as client and partner-approved content.
If a story appears on this page that needs to be deleted due to licensing issues, please message us immediately so we can help you.