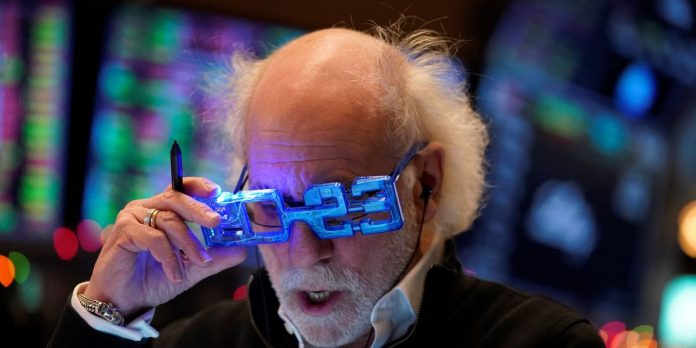 US stocks fell on the last trading day of 2022, closing out the worst year in more than a decade for global equities and bonds.

Even after a surge in dip-buying in the last hour of trading, the S&P 500 ended lower for a third day in the holiday shortened week, leaving the benchmark down almost 20% in 2022. The Nasdaq 100 closed down, shedding a third of its value this year as tech stocks emerged as some of the most vulnerable to rising rates.

In an all-to-familiar playbook for 2022, Treasury yields rose on the final trading day, with 10-year rate touching a seven-week high. The dollar extended its slide, with the Bloomberg Dollar Spot Index falling to a six-month low.

Losses this week scuppered hopes for a rally to close out 2022 — a year when inflation reasserted itself to wipe a fifth in value from global stocks, the worst run since the financial crisis. Bonds lost 16% of value, the biggest decline since at least 1990 for one leading measure, as central banks raced to slow rising consumer prices by hiking interest rates around the world.

“We’ve never seen a market environment like this where both stocks and bonds were down simultaneously,” said Art Hogan, chief market strategist at B. Riley Wealth. “The good news is that we will soon put the year in the rearview mirror. The bad news is that 2023 could be a bumpy ride, at least for the first few months. Weaker economic trends will likely form heading into 2023 as the Fed battles inflation, but a mild recession may help set stocks up for a better second half of the year.”

Concern about the spread of Covid-19 that surfaced this week also weighed on markets, with The Times reporting the UK will require all travelers arriving from China test negative for Covid. The European Commission has asked EU member states to review Covid testing and sequencing procedures and to consider scaling them back up amid increased concern about the virus spreading from China.

After a banner year for stocks in 2021 that saw the S&P 500 climb to consecutive record highs, few foresaw the selloff that ensued. But after rising to yet another all-time high on Jan. 3, fortunes quickly turned as the Federal Reserve signaled determination to rein in inflation. That foreshadowed the onset of the most aggressive rate-hike path in decades, leaving stocks and bonds tumbling in its wake.

With US stocks dragged into a bear-market, the drop in Treasuries sent benchmark 10-year yields to 3.8% from 1.5% at the start of the year. That could present a different outlook for fixed income in 2023 and a revival of the widely followed 60/40 portfolio that got hammered in 2022.

“While stocks will struggle with slowing economic activity and the loss of inflated earnings from inflation, bonds are earning a decent income with the potential for price appreciation as yields come off their peak,” said Bryce Doty, senior portfolio manager for Sit Investment Associates. “The Fed is nearly done raising rates – we expect no raise at the Fed’s May meeting – and inflation is slowing.”

Our new weekly Impact Report newsletter examines how ESG news and trends are shaping the roles and responsibilities of today’s executives. Subscribe here.

Explainer: In tight Canada election, another minority government is likely

A stock market bounce in 2023 is not a sure bet

News - November 1, 2022 0
Stocks get a boost from purchases by mainland funds as traders deem recent sell-off as overdone. Eyes on the Federal Reserve as markets expect...

News - June 18, 2022 0
...
© 2022 Venture Current is a Flag Media LLC Publication. All Rights Reserved.
VC is part of the FLAG Token rewards network. Clients and partners can use FLAG Tokens for VC products and services.
VC runs 'Automatic' software. Stories posted here come from generic-topic Google news RSS feeds as well as client and partner-approved content.
If a story appears on this page that needs to be deleted due to licensing issues, please message us immediately so we can help you.