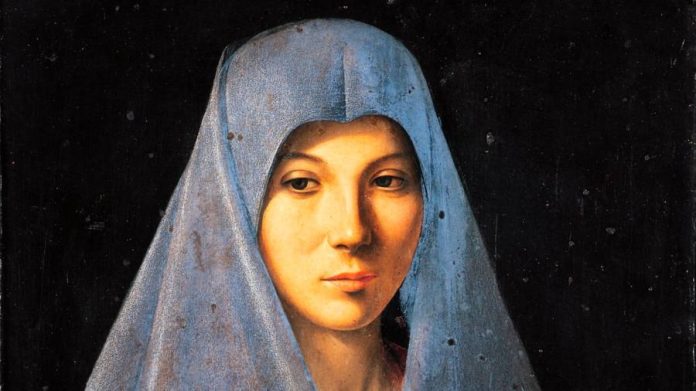 It’s the day before Christmas, which for many of us means a combination of last-minute gift-wrapping and festive preparations. But my mind isn’t on any of that. As is the case at this time every year, I’m thinking mainly about one person: Mary, mother of Jesus. And how, somewhere, a couple of thousand years ago, she was probably in the midst of what women have been doing since the beginning of time: sweating and labouring to give birth to her child. The one destined to bring about both conflict and peace.

I’ve been thinking a lot about Mary’s body, the role it played in this delivery, the pain and the exhaustion, the utter trauma of it all. Traditionally in art, the nativity scene shows either an unusually pale or a blessedly flushed Mary gazing fondly at a rosy-cheeked suckling infant or an impish toddler holding holy court on her lap.

In those images Mary is meek, mild and calm. It is very difficult to find in art history any images that align with my own imagining of Mary as a bold, strong-minded, reflective and determined young girl who pondered the life-upsetting and dangerous things that were asked of her, before accepting the burden.

In my mind, Mary’s labour and delivery seem of equal import to every other part of the Christmas narrative. Especially in this past year, when news story after story has highlighted the strength, courage and resilience of women the world over, from Ukraine to Afghanistan to Iran.

In “Virgin Annunciate” (1476) by Sicilian artist Antonello da Messina, we encounter a rare depiction of the Annunciation. There is no sign of the Angel Gabriel. A young, solemn Mary is alone, in the midst of reading, most likely the Hebrew holy texts, when she’s disturbed by someone. Presumably Gabriel, but also by us, the viewer. With her left hand she pulls her blue veil modestly closed at her chest, but her right hand reaches out as if to halt whoever is disturbing her personal time.

Behind her is a dark empty space that offers no clues as to where she might be or what her past history is. There is no halo, no nimbus, nothing suggesting that she has any more special ability than any other girl or woman (and we can be sure that she wasn’t the only poor, young, unwed virgin in the world).

What would it mean for any of us to consider ourselves allies to the women whose bodies are today on the front lines of conflicts?

I love this image of Mary because I assume she has heard Gabriel’s invitation, and that the gesture of her right hand indicates she needs a minute to receive it. This Mary, who reads and thinks, seems in the midst of serious consideration. Will she accept the seed of peace in her womb, nurture it and deliver it into an unjust and aching world? I try to imagine her contemplating all that is at stake in her “yes”. Her pending marriage to Joseph, her reputation, her livelihood, not to mention the huge political implications: the child would be given the throne of King David, meaning vast social upheaval.

I suspect she was counting the cost of her participation. I love the fact that she is looking directly at us, implicating us in Gabriel’s asking. I cannot help but think of women across the world today who are doing whatever they can to seek justice and peace for themselves, their families and communities. They share with Mary that same mix of conviction, fear, strength and courage.

In the 1891 painting “The Nativity”, American painter Julius Garibaldi Melchers offers a tender yet powerful depiction of the holy family shortly after Jesus is born. In a sparsely furnished, lantern-lit room, an exhausted Mary is collapsed on the hard bare floor. Joseph is peering down at the newborn child, in a posture of deep consideration.

We forget that Joseph, in this narrative, was probably the only one to assist in the labour. Surely he has his own fatigue. But he seems to be lost in both wonder and concern over this miracle baby. The infant lies in a makeshift bed. A radiant glowing orb of light encircles his tiny head illuminating his sleeping mother’s face and Joseph’s frame.

In this work we see just a fragment of the consequences of Mary’s “yes”. The toll on her body, the displacement from home and the lack of certainty about what to do next. But what this image also highlights for me is that Joseph said his own “yes” too. He said yes to walking alongside Mary. He was her ally in this.

Mary’s strength is formidable, but she probably could not have done what she did alone. What would it mean for any of us to consider ourselves co-labourers for peace today, allies to the women whose bodies are on the proverbial and even literal front lines of conflicts? It’s funny how the word “peace” is so calm and pleasant-sounding. But to achieve peace often requires so very much from us, a degree of selflessness, of sacrifice, of resilience and some ability to see a greater good beyond what might be comfortable or easy for us as individuals.

Over the past few months, the world has followed the uprising in Iran for women’s freedom after 22-year-old Mahsa Amini died, having been detained by the nation’s “morality police”. She had been arrested for charges of not wearing her hijab properly. Women in the country and across the diaspora protested by taking off their hijabs, cutting their hair, and leading with the cry “Woman, life, freedom”.

Iranian artist Shirin Neshat has a history of using her work to highlight the condition of women in her country. “Woman Life Freedom” is a public commission that was shown in Piccadilly Circus, London, and Los Angeles in early October. The work is an adaptation of her 1995 piece “Moon Song”, part of the “Women of Allah” series, in which Neshat explored the complexity of women’s lives and identities after 1979’s Iranian revolution.

It shows a woman’s hands, stretched out towards us, open-palmed. The left palm is inscribed with Farsi text, an extract from the writer Moniro Ravanipour’s magical realist novel The Drowned, which Neshat says makes “an allegorical analogy between a storm taking place under the sea and the political climate on land”. In the middle of the palm are two bullets, symbolic of the cost of struggle. The right palm is painted with a large paisley motif and petals. For Neshat, this speaks to Iran’s rich heritage. Above the hands, Neshat has added the rallying cry of the current protests: “Woman, Life, Freedom”.

There is no peace without work and without some cost, and that is not in some way born through the labour and the bodies of women. Even the God who chose Mary seems to recognise that. As we celebrate the season in our various ways, maybe we might reflect on what it could look like in each of our lives to be a peacemaker, to work towards peace. For what cause would we be willing to say “Yes”?

Apple Pay may finally work outside of Safari in iOS 16

News - August 1, 2022 0
Apple Pay is one of the easiest and most secure ways to buy something online, but there’s one problem: It only works with Safari....

Medical experts: BA.2 strain of omicron explained and how to stay safe

News - January 30, 2022 0
A new strain of the omicron variant is under the microscope of scientists and medical experts, here in Minnesota and around the world.  It’s...

News - August 9, 2021 0
The suspect, a 40-year-old man from Rwanda, had been living with Maire’s order while he awaited trial after confessing to setting the fire that...
© 2022 Venture Current is a Flag Media LLC Publication. All Rights Reserved.
VC is part of the FLAG Token rewards network. Clients and partners can use FLAG Tokens for VC products and services.
VC runs 'Automatic' software. Stories posted here come from generic-topic Google news RSS feeds as well as client and partner-approved content.
If a story appears on this page that needs to be deleted due to licensing issues, please message us immediately so we can help you.