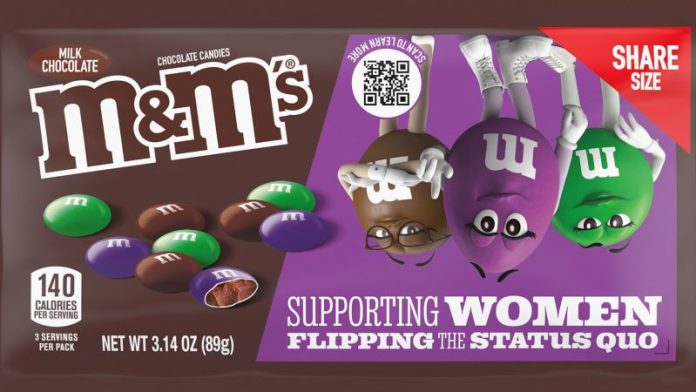 M&M’S is making a statement with its latest candy pack, which features an all-female set of characters — including Purple, its newest addition.

Candy maker Mars announced that the limited edition all-female pack will include only Purple, Brown and Green — the candy’s trio of female characters, who are upside-down on the package — to “celebrate women everywhere who are flipping the status quo.” The packs are currently on sale.

Purple, the “spokescandy” announced last year (and the first new M&M’S character in a decade), is a purple peanut M&M. According to the brand, she is a singer who forgoes high heels for lace-up boots and has a quirky, confident personality.

“The M&M’S brand is on a mission to use the power of fun to create purposeful connections, as we work to create a world where everyone feels they belong,” said Gabrielle Wesley, chief marketing officer for Mars Wrigley North America, in a press release.

The packs come in three options: milk chocolate, peanut butter and peanut. Mars said that a portion of profits will go to organizations that are “uplifting and empowering women,” including She Is The Music and We Are Moving the Needle, nonprofit organizations that support women in the music industry.

“If this is what you need for validation, an M&M that is the color that you think is associated with feminism, then I’m worried about you,” anchor Martha MacCallum said Monday. “I think that makes China say, ‘Oh, good, keep focusing on that. Keep focusing on giving people their own color M&M’S while we take over all of the mineral deposits in the entire world.’”

A graphic on a show even called the candy “woke.”

In addition to adding Purple to the lineup, M&M’S has made other changes to the 82-year-old brand in recent months, including tweaking its logo and giving its six characters new shoes in an attempt to modernize the candies.

However, there was an outsized reaction to Green’s new shoes last year.

An opinion piece in the Washington Post declared “The M&M’S changes aren’t progressive. Give Green her boots back.” In a provocatively headlined article, Rolling Stone described the change as “nothing more than tectonic.” Thousands have signed a petition to “keep the green M&M sexy.”

Changes to beloved characters can provoke a strong response on social media. When Lola Bunny got a new look for the new Space Jam movie, for example, fans were similarly outraged.

“We were incredibly overwhelmed,” she added. “Now we know for certain that M&M’S is a cultural icon.”

M&M’S has no plans to restore Green’s look. “The characters … are continuously evolving to reflect the times that we’re living in,” Hwang said, adding that the brand hopes consumers will “get to know our characters for much more than their footwear.”

US LNG exporters plan projects to capitalise on European shortages

News - August 12, 2021 0
WASHINGTON — Army Futures Command has outlined 11 broad areas of artificial intelligence research it’s interested in over the next five years, with an...

Live news updates: Truss discusses ‘special relationship’ with US in call with Biden

News - September 6, 2022 0
Consumer goods maker Newell Brands on Tuesday said it would cut its revenues and profit outlook for the full year and upcoming quarter, as...

Putin says his Ukraine operation has hardly even started

News - July 7, 2022 0
Russian President Vladimir Putin offered a warning Thursday to those hoping Russia will be defeated militarily in Ukraine: "Largely speaking, we haven’t even yet...
© 2022 Venture Current is a Flag Media LLC Publication. All Rights Reserved.
VC is part of the FLAG Token rewards network. Clients and partners can use FLAG Tokens for VC products and services.
VC runs 'Automatic' software. Stories posted here come from generic-topic Google news RSS feeds as well as client and partner-approved content.
If a story appears on this page that needs to be deleted due to licensing issues, please message us immediately so we can help you.