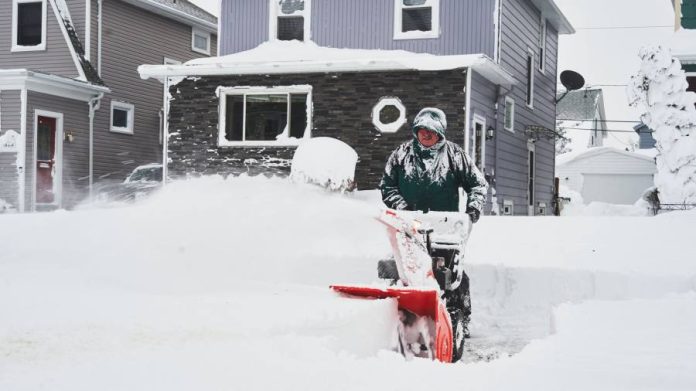 More than two dozen people have been killed and thousands left without power after a blizzard hit western New York state over the Christmas period, in what local officials described as the area’s deadliest snowstorm in decades.

States across the US have been struck by the storm, with the hardest-hit area being New York’s Erie County, which includes the city of Buffalo, the state’s second-largest city.

Speaking on Monday, New York governor Kathy Hochul, who was born in Buffalo, said visiting the area was like “going to a war zone”.

The blizzard, which meteorologists have described as a “bomb cyclone”, denoting a storm that intensifies rapidly, has caused temperatures across the US to plummet to as low as minus 40C over the Christmas period.

The US national weather service had warned last week that more than 200mn people, or roughly 60 per cent of the US population, were under some form of winter weather warning or advisory.

Erie County executive Mark Poloncarz said at a news conference on Monday that the death count had risen overnight from 13 to 25 people. The overall number of fatalities from the storm in western New York was at least 27, with 48 deaths nationwide, the Associated Press reported.

Poloncarz said a number of the deaths were cardiac events related to snow shovelling and snow blowing, adding that this storm was now potentially more deadly than New York’s blizzard of 1977.

He added that as of Tuesday, more than 13,000 people have had their electricity restored but over 12,000 were still without power.

In response to reports of looting in the area, Cooley said it was “unfortunate that there’s some opportunistic criminals in our society”, adding that Buffalo’s police department had made an arrest.

Consumers Pull Back on Major Purchases

News - June 1, 2022 0
U.S. Consumer Confidence as measured by the Conference Board is beginning to slip amid stubbornly high inflation and some are beginning to show reluctance...

Jacob Ward on ‘How Technology is Creating a World Without Choices and How to...

News - February 1, 2022 0
An increasing portion of human life is structured by powerful and opaque technological systems. Getting a loan, parole hearings, resume sorting, the political ads...

News - July 21, 2022 0
Joe Biden has contracted Covid-19 and has started taking Pfizer’s antiviral pill to combat the disease, the White House announced.The 79-year-old US president tested...
© 2022 Venture Current is a Flag Media LLC Publication. All Rights Reserved.
VC is part of the FLAG Token rewards network. Clients and partners can use FLAG Tokens for VC products and services.
VC runs 'Automatic' software. Stories posted here come from generic-topic Google news RSS feeds as well as client and partner-approved content.
If a story appears on this page that needs to be deleted due to licensing issues, please message us immediately so we can help you.