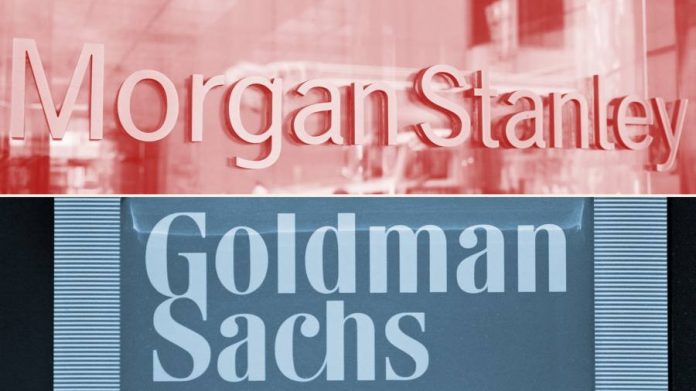 The earnings further underscored the benefits of Morgan Stanley’s expansion into wealth and asset management under chief executive James Gorman. Goldman, however, remains heavily reliant on dealmaking and trading for its profits, businesses that are less valued by investors because of the unpredictable revenues.

Both Goldman and Morgan Stanley had investment banking fees fall almost 50 per cent, amid a dearth of mergers and new stock market listings. However, record wealth management revenues at Morgan Stanley helped to partly offset the declines.

That allowed Morgan Stanley to post fourth-quarter net earnings of $2.2bn, beating analysts’ estimates, whereas Goldman fell short of forecasts with $1.3bn in what chief executive David Solomon conceded was a “disappointing” performance.

Morgan Stanley’s share price closed up almost 6 per cent in New York, while Goldman shares dropped 6.4 per cent. The S&P 500 was effectively unchanged.

Morgan Stanley’s price-to-book ratio, which compares a bank’s stock price against the value of its assets, is currently around 1.7 times, compared to 1.04 times for Goldman, according to Morningstar.

“It’s fair to say our business model was tested this year,” Gorman said on a call with analysts. “We focus on markets we know best.”

Whereas Morgan Stanley has focused on acquisitions that bolstered its wealth management and asset management, one of the critical pillars of Goldman’s efforts to diversify has been its consumer banking business. But Solomon is now scaling back that effort following years of losses and investor unease.

Solomon admitted Goldman had “tried to do too much too quickly” in retail banking following its first foray into the business in 2016 under previous chief executive Lloyd Blankfein.

Part of Goldman’s consumer business is being folded in to a newly formed “Platform Solutions” division that suffered a pre-tax fourth-quarter loss of $778mn, largely because of provisions to cover potential losses on loans Goldman has made to consumer customers.

In what some analysts took as a reference to Goldman, Morgan Stanley’s earnings presentation listed unsecured consumer credit on a list of “What We Don’t Like to Own”.

“It’s very clear that Morgan Stanley just has a lot more durability in its model,” said Christian Bolu, research analyst at Autonomous Research. “It’s something that Goldman is aspiring to but they clearly haven’t gotten there yet.”

Goldman is now doubling down on its asset and wealth management business in the hope that this can replicate the kind of recurring earnings that Morgan Stanley is generating.

“Our number-one priority for asset and wealth management is to grow our management fees. That’s the durability, that’s the predictability,” Goldman chief financial officer Denis Coleman told the Financial Times.

Part of that will be achieved by reducing Goldman’s so-called on-balance sheet investments, a remnant of the era when the bank would wager its own capital for investments. That business can generate lucrative profits in good years but can also force the bank into painful losses, such as $660mn in losses from stock market investments in the fourth quarter.

Goldman is working to sell these on-balance sheet investments while also raising outside funds to invest.

The disappointing few months for Goldman is being felt across the bank, with the company earlier this month cutting about 3,200 employees, roughly 6 per cent of its workforce, as well as embarking on a wide-ranging cost-cutting programme. By contrast, Morgan Stanley cut headcount by 1,800 in December and has no plans for more dismissals, the bank said on Tuesday.

Morgan Stanley is holding extra capital above regulatory requirements that would allow it to make further investments if the right opportunity comes along, Gorman said.

“We’re not of the view that we’re heading into a dark period,” Gorman added. “We want to make sure we’re positioned for growth. This thing will turn, M&A [and] underwriting will come back, I’m positive of it. So we want to be well positioned for it.”

Troy Baker Is Working With NFTs, but Fans Are Unimpressed

News - January 14, 2022 0
Voice actor Troy Baker has announced he is partnering with an NFT company, and his fans are less than impressed. Baker, who is most...

News - April 26, 2022 0
The self-proclaimed republic of Transnistria — which has its own constitution, military, currency and flag but has never been recognized by the international community...

News - May 12, 2022 0
Elon Musk, Tesla and SpaceX chief executive, spoke to Peter Campbell, global motor industry correspondent, at FT Live’s Future of the Car conference in...
© 2022 Venture Current is a Flag Media LLC Publication. All Rights Reserved.
VC is part of the FLAG Token rewards network. Clients and partners can use FLAG Tokens for VC products and services.
VC runs 'Automatic' software. Stories posted here come from generic-topic Google news RSS feeds as well as client and partner-approved content.
If a story appears on this page that needs to be deleted due to licensing issues, please message us immediately so we can help you.